What It’s All About: WORKS Motorsport’s CARB-exempt Turbo Subaru BRZ

Timing is everything. Now whether the best timing is relatively early, on-time, or late depends on what exactly you’re doing. If you’re arriving at a busy party or setting up anti-lag, your timing should be fashionably late. If you’re swinging a baseball bat or turning into an apex, you want to be right on time. And if you’re going to an interview or a track day, it’s probably best to be a bit early. 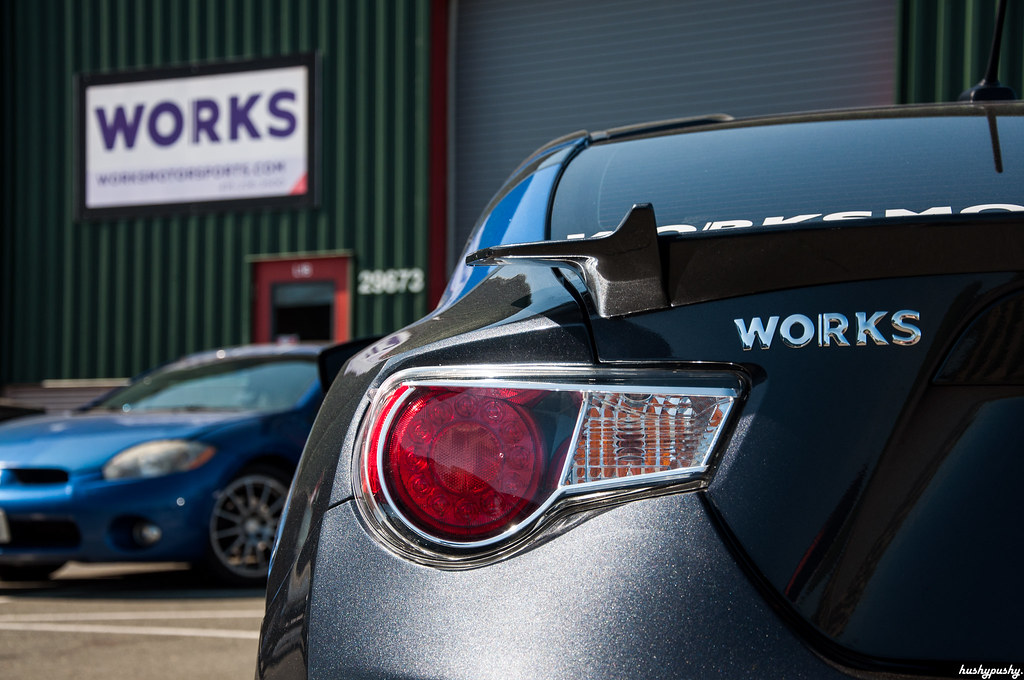 The reason I mention that now is because the timing here is all wrong–a combination of early and late. 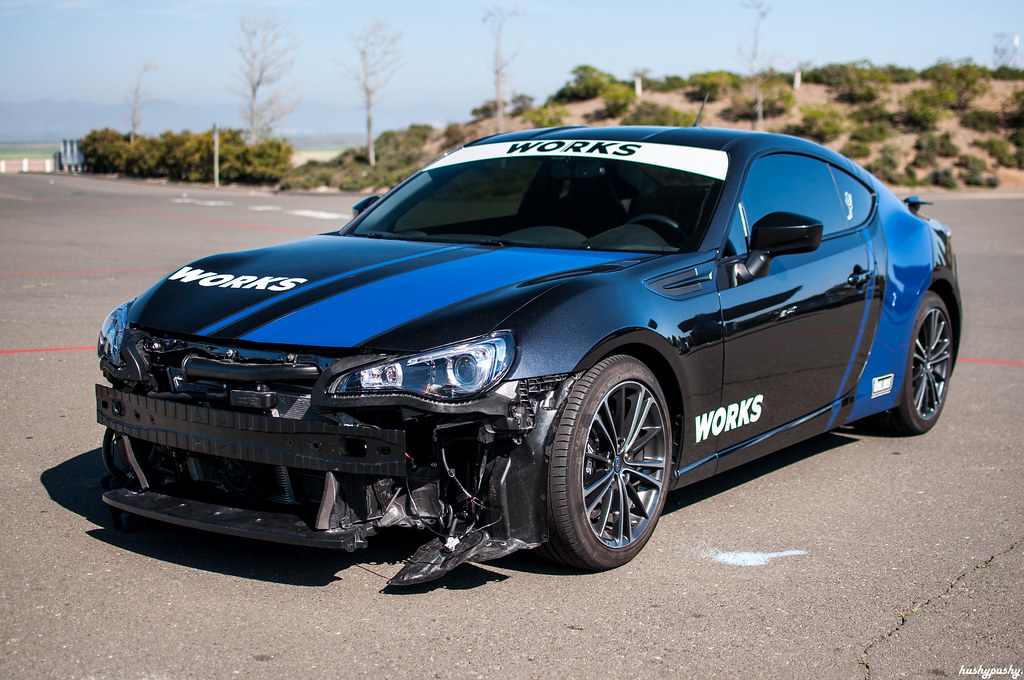 You see, I went to WORKS Motorsports up at Sonoma Raceway with the intention of touring their shop, but what I really wanted to see was their turbo BRZ. 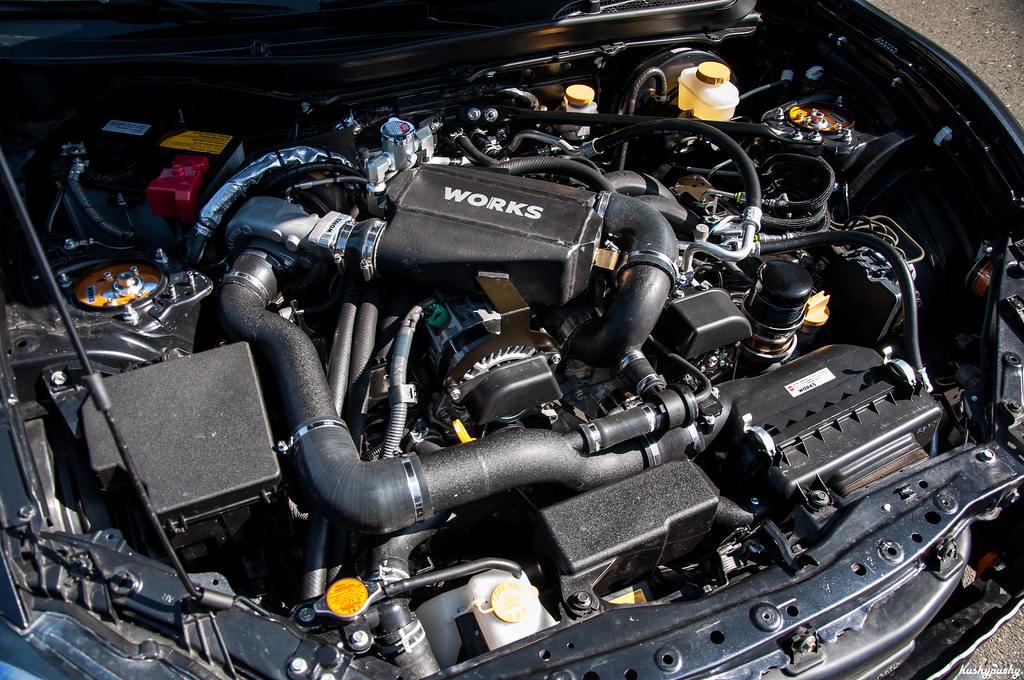 There are plenty of 86’s with snails slapped on them, so what’s the big deal? Well, this small shop not only engineered their own turbo kit, which is quite an accomplishment in itself, but when I came by they were even in the process of clearing the gigantic hurdle of CARB exemption (which essentially means that it’s smog legal in California—quite important for the vast majority of law-abiding enthusiasts in this state). 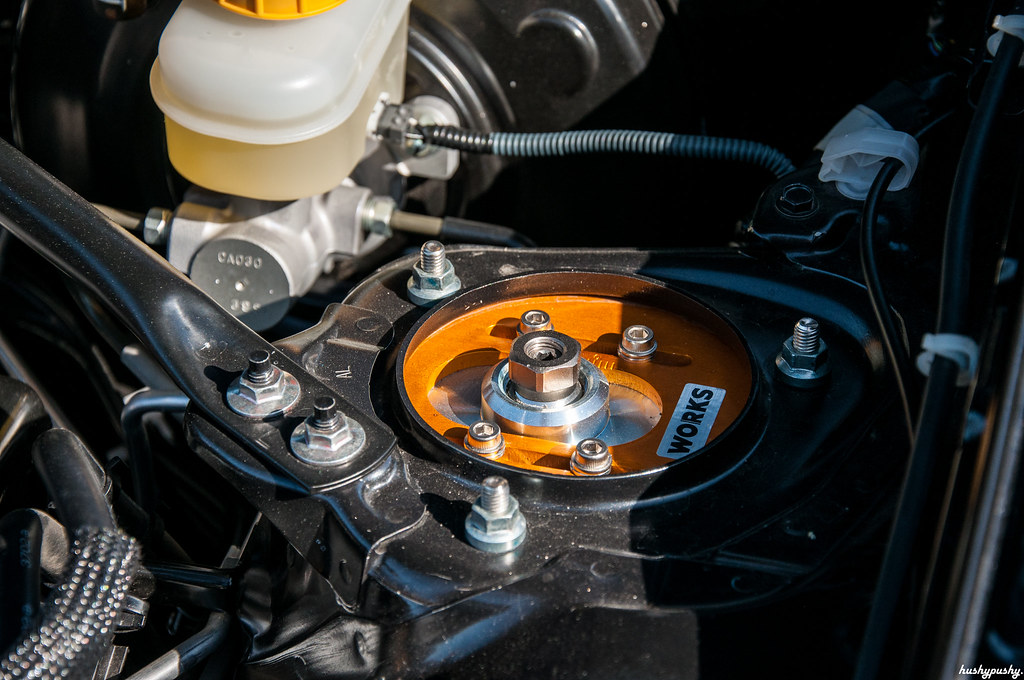 Small, WORKS-branded details are everywhere. Under the hood we can see the Ohlins/WORKS coilovers… 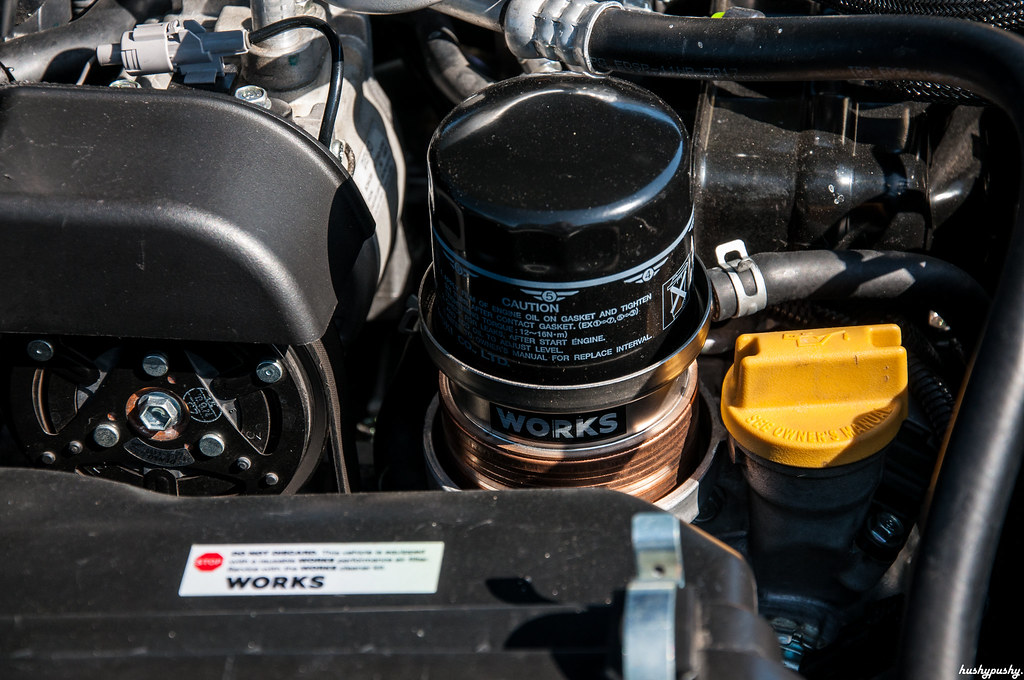 …and the WORKS oil regulator/cooler kit. 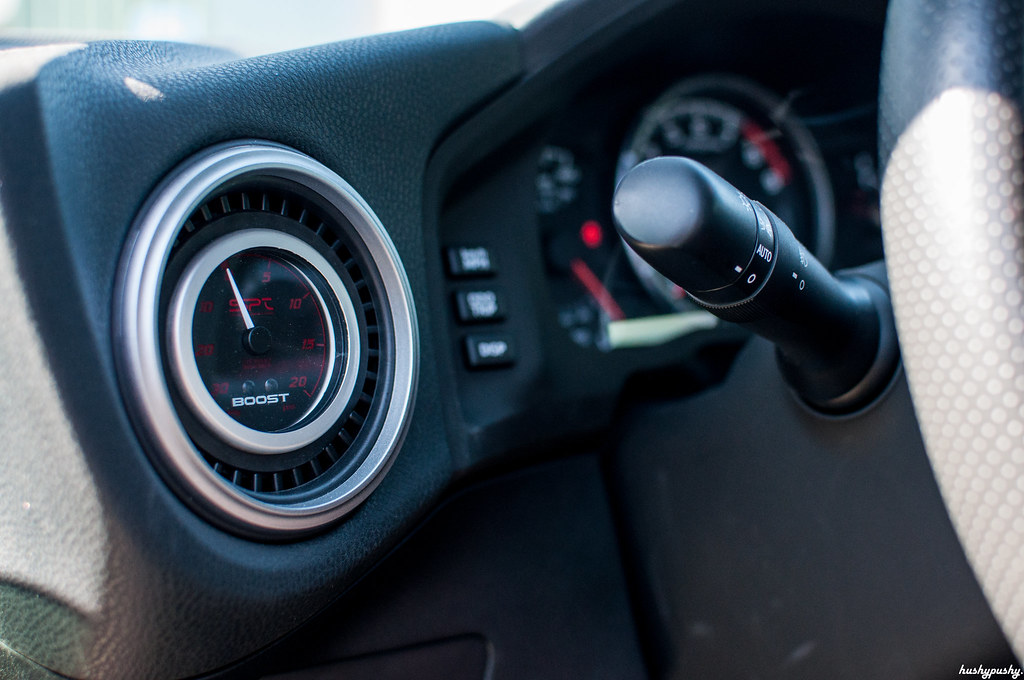 Inside, you’ll find this cool vent-mounted SPT boost pressure gauge as well as… 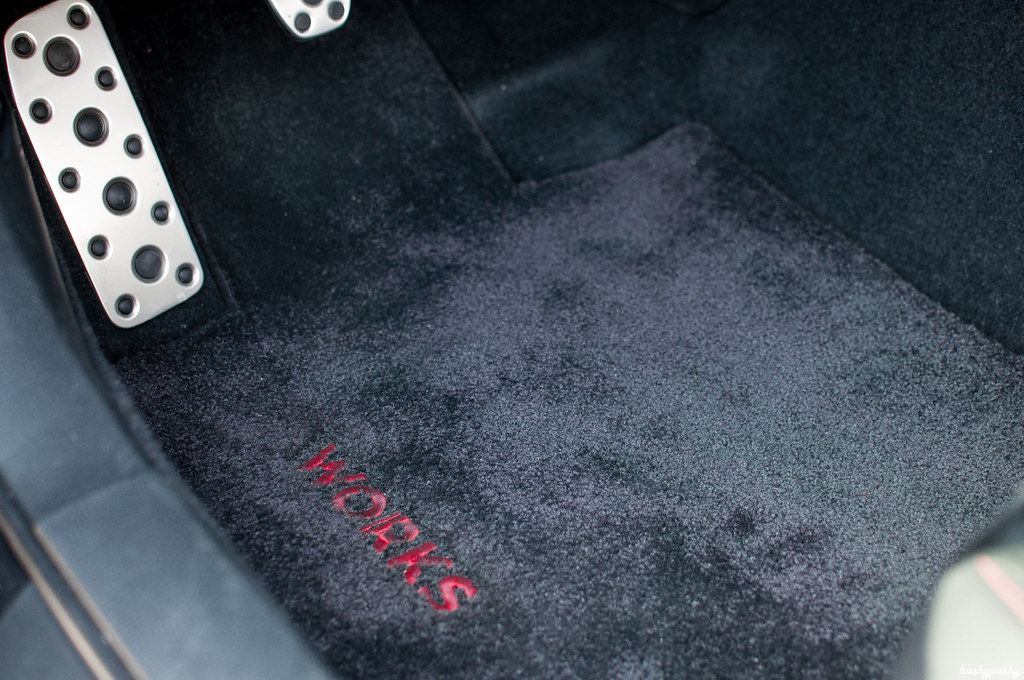 …these sumptuous floormats! If you’ve seen a new BRZ, you know that the floormats are an absolute joke. They’re ugly and don’t wear well at all. In comparison, FR-S mats are at least stylish, but aren’t any longer lasting. These WORKS mats are thick, luxurious, and definitely better than what comes from the factory. 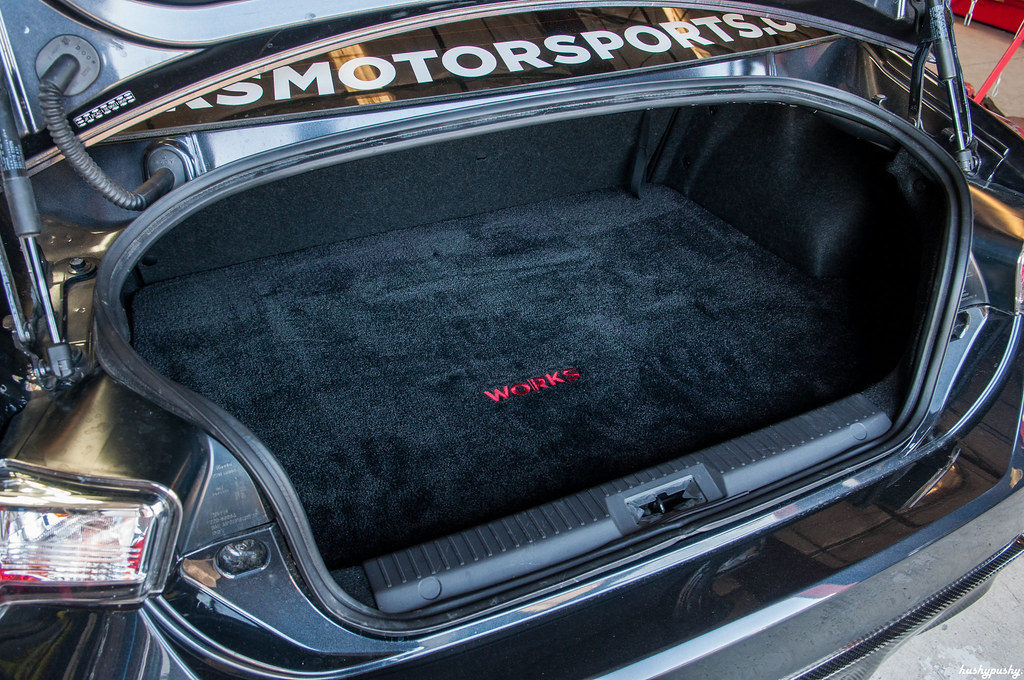 They also make a matching trunk mat, to let your cargo ride in style. 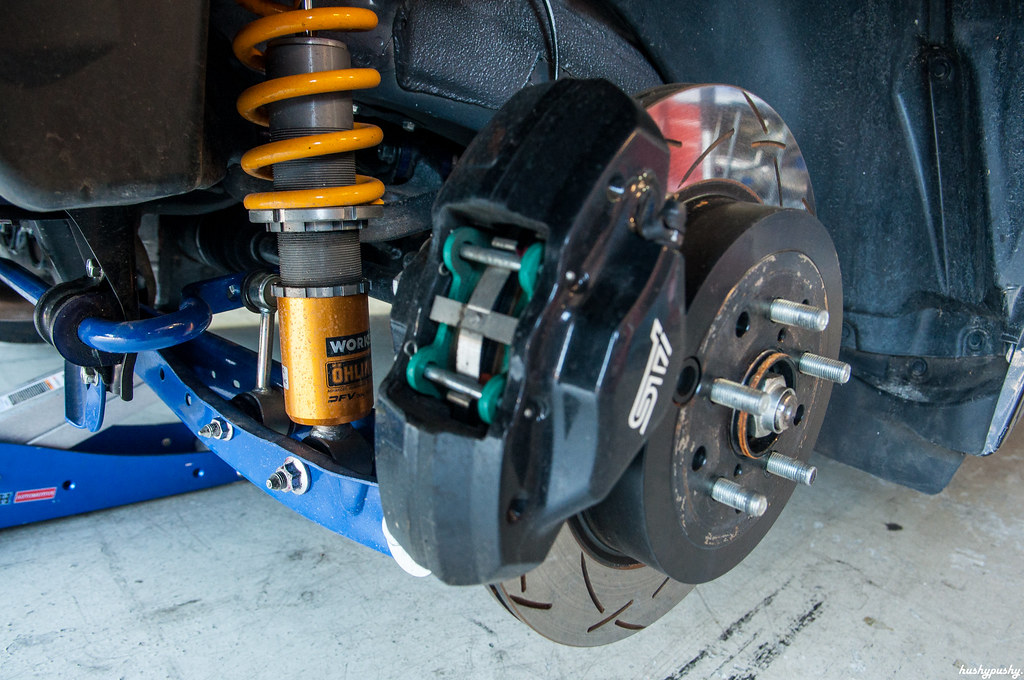 Given the extra power that the turbo packs on (approximately 70hp and 50tq), it makes sense to upgrade the braking and suspension capabilities as well. WRX STi calipers, Project Mu pads, and DBA rotors are used front and rear. 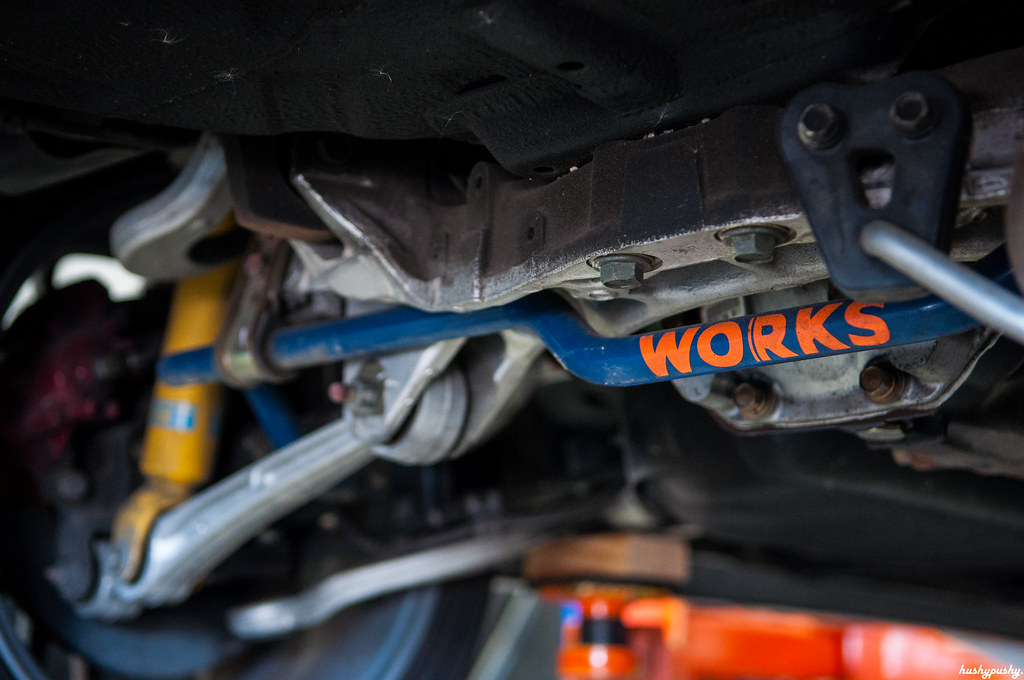 SuperPro provided the sway bars, control arm bushings, and the adjustable rear lower control arm, which allows rear camber to be changed. This particular shot is of a mostly-stock BRZ—notice the difference in mounting points for the shocks and sway bar. 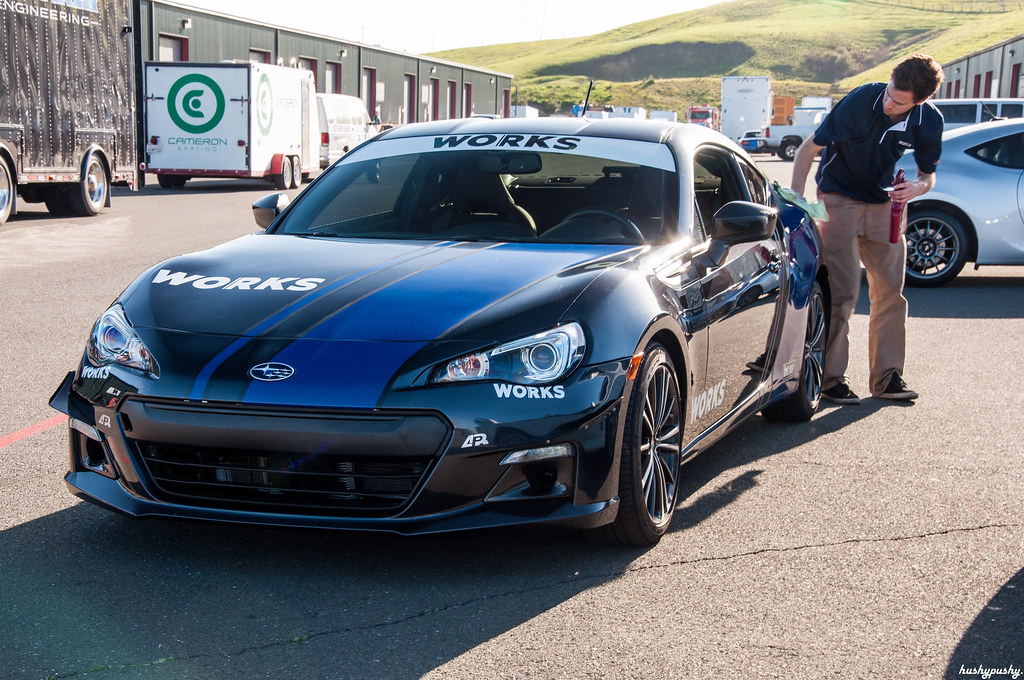 This is the point in the story where the timing aspect comes in. As you saw at the top of this article, when I arrived at WORKS the front bumper had been removed from the car and the stock wheels were installed because they had just brought the car back from testing for CARB. They were able to get the bumper back on, but the wheels weren’t around. Well whatever, I was there, so I decided to grab some snaps anyway. 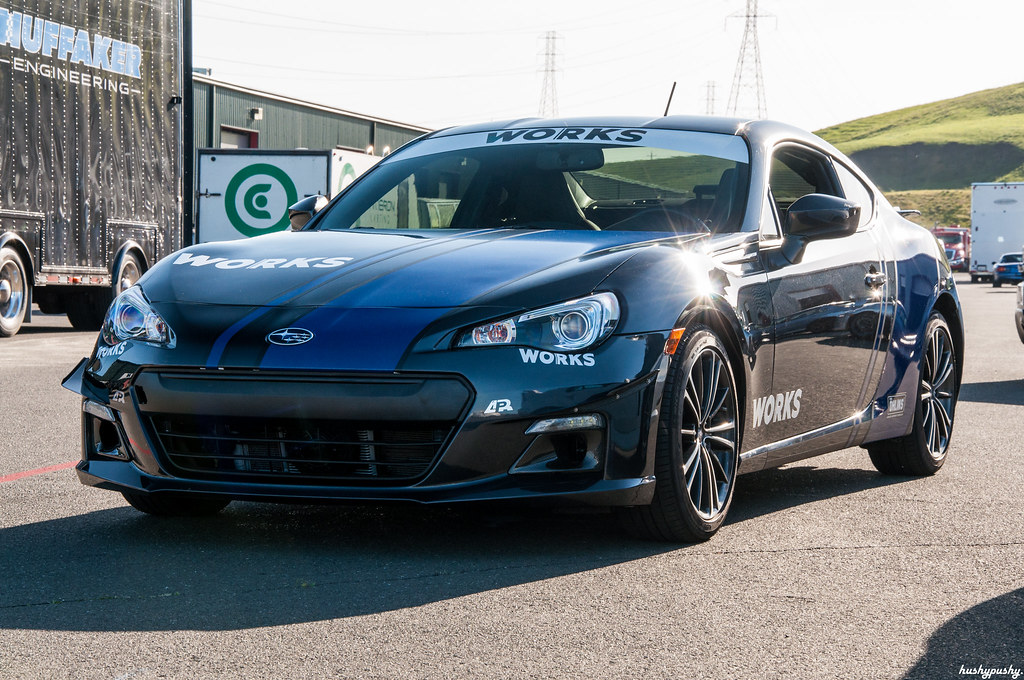 One thing that stood out to me was that rear camber, which looks to be very close to zero. With all the adjustable rear suspension, why would that be? Well, besides being their turbo demo car, this is also the shop’s drift car for the Wednesday night drifting held just a few hundred yards from WORKS’ doorstep. The combination of negative front camber with almost zero rear camber enables front grip at the limit and an easily slide-able rear. 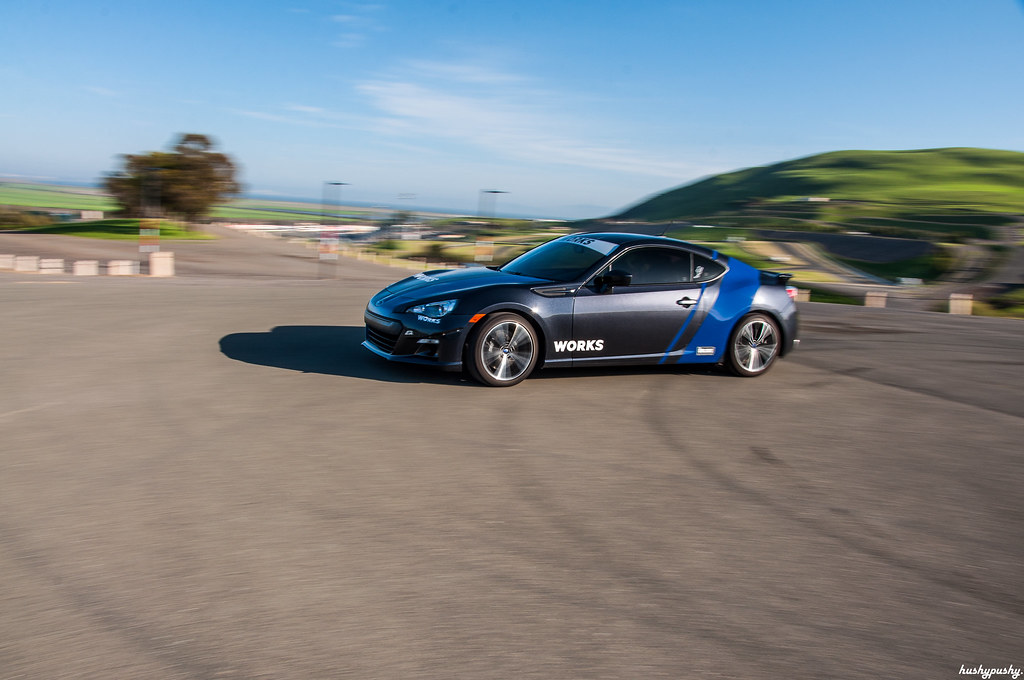 Unfortunately, despite all the empty flat tarmac around the outskirts of the track, there would be no sliding on this day. Predictably, race tracks are a bit strict about that sort of thing. 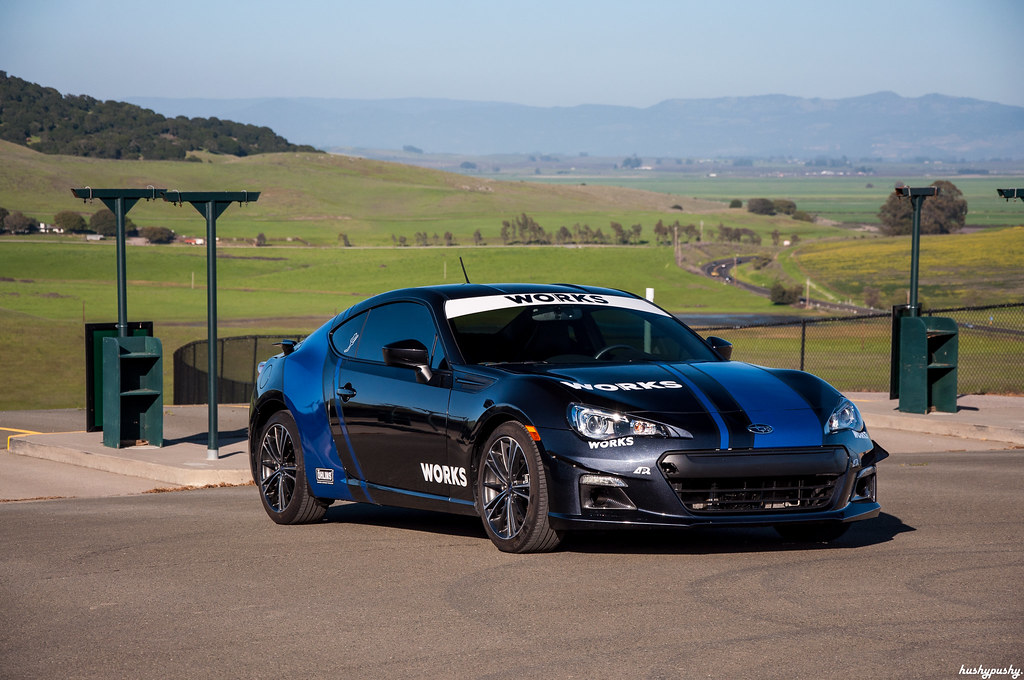 Despite the stock wheels, I still think this is an attractive car; I really dig their black-and-blue livery. 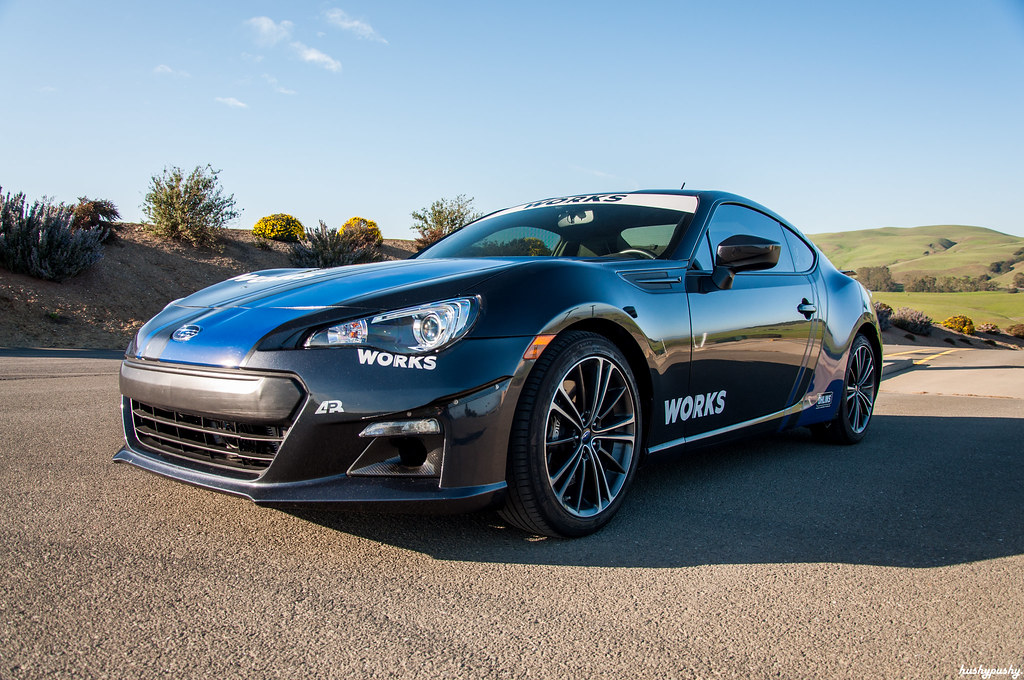 However, I look at my own FR-S everyday, so it’s all the small details and additions that really stand out. Check out the carbon fiber brake ducts and canards! 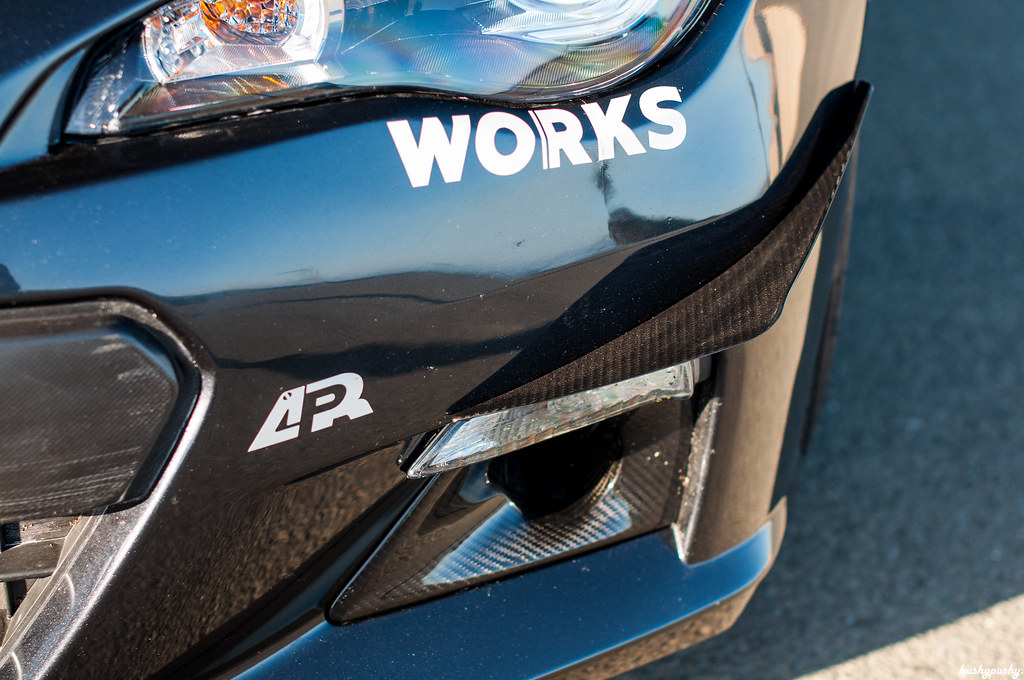 Apparently there’s another set of canards, but they weren’t on the car at the time. 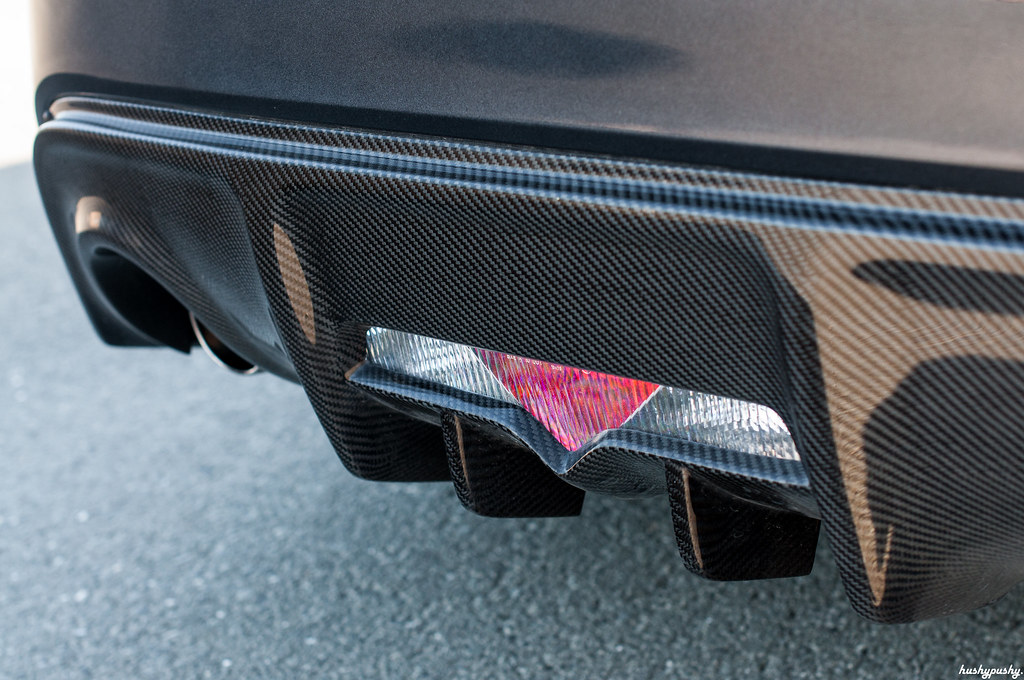 If you follow this site, you know I see tons of carbon fiber, and only the best weaves will do. The Seibon carbon fiber diffuser not only features more blades than the stock piece, the quality is absolutely top-notch: fitment is perfect and so is the weave. 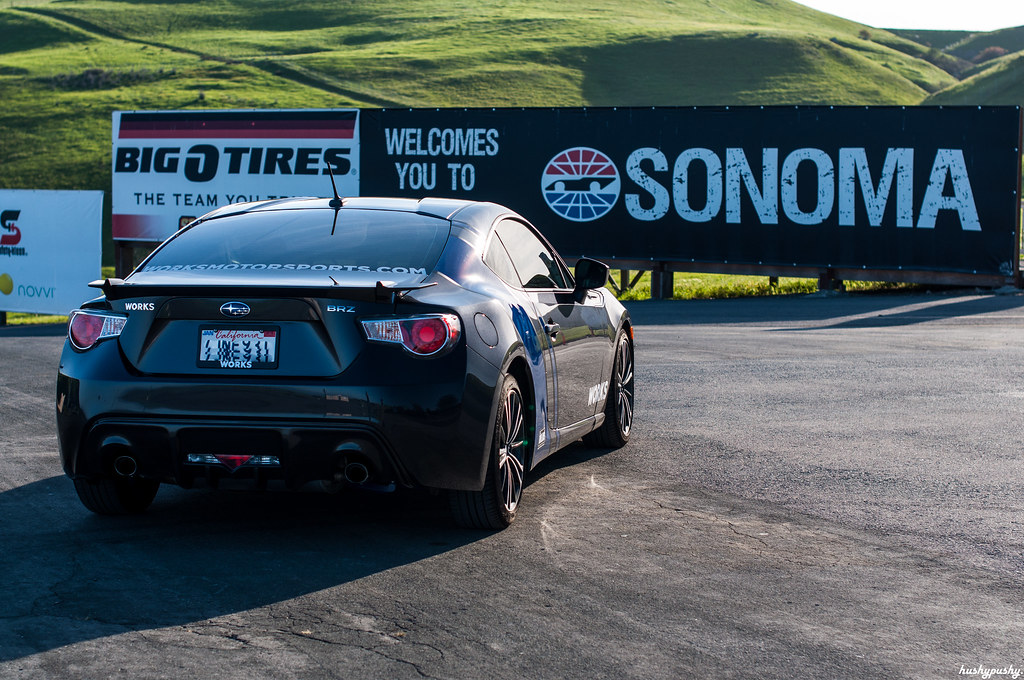 Man, don’t those stock tires look silly? This trend of slightly-stretched tires from the factory needs to go. And if that alignment is what looks silly to you, just remember “drift setup” and you’ll feel better about it. 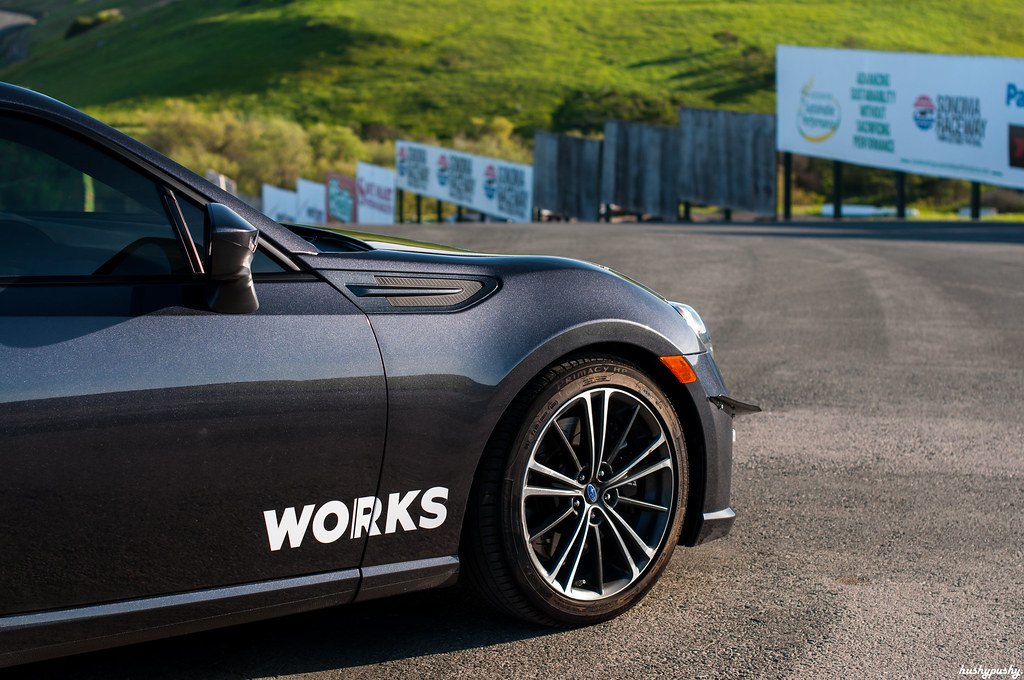 Being early or late isn’t necessarily bad; it’s that aspect combined with what should be happening that creates a problem. Well, in this case it was a double whammy of bad timing–not only did I arrive too early to shoot the car but I just waited to damn long to post all this. You should have read this over five weeks ago! Oh well.