Although I’m finally getting around to posting it now, the following events actually happened the day after the Jalopnik Film Festival, which I posted about a few weeks ago. 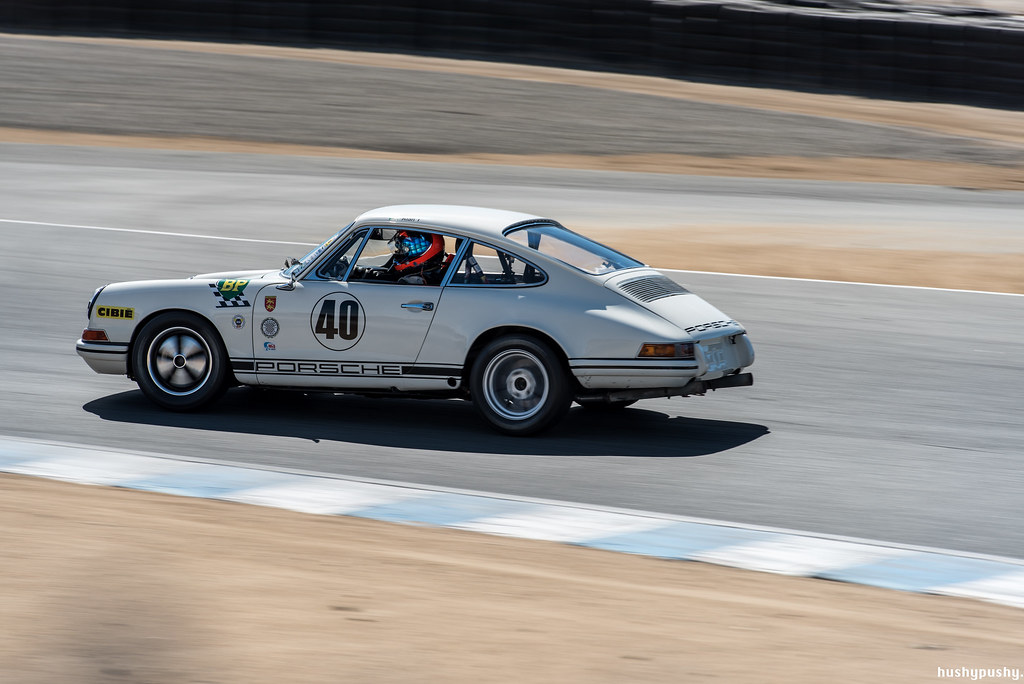 The event was Rennsport Reunion V, an epic gathering of Porsches and Porsche-philes being held at Mazda Raceway Laguna Seca. Unfortunately, Art and I were only able to stumble out of our hotel rooms in north Los Angeles at around 7 AM on Saturday morning, which meant this is where we pick up the action: in the early afternoon, near the end of the second-to-last race of the day. 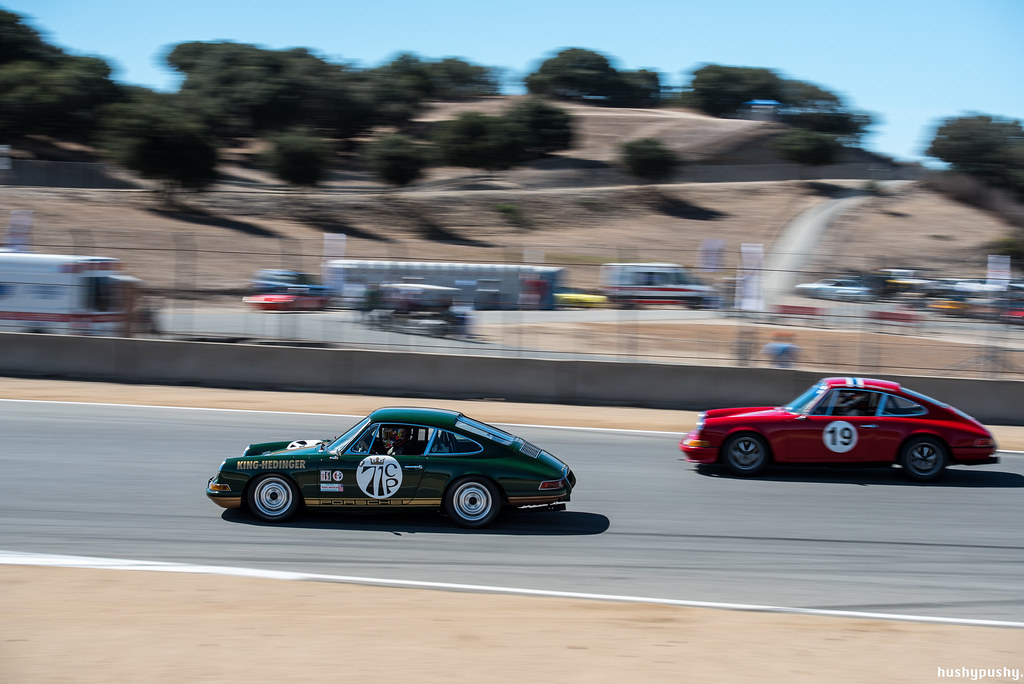 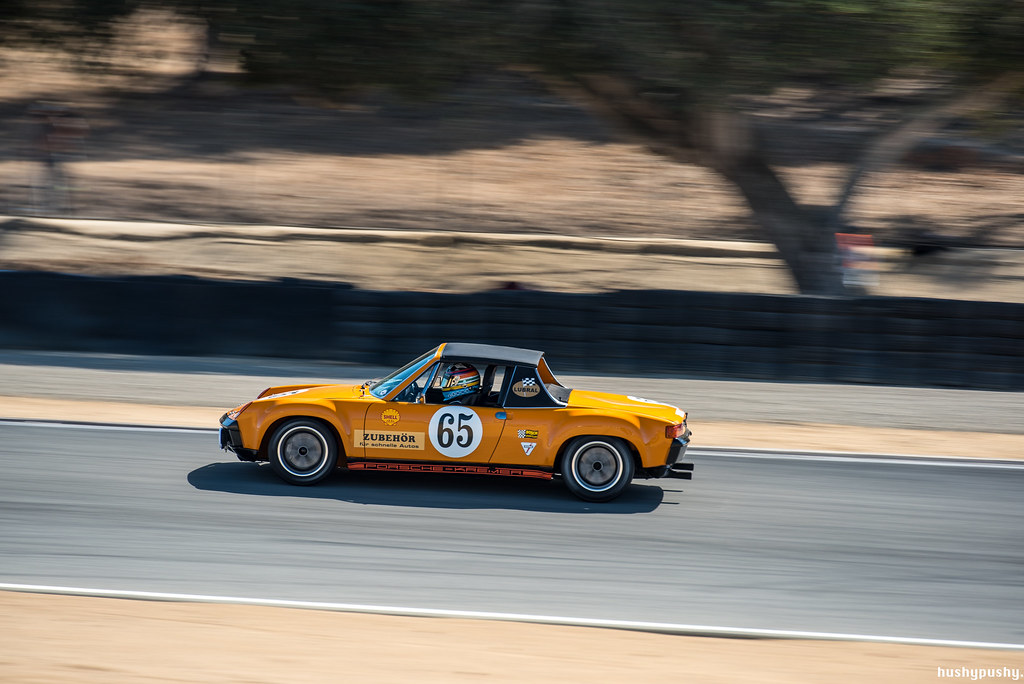 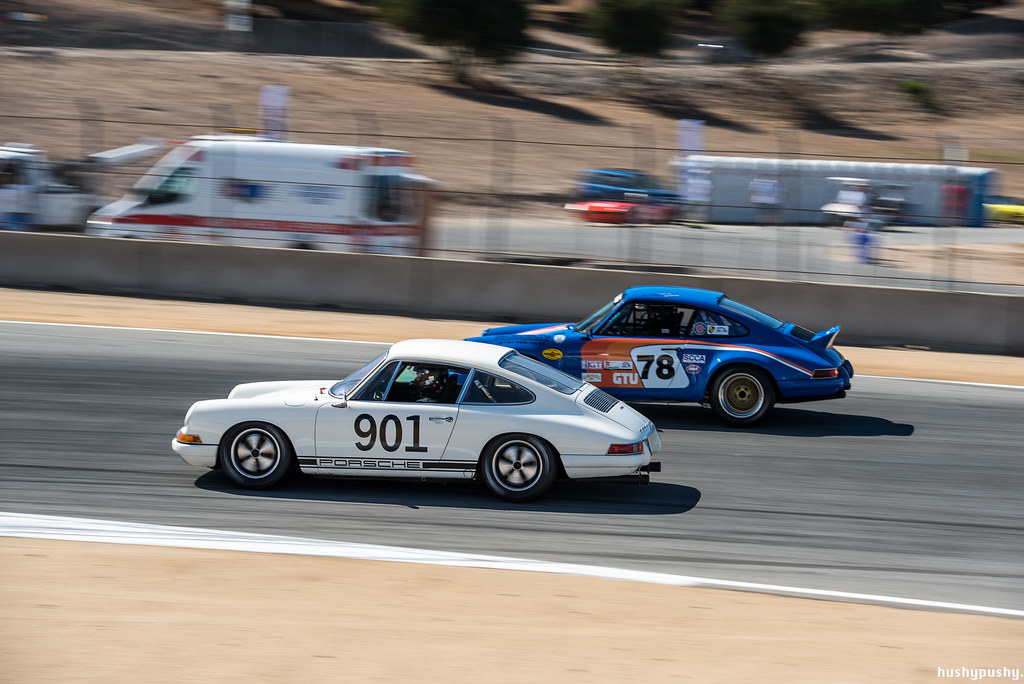 I love how these guys are really racing, and not just cruising around. 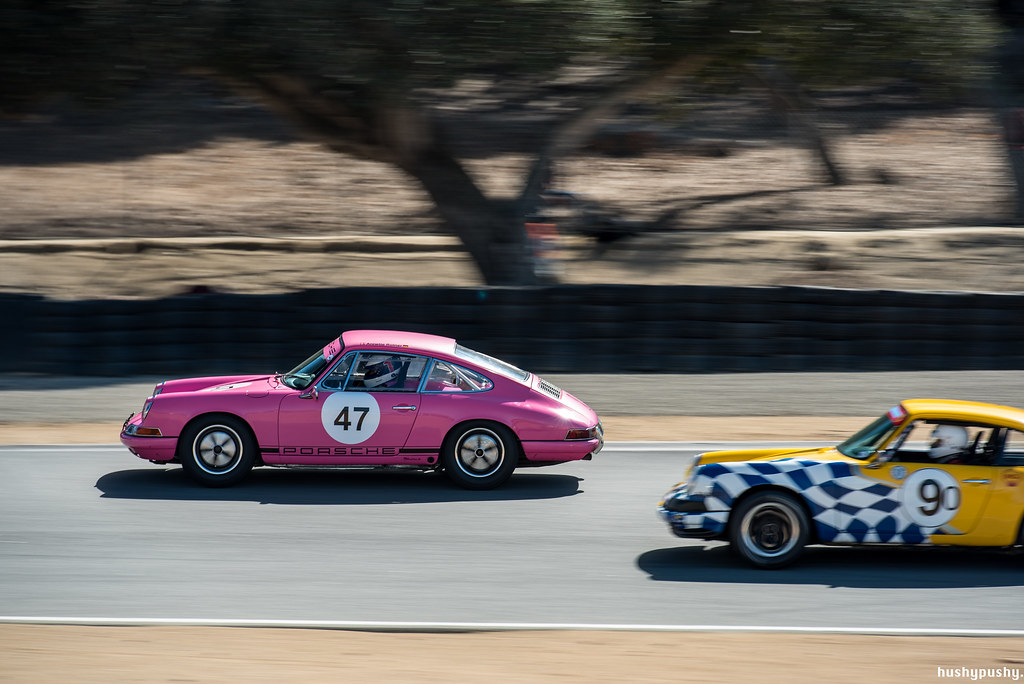 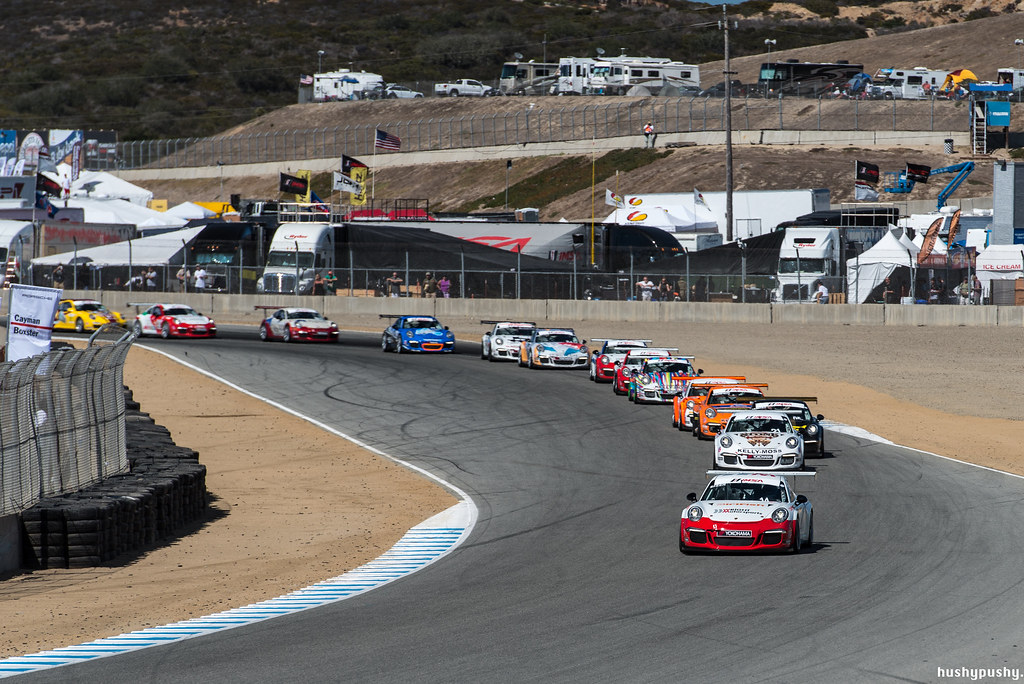 However, I was soon greeted with the reassuring sound of flat six thunder. Ahh, so nice to hear a modern race car that is naturally aspirated. 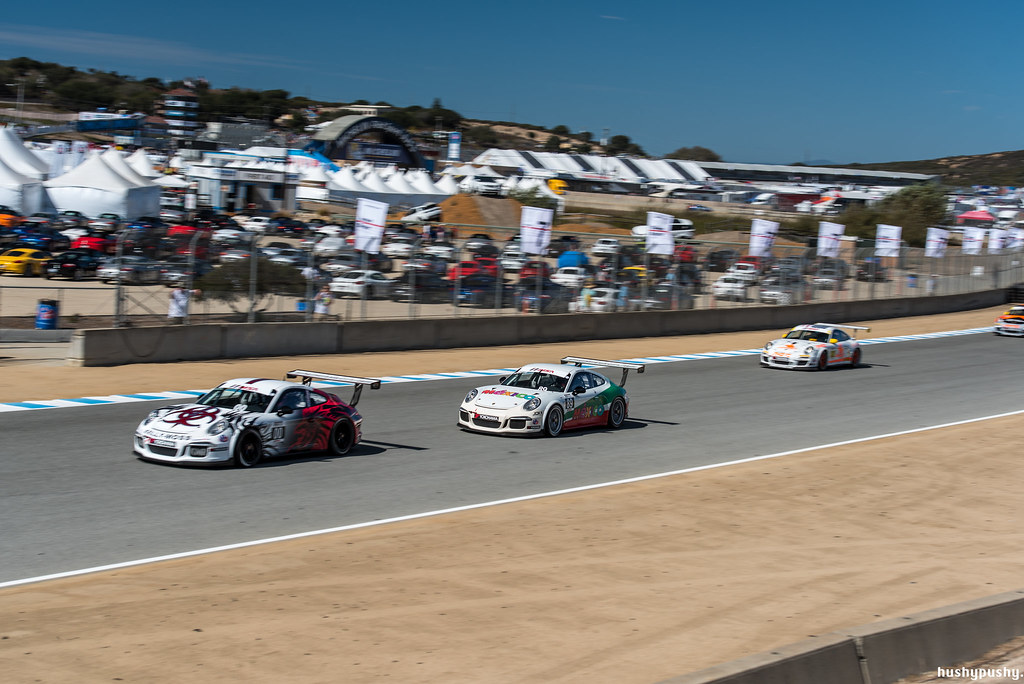 This was the Rennsport Reunion Cup, featuring modern GT3 Cup cars. I love how closely related they are to the road-going 911’s…pretty much as close as you’re going to get in this day and age. 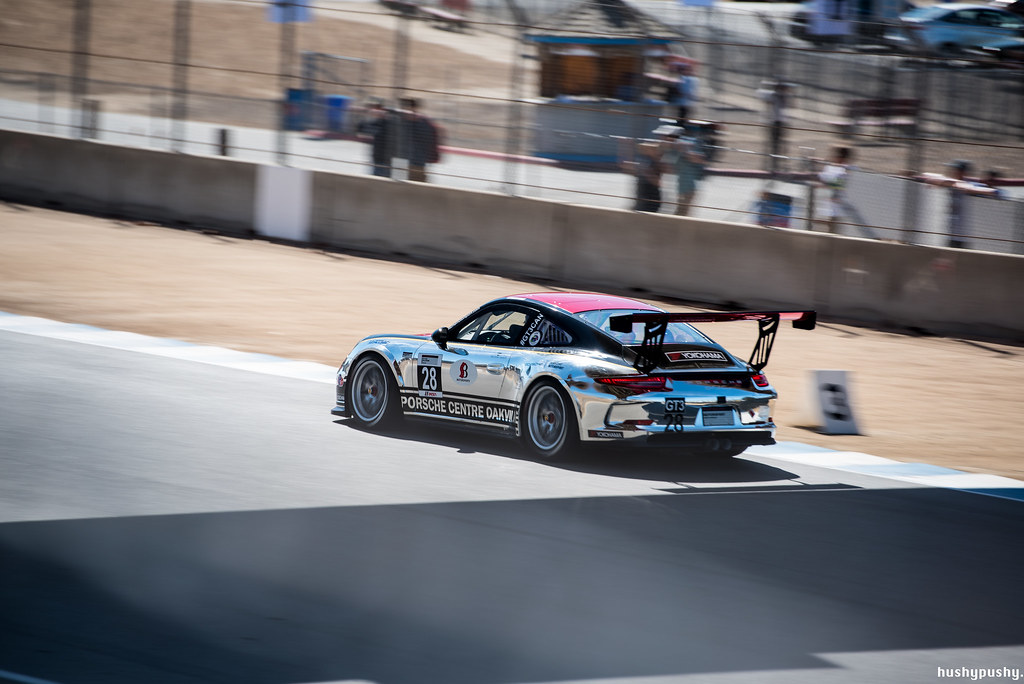 Ok, I admit that I love shiny liveries. It’s amazing that in this era of computer-aided design, where photography is more common than ever, that boring color schemes are commonplace on race cars. 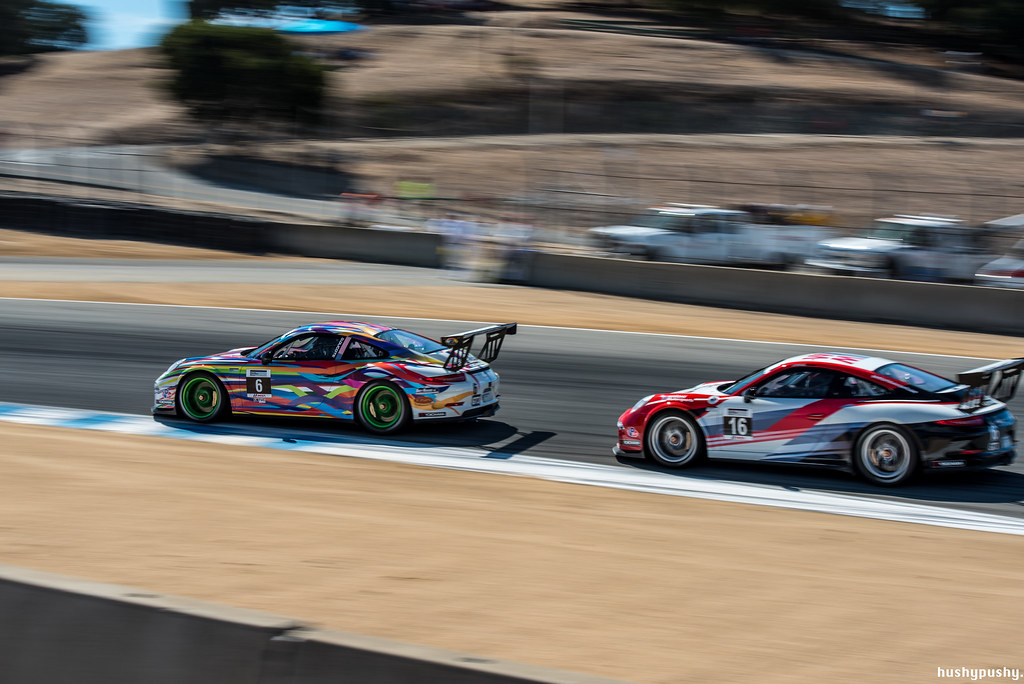 Well, you won’t see any of that here. This “art car” looking 991 was definitely my favorite. 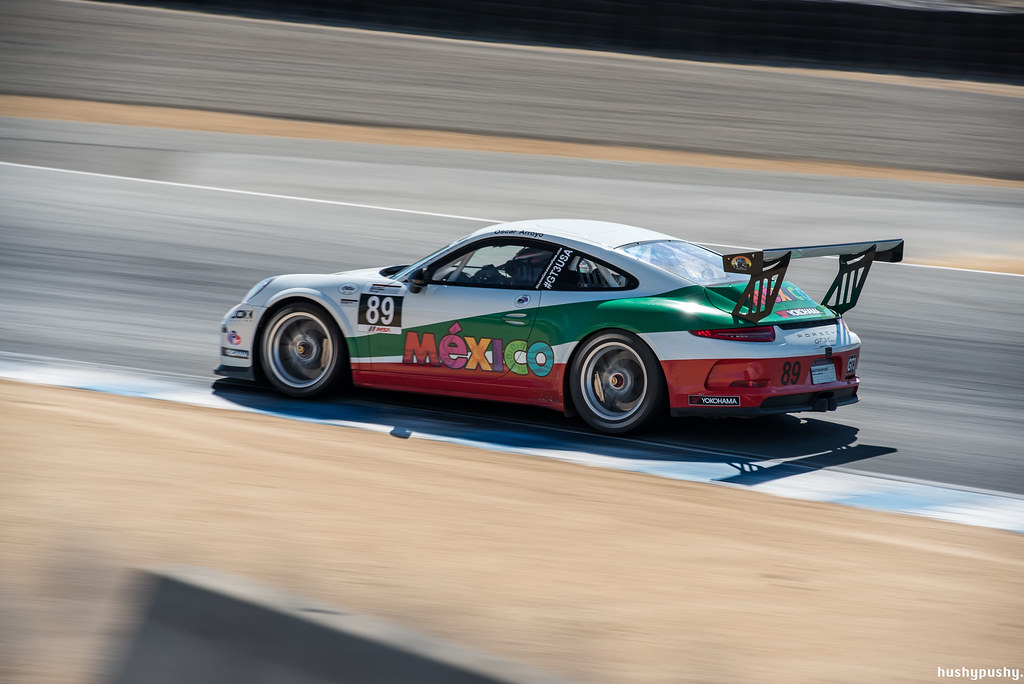 I also liked this livery, representing the entire country of Mexico. Nice bold color scheme, but they missed a chance for some classic Mexico Blue! 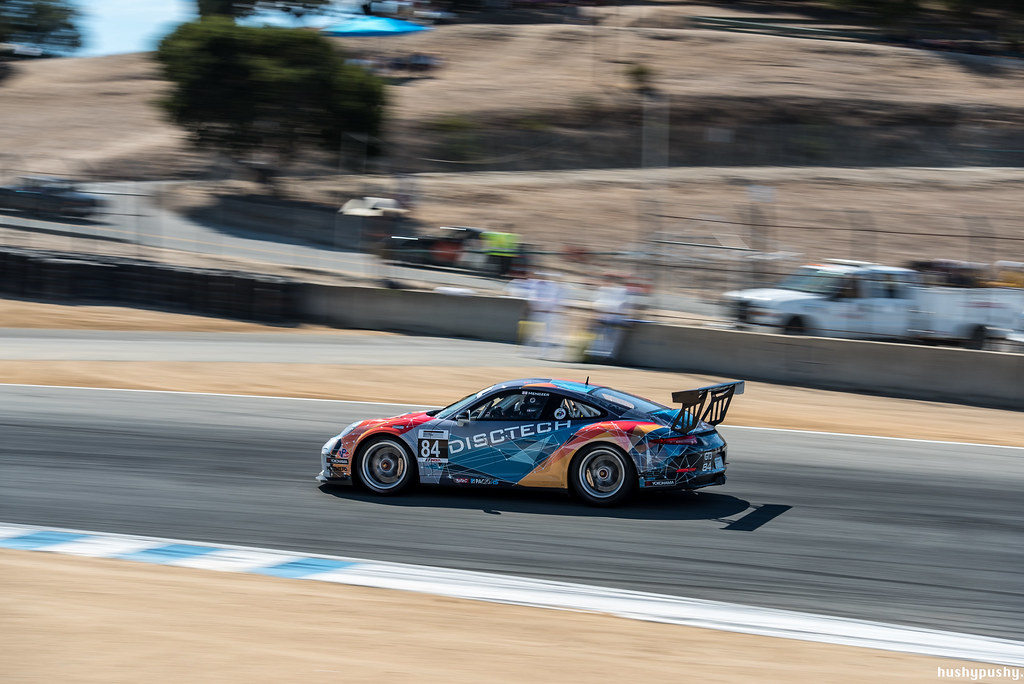 This Distech-sponsored car was also very appealing, both as a whole and in the fine details. 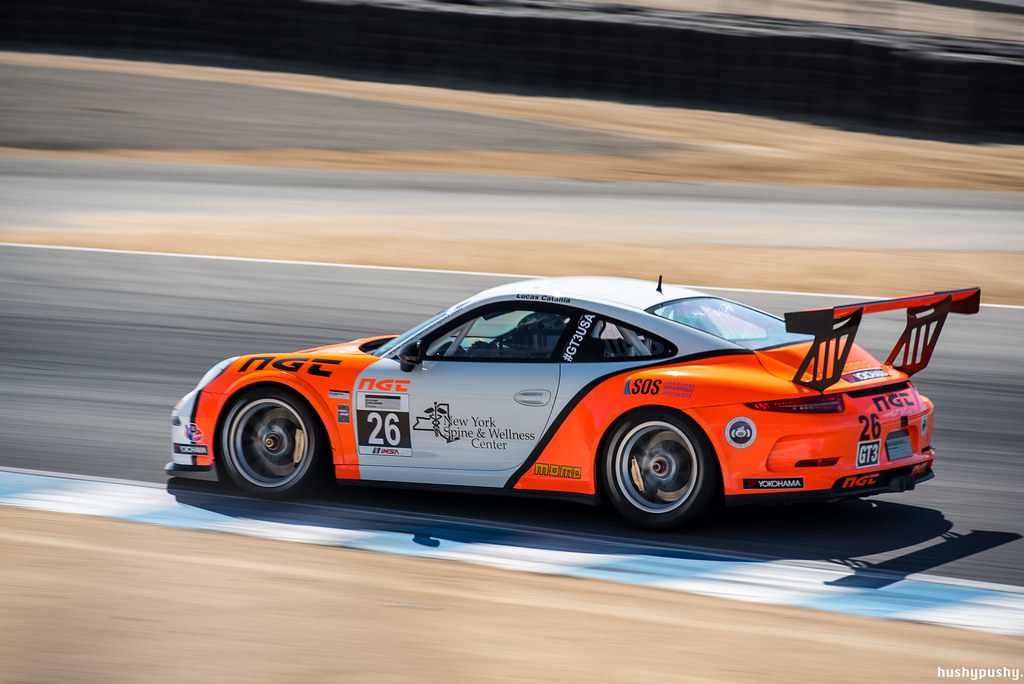 Anything with fluorescent paint is really hard to capture. How does this look on your monitor? 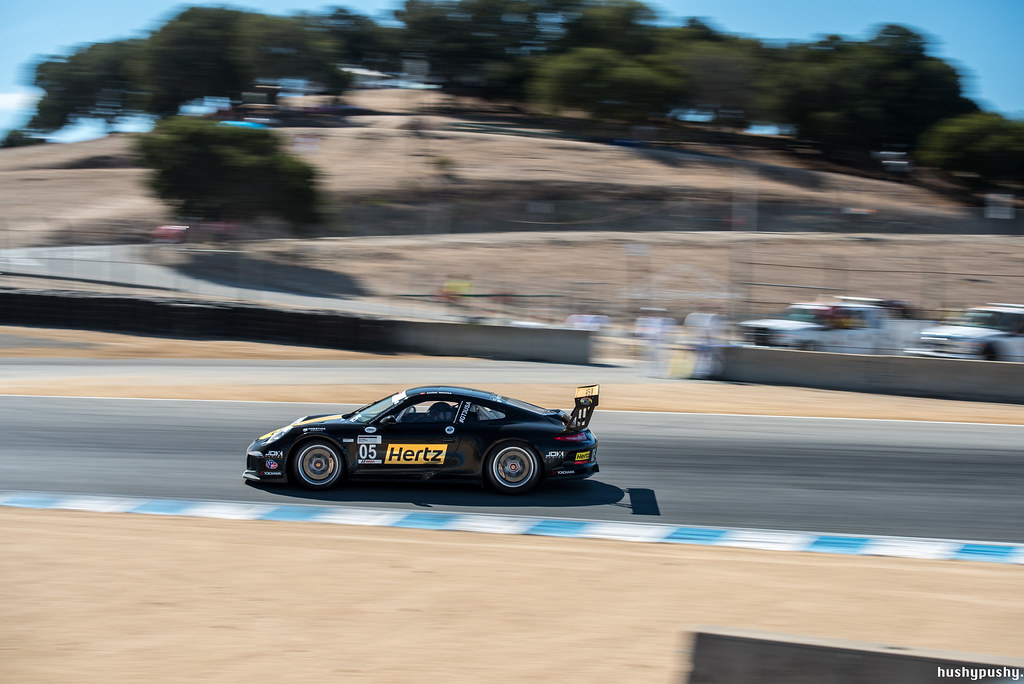 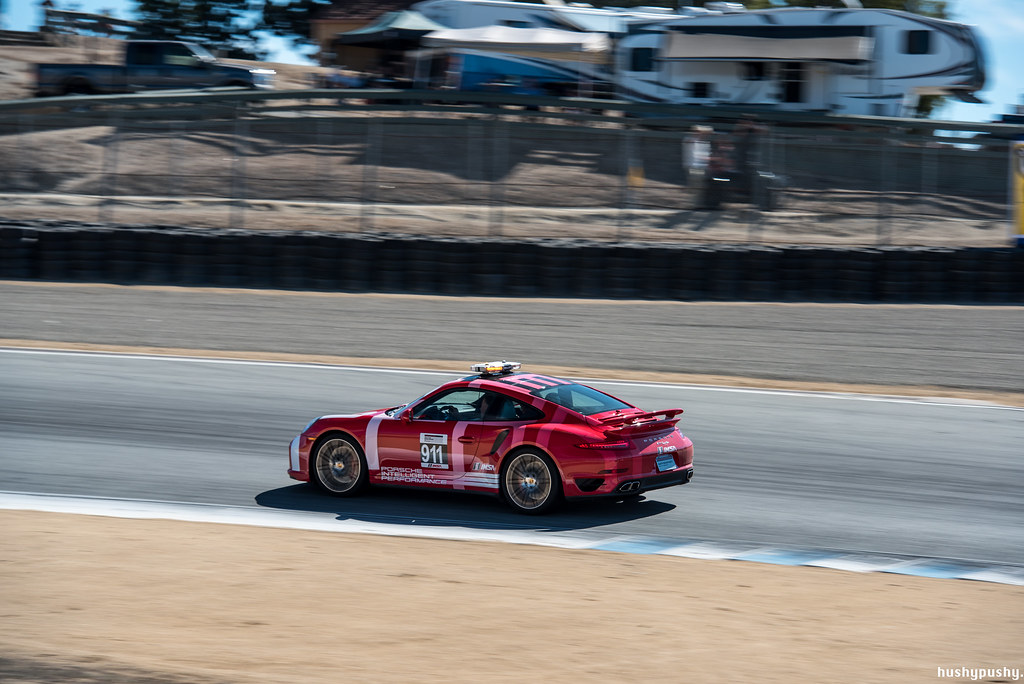 I don’t really know why, but I thought this Turbo pace car was super cool. 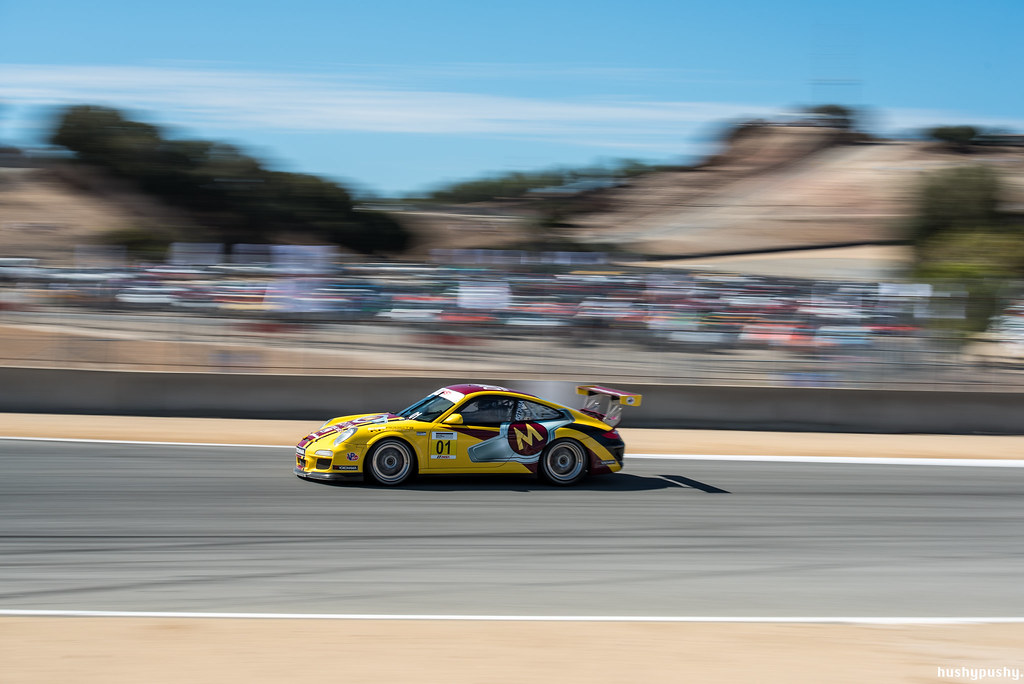 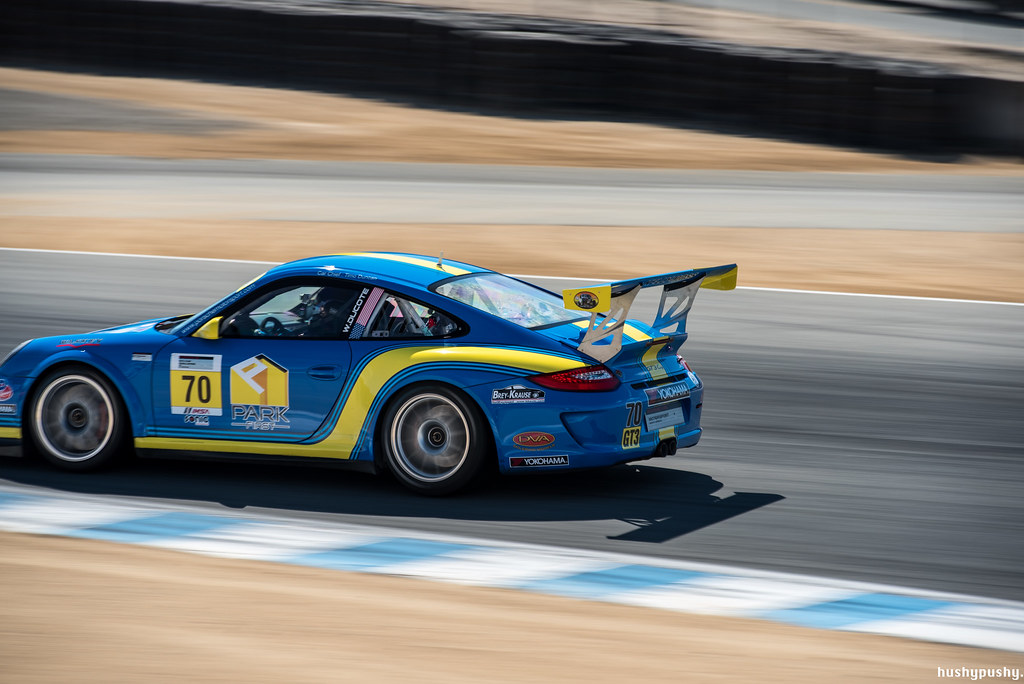 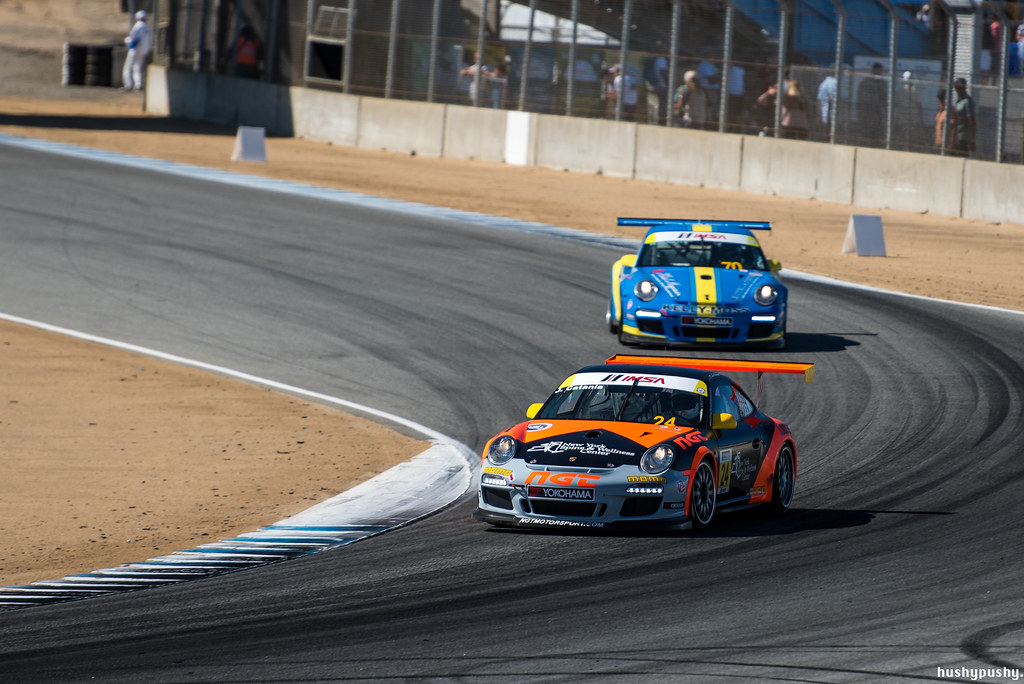 I still think the 997 is the best looking water-cooled 911—the 996 is too bulbous and the 991 lost a bit of the “rear-heavy” look when they pushed the rear wheels back. But the 997 hits the sweet spot for me. The reason I bring this up is that I love to watch and shoot vintage racing, and there’s a lot of the “good old days” and “the way things were” vibe going around. But you know what? I love to remind myself that there is some great racing going on right now. And one day, 20 or 30 years in the future, I’ll look back and say, “Ah yes, I remember watching 997’s race in period. Those were the good old days.” 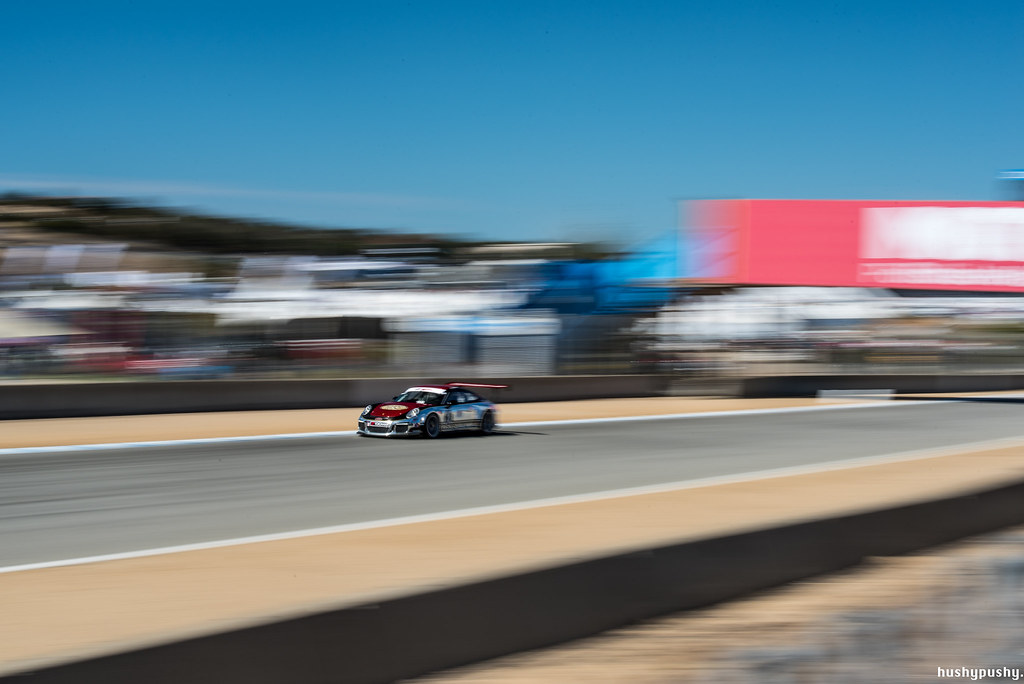 There’s not much more to say about the racing because I couldn’t really follow the action (not like I ever do anyway), so now I’ll just show off some shots I like. Down to 1/13 of a second with this exposure! Bright colors with high contrast shapes: that’s the recipe for a perfect livery from a photographer’s perspective. I’m 100% a slave to autofocus, so the more things my camera can focus on, the better. 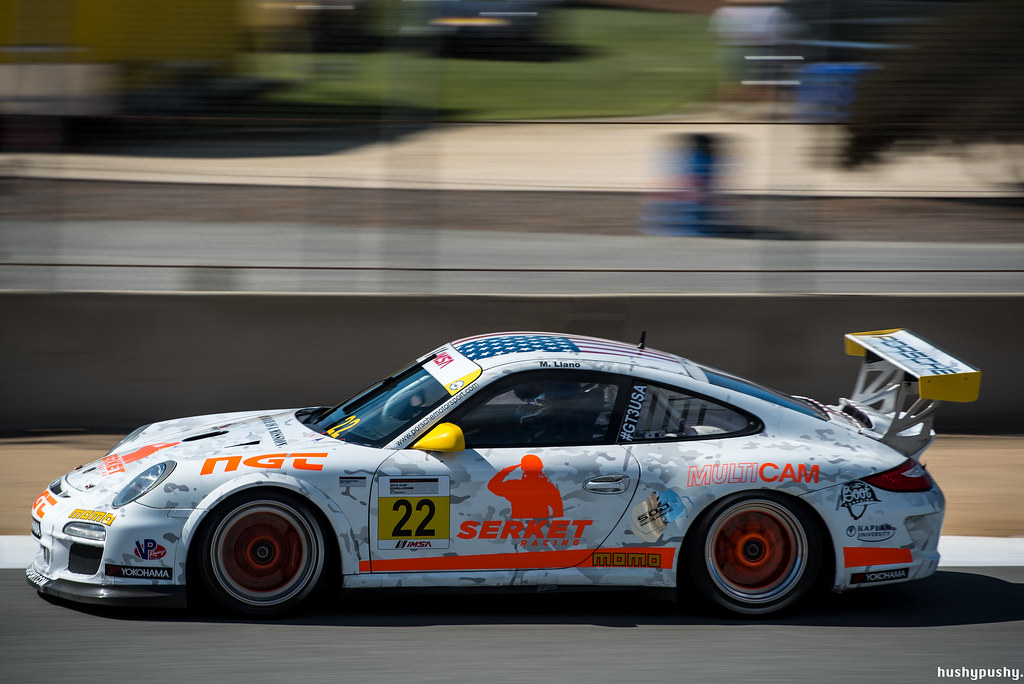 If you like pixel-peeping, click that photo and check out the full-resolution version. Sure, it’s pretty tight in the frame, but it’s completely uncropped! I’m kind of proud of that for some reason. And it kinda blows my mind a little bit that I got nice motion blur at 1/200 of a second—I’m so used to shooting ChampTruck at 1/80 and the wheels are barely spinning. 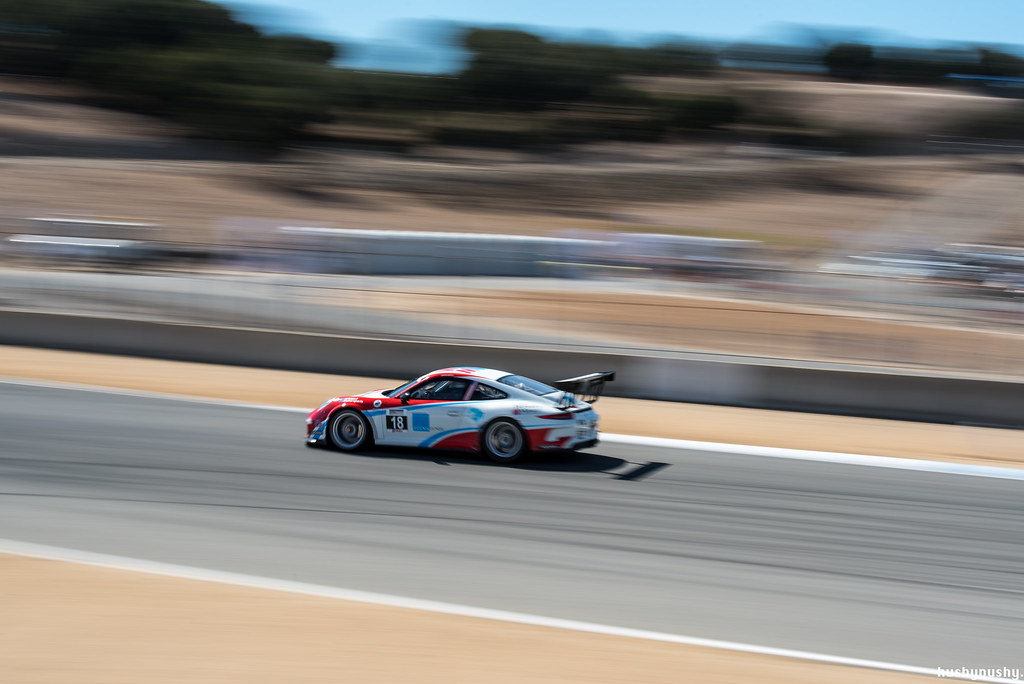 From that to 1/20. Maybe you’ve already noticed, but I love buttery-smooth pans; freeze frames just don’t get my blood flowing. 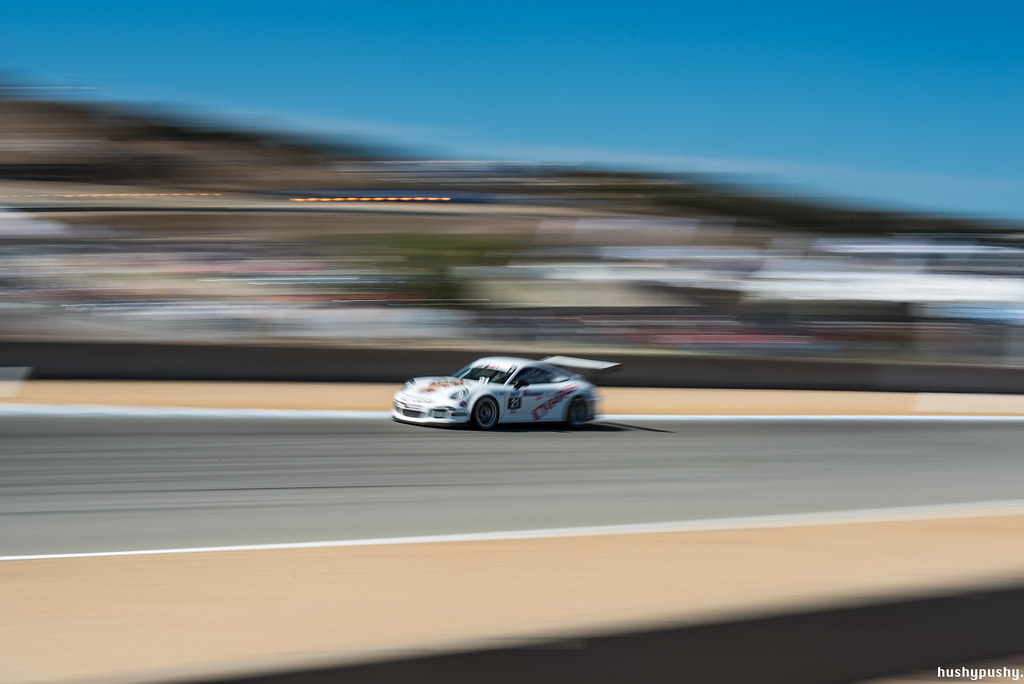 One of the media outlets to which I send ChampTruck photos seems to have the complete opposite opinion; I used to throw in a couple slow pans in each batch of event photos I sent over, but then I noticed: their editor never posted any of them! I guess where I see a painting, some people might just see a blurry mess. 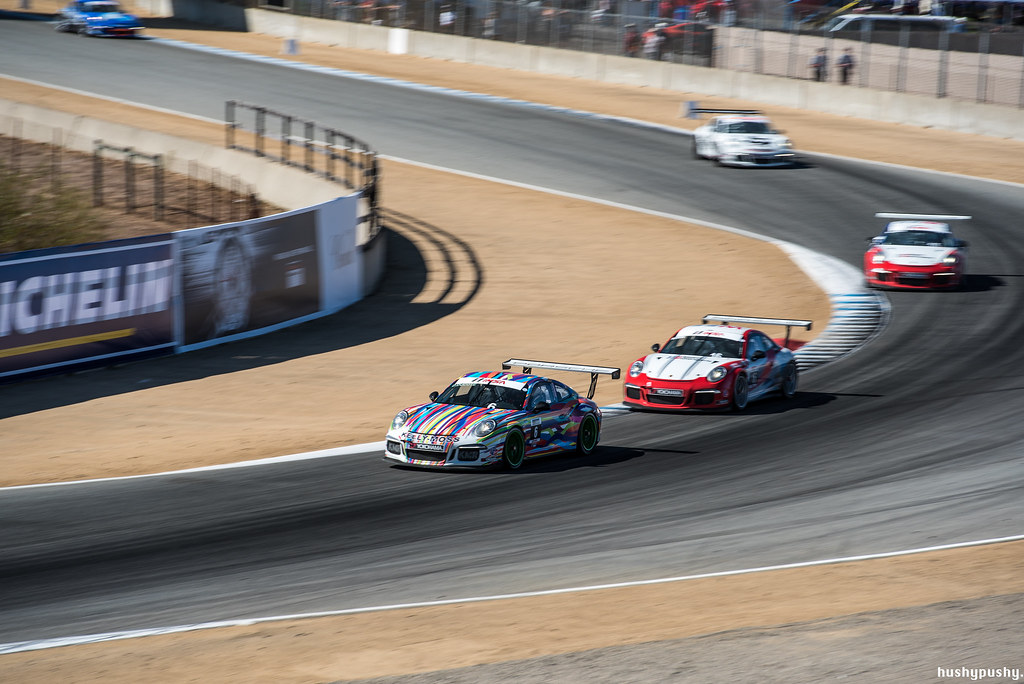 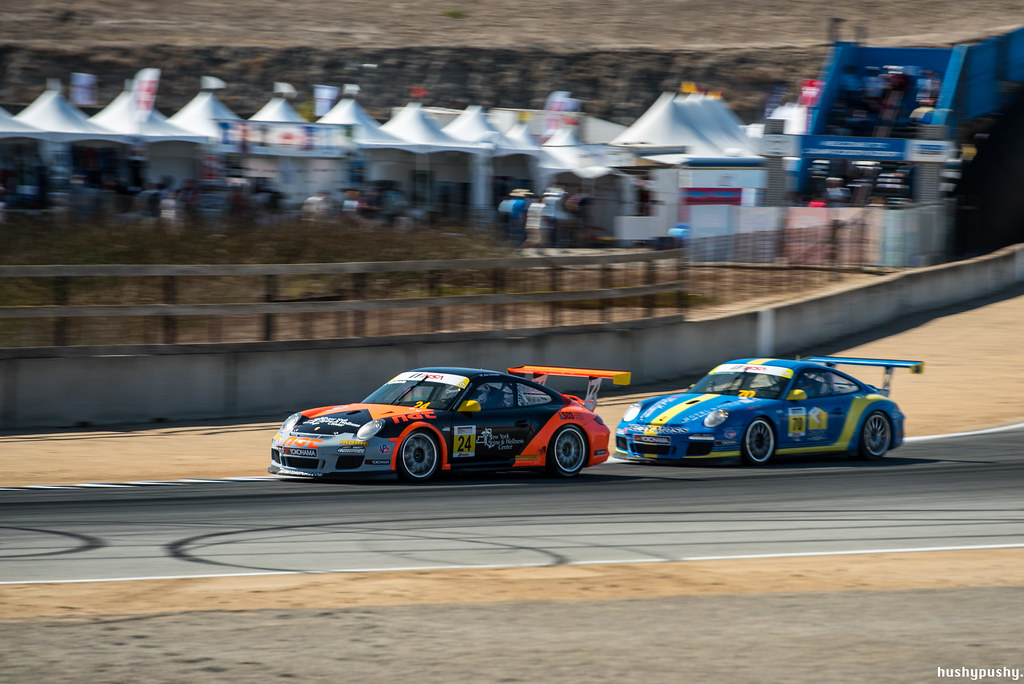 Actually, Kelly-Moss Motorsports had a few cars out there, like the blue 997 I’ve shown already. 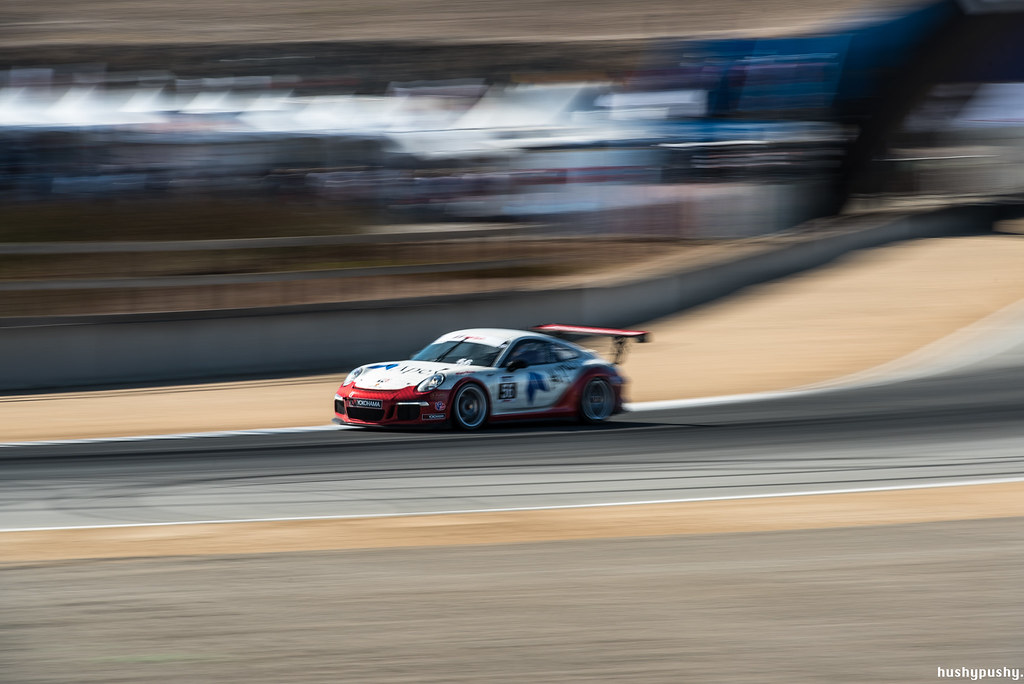 Another slow one. This shot reminds me of Dino Dalle Carbonare…he has a lot of motorsport pans with a tack sharp front and the back just exploding out of focus. 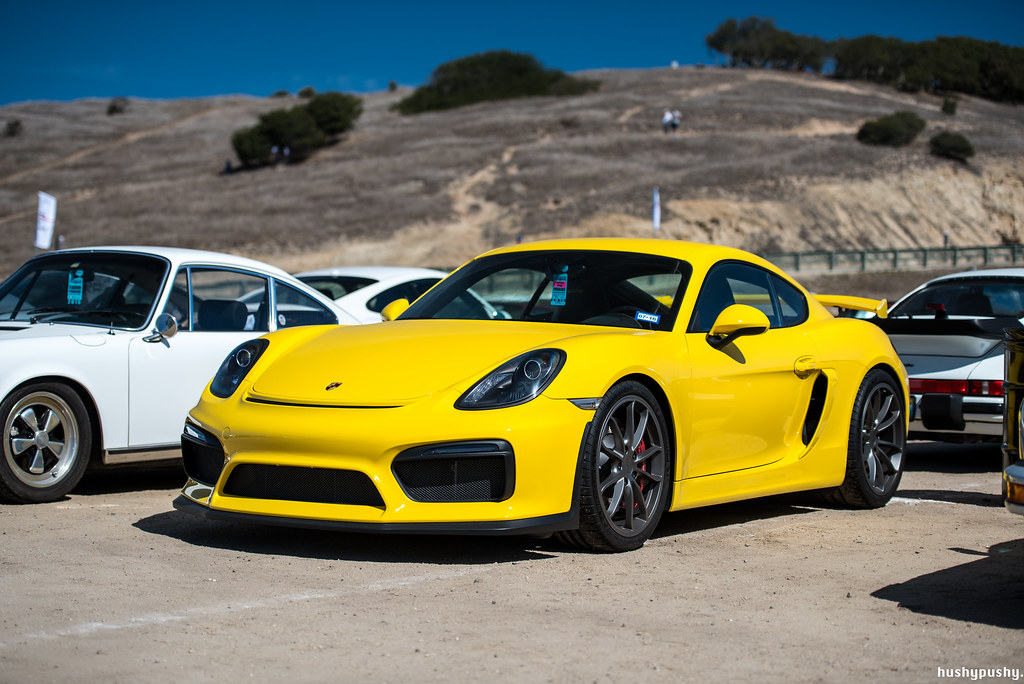 Unfortunately, while the track would be open for several more hours, the only “action” would be in the form of parade laps. So at that point I retired to the paddock to check out the static displays. This particular GT4, one of many I saw over the weekend in various colors, was in the spectator parking, which of course can be just as fun as the show itself. But there’s no time for that, so I headed down to the paddock.

Next up: the Pit Lane Concours and as much of the pits, paddock, and special displays as I could capture!