These days, most dealerships are large venues where multiple brands are combined under one roof. This strategy helps drive traffic to the store and also increases the bottom line as the more profitable and popular cars can balance out niche vehicles. Normally, the mixture of brands is either the same company (like Toyota/Scion or Ford/Lincoln/Mercury); other times they’re just similar (like Bentley, Lamborghini, Lotus, and Pagani). But at the corner of El Camino Real and Arastradero Road in Palo Alto, there’s a dealership with a contrast between brands that’s quite stark: Volvo and McLaren. 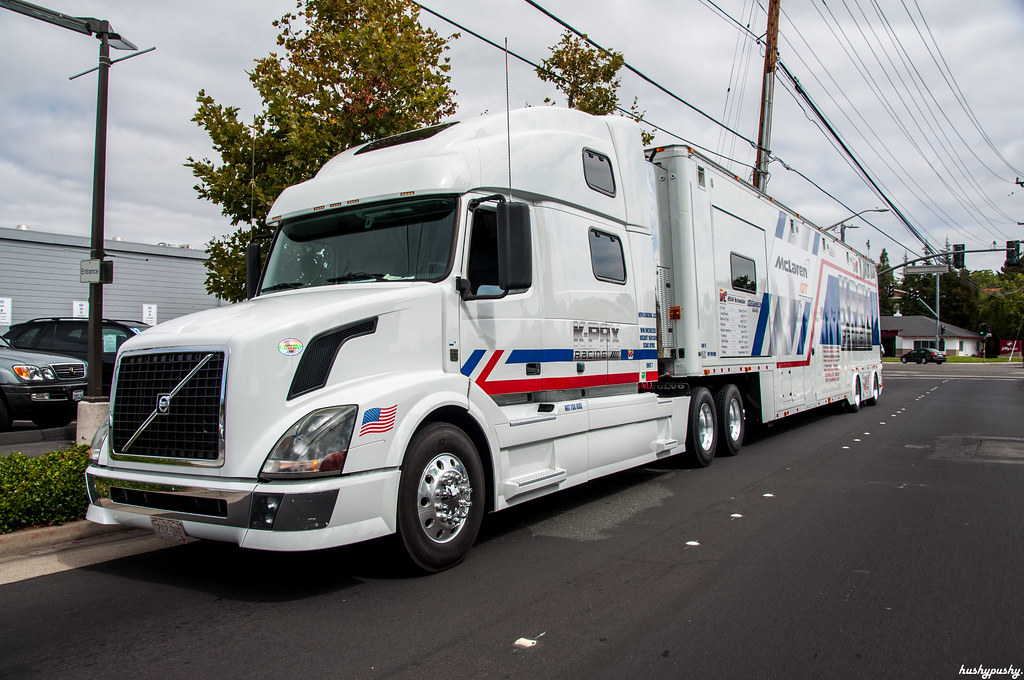 That’s what makes this interesting racing team even more interesting. Although K-PAX Racing had absolutely nothing to do with the Price-Simms acquisition of a Volvo franchise, it still rings of coincidence. K-PAX Racing successfully campaigned Volvos in North America for several years, when Volvo didn’t even provide full factory support–in the absence of bodies-in-white, K-PAX was stripping down production cars! With a shift in the focus of the Pirelli World Challenge to more supercar-based racing, K-PAX made the logical choice and decided to go with McLaren’s MP4-12C GT3, which comes from McLaren completely ready-to-race. A Volvo/McLaren dealership and a team that’s taken Volvo and McLaren racing to the highest levels yet seen in North America? Sounds like a match made in heaven! 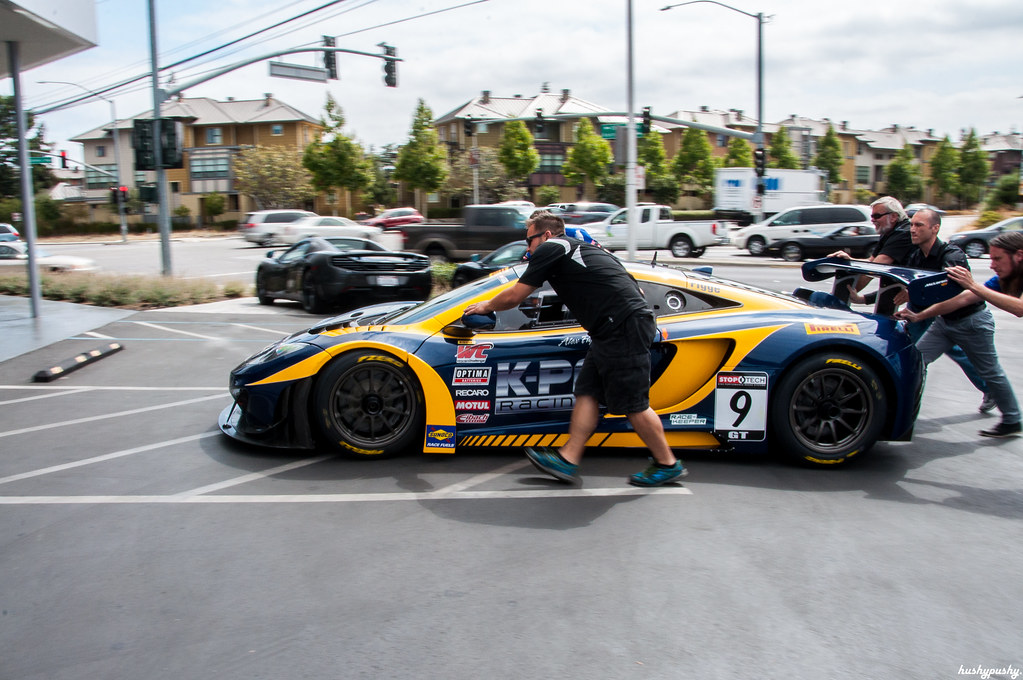 It’s not what you know, it’s who you know. With that old adage proving true, I watched as the race team unloaded one of their race cars into the showroom to be displayed for a few days before the “Cadillac Grand Prix of Sonoma”. 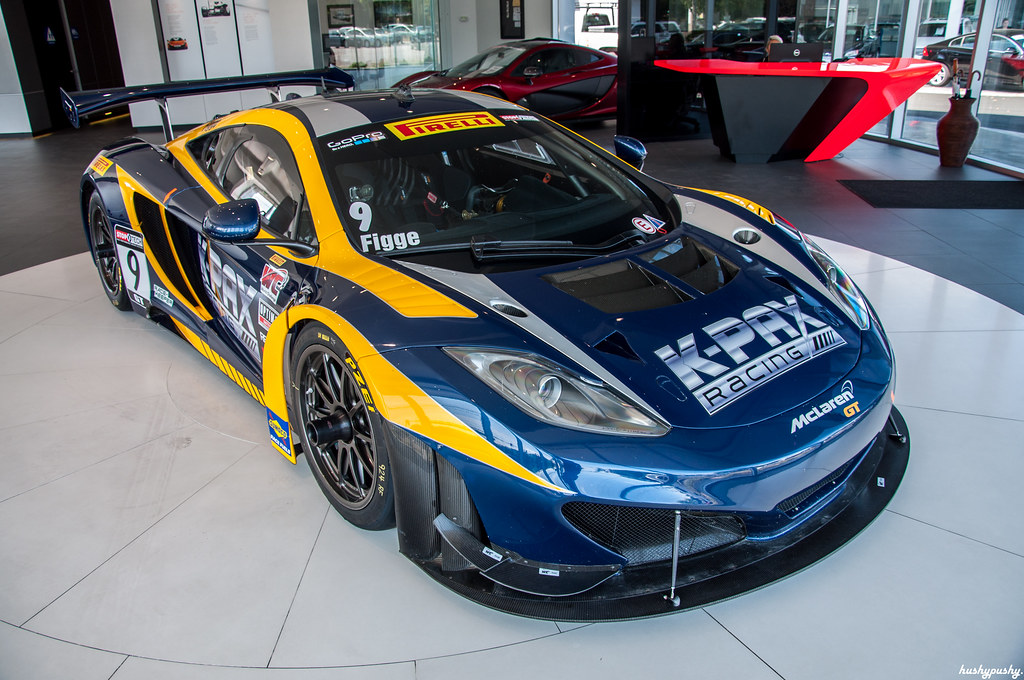 Yes, that’s a P1 in the background. Not for sale, natch. 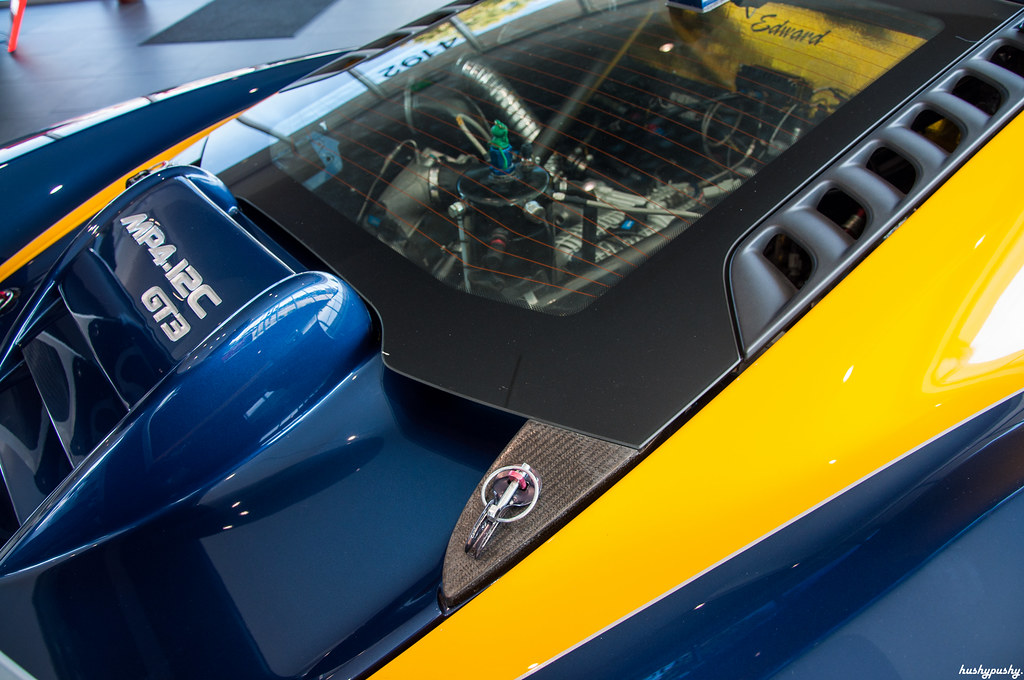 Since I spend most days poring over McLaren details, it’s always interesting to see the different variations. Hey, what’s that under the glass? 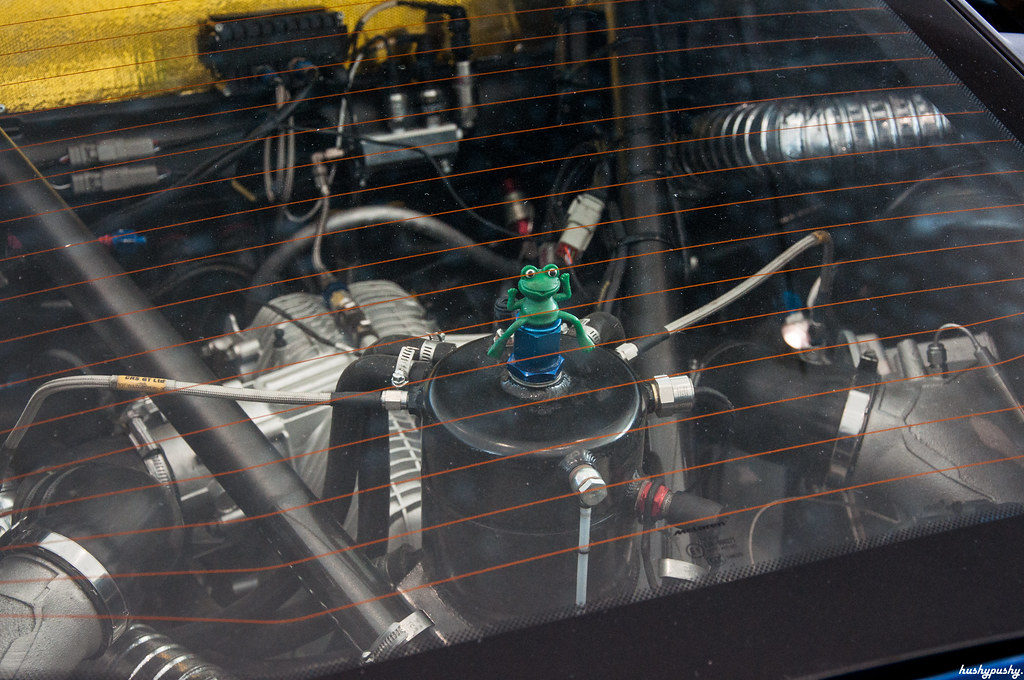 Oh! I wonder what that little guy is doing there. 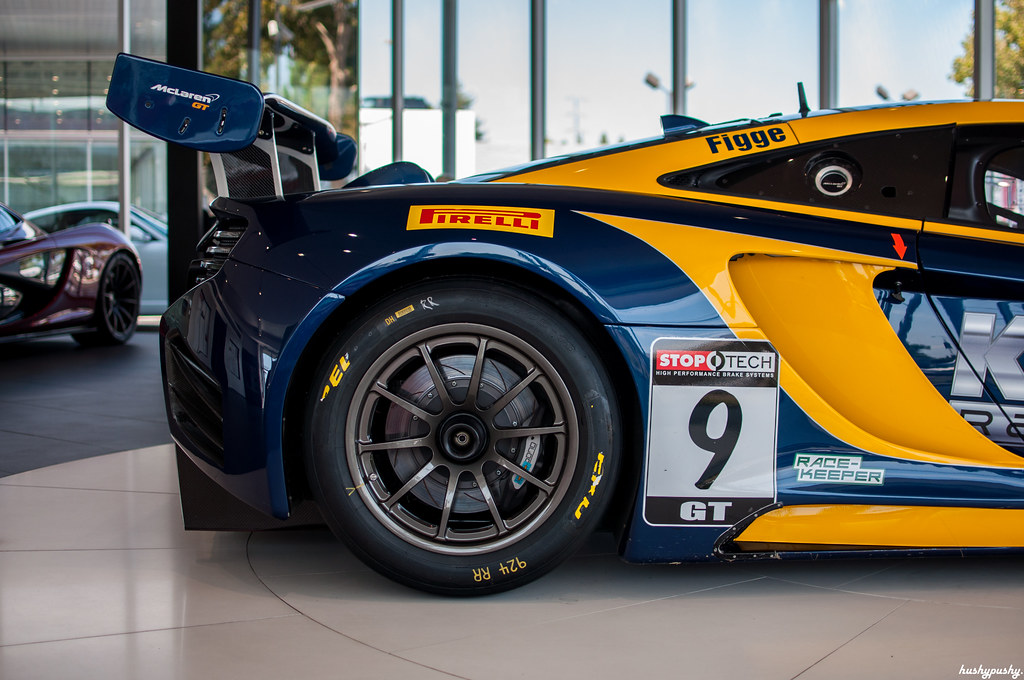 Lots of wheel gap out back… 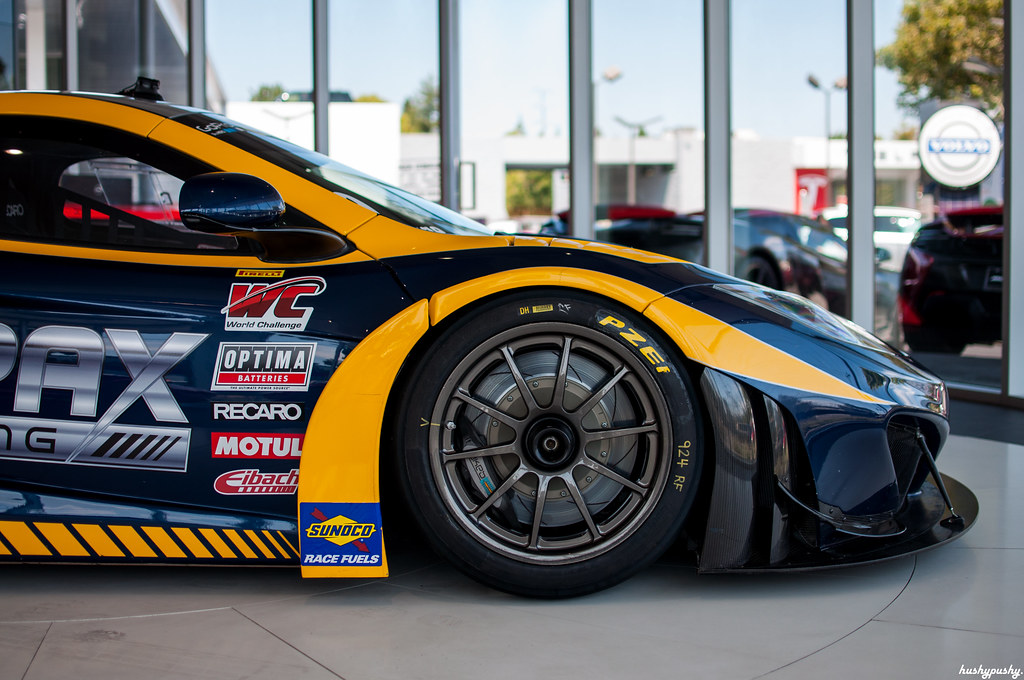 ..and slammed up front. Oversteer balance? 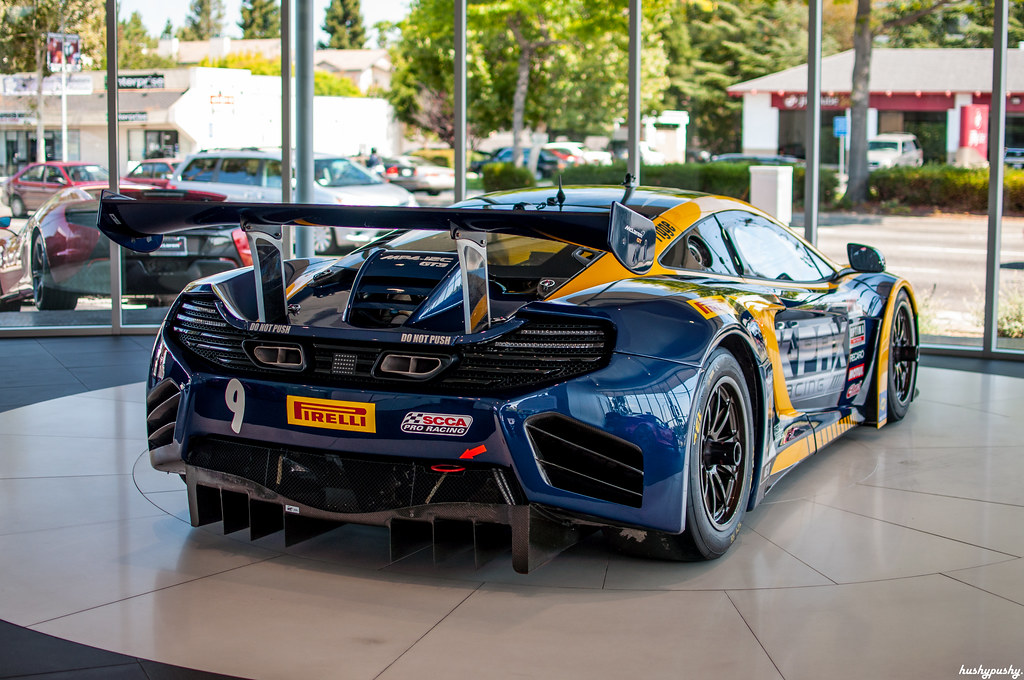 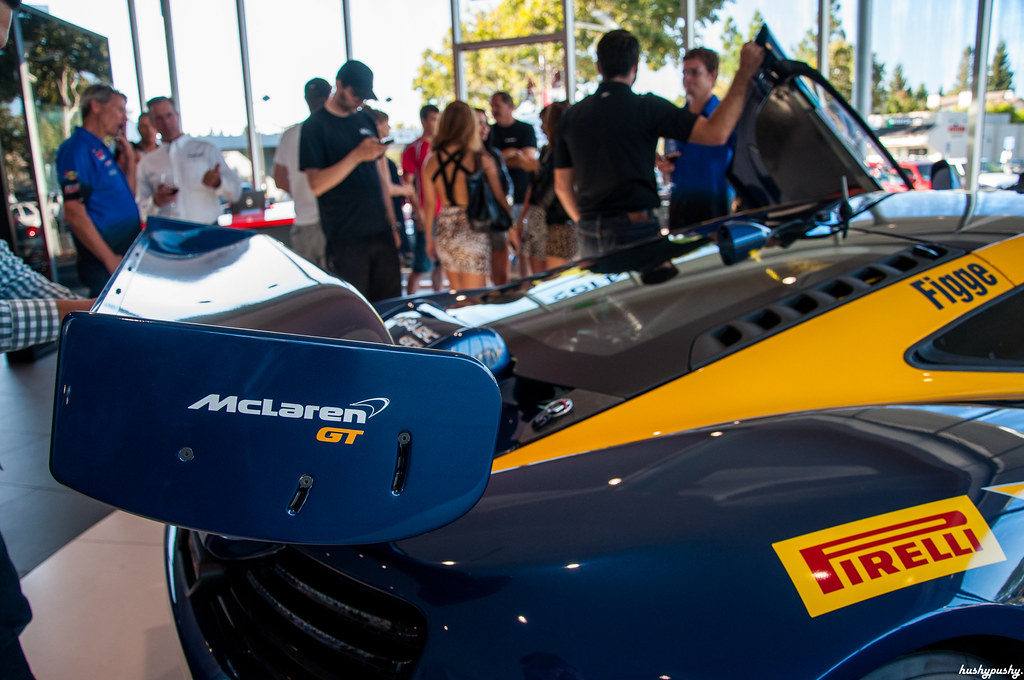 There was even a little party where local fans could meet the drivers and see the race car up close. In bokeh, you can see the drivers; Alex Figge in black holding onto the door, chatting with Robert Thorne in blue. 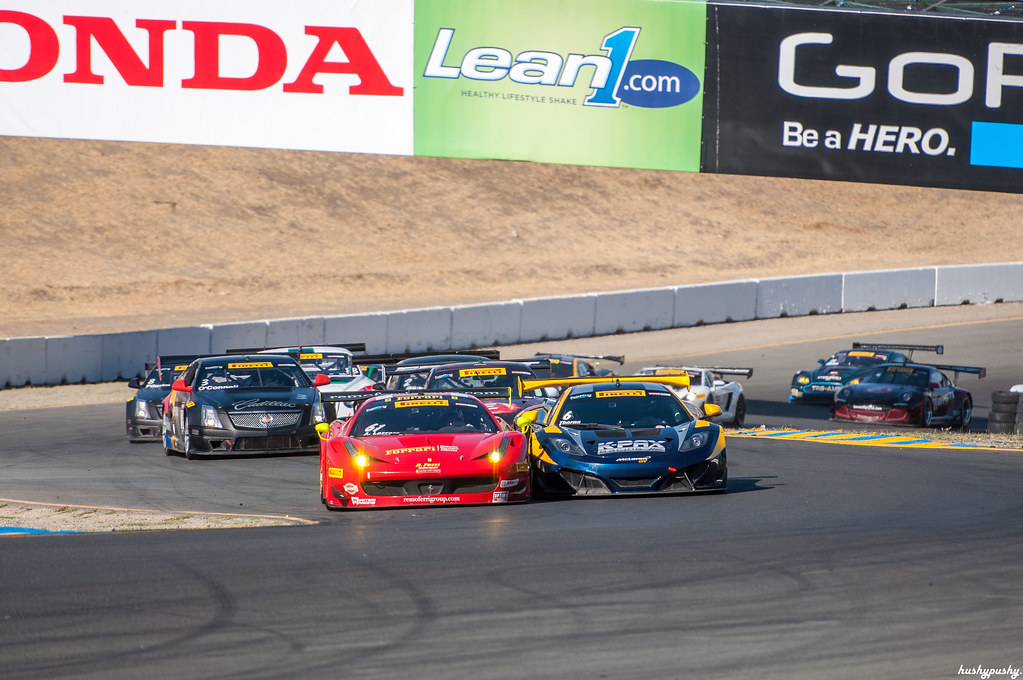 But enough of that. Fast-forward to the race track! This is actually the start of Race 2, where the 458 and 12C battled inches from each other, almost removing each others’ wing mirrors in the process. 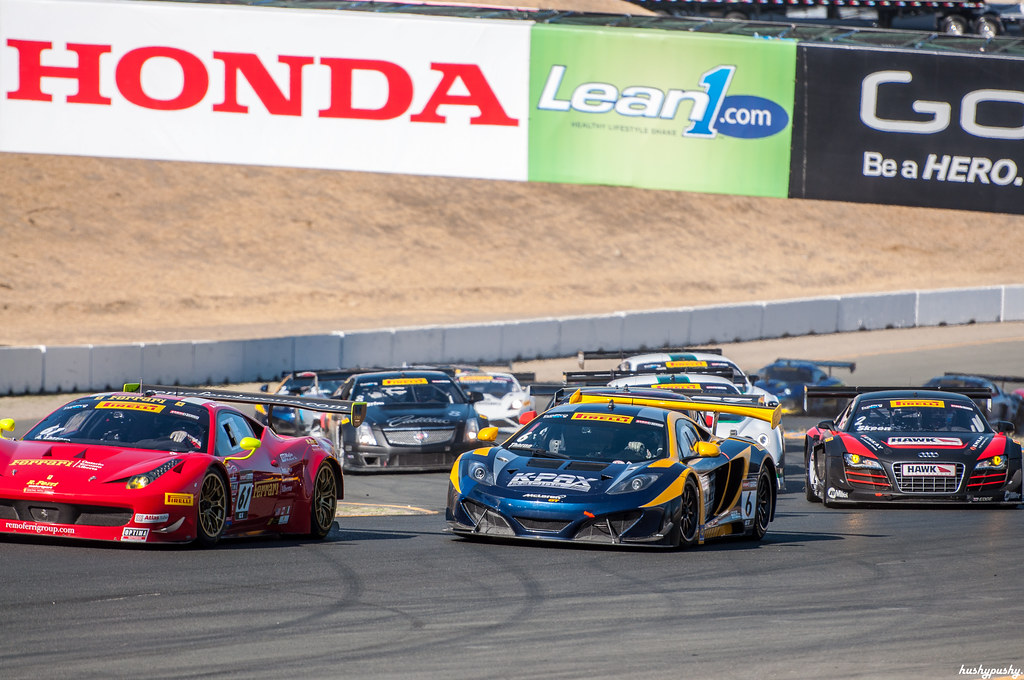 However, as is usually the case on the first lap, discretion proved the better part of valor, and Thorne yielded to the Ferrari. His prudence paid off; he ended up on the podium for this race. 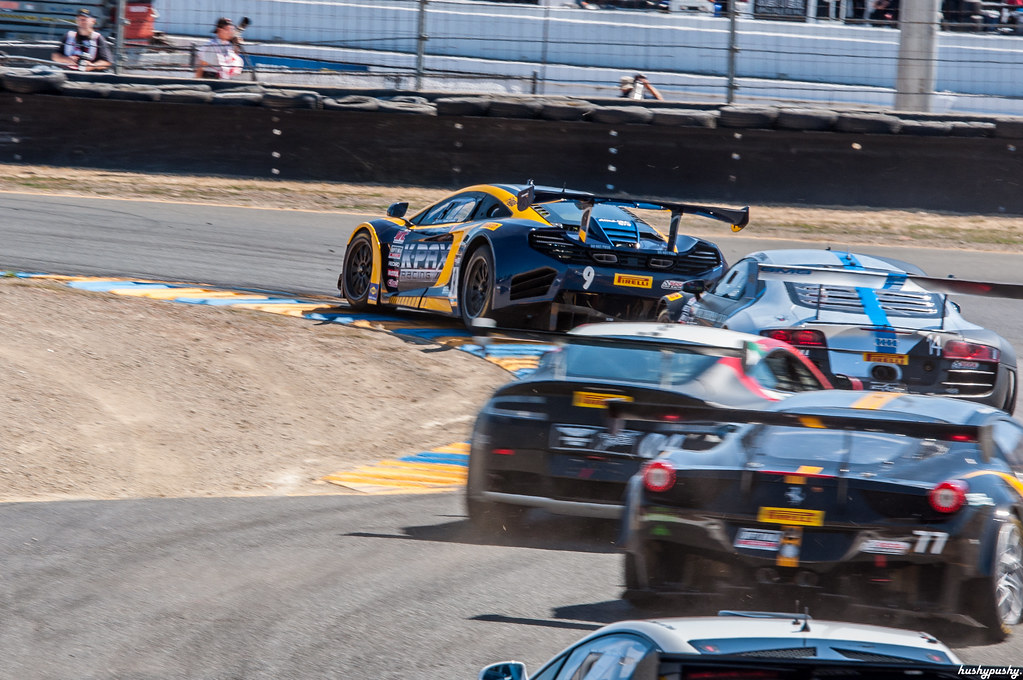 Yep, that’s one of the great things about Pirelli World Challenge: it’s basically a supercar battle. 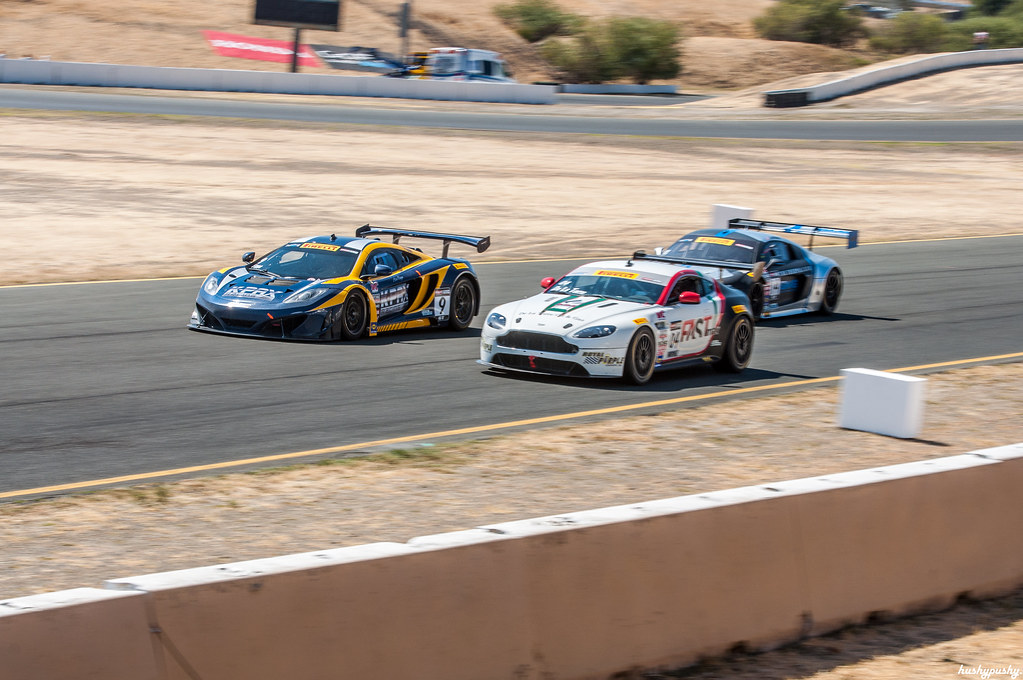 Some people bemoan the changes made in recent years, but I think they’ve had an awesome result. The racing hasn’t gotten any less exciting and the top class of cars is now purely exotic. 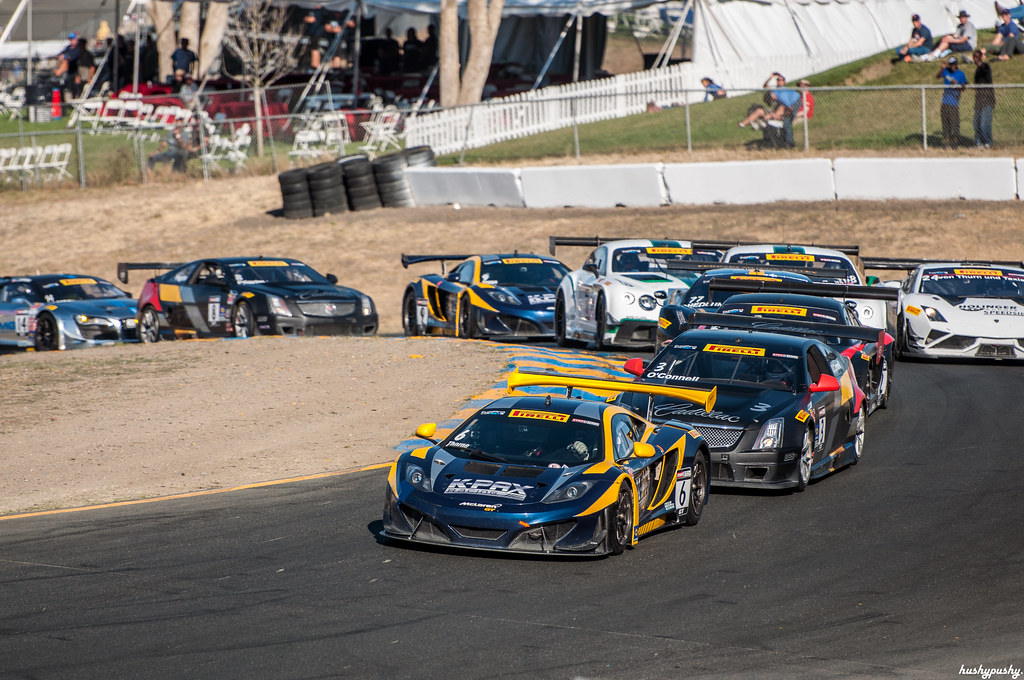 Another restart, and I see McLaren, Cadillac, Bentley, Lamborghini, Ferrari, and Audi battling together. And that doesn’t even include the Corvette, Aston Martins, and 911 that also compete. 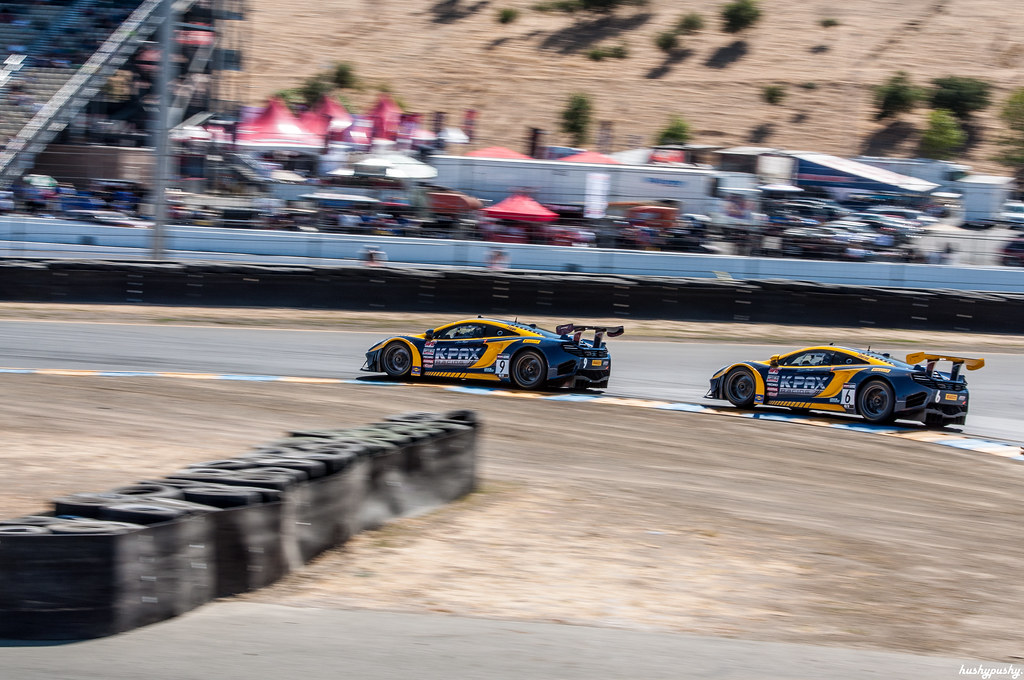 I didn’t see the guys running nose-to-tail very often, but I made sure to snap it when I did. 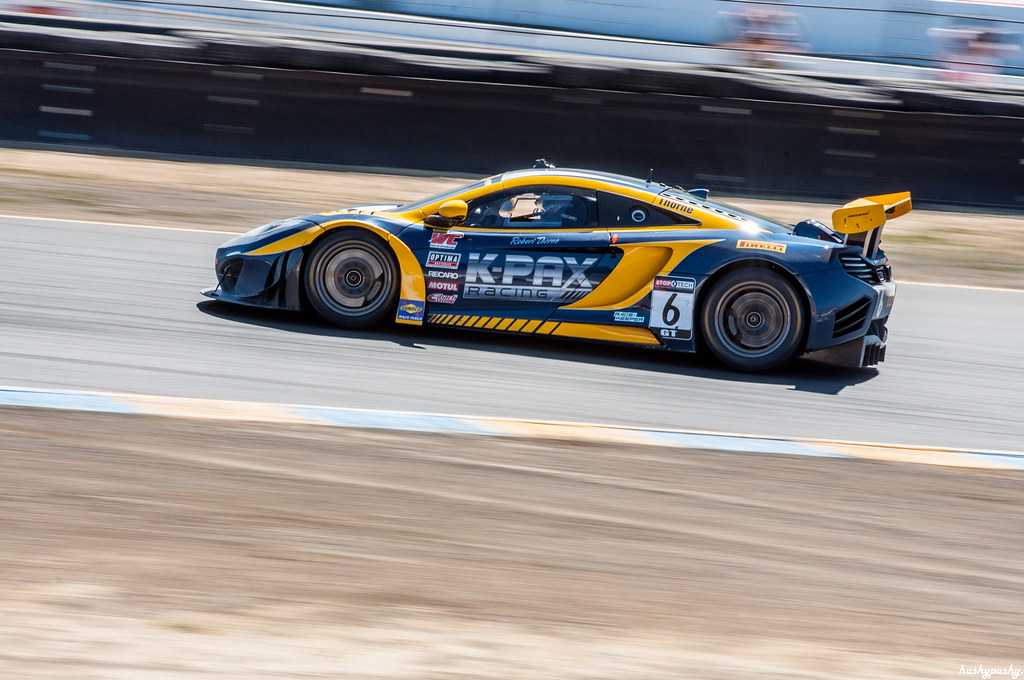 To be honest, I was never really a fan of the K-PAX livery on their Volvos. I always liked the colors, but when I looked closer at the implementation, it was always a little haphazard. 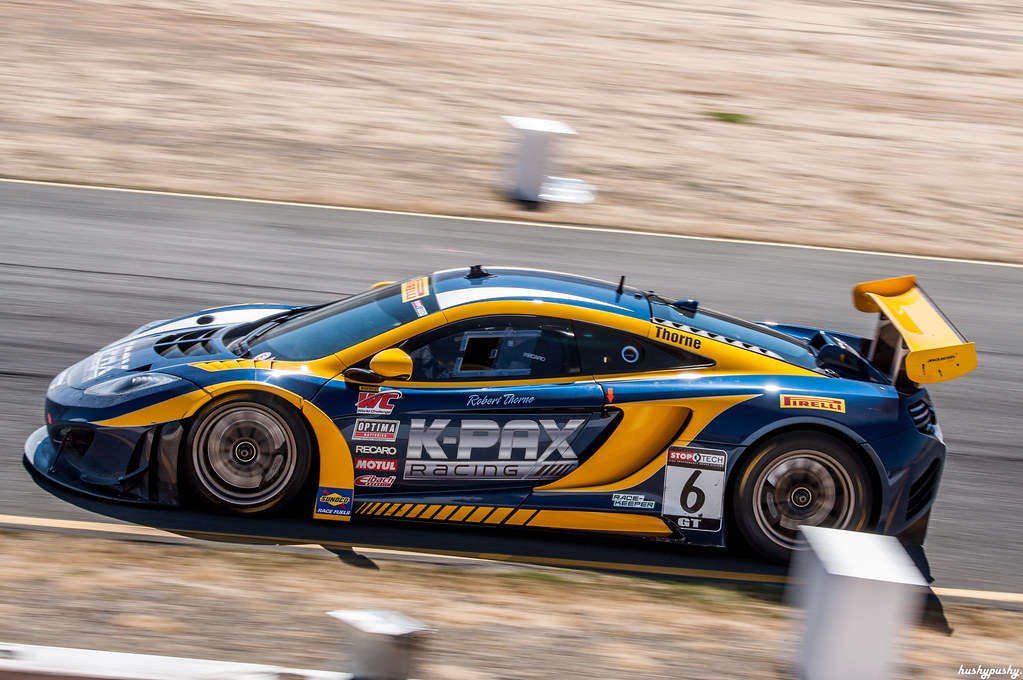 But on the McLaren? Wow, what a difference. I love how the yellow accents flow with the lines of the car, giving a 60’s vibe with how they curve around. 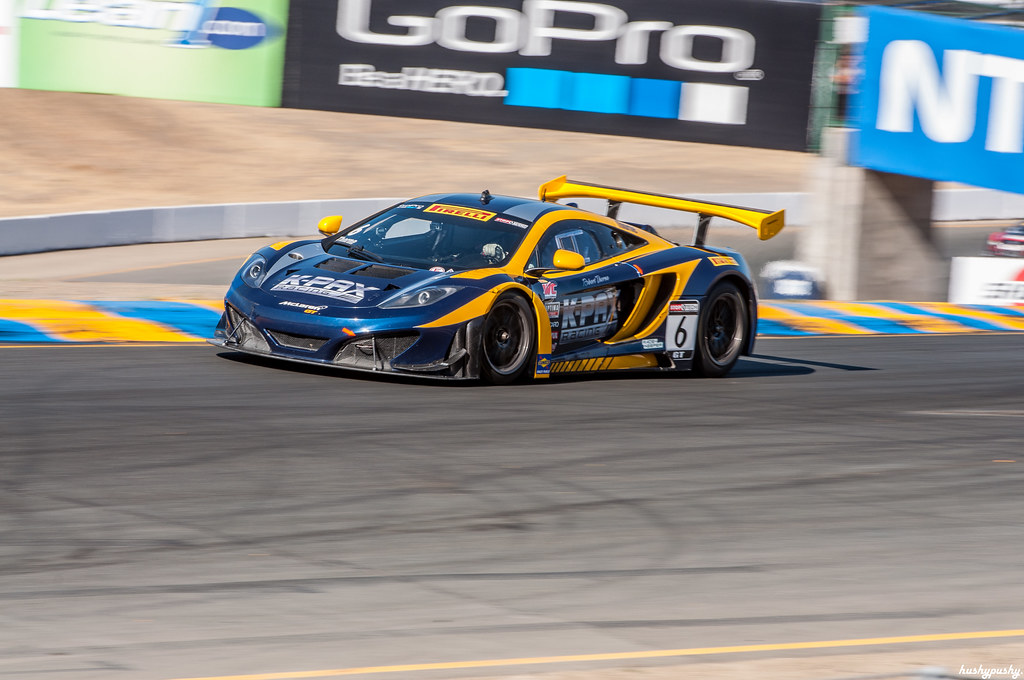 Will K-PAX switch to the new 650S? I wonder how they’ll integrate their livery on that front. 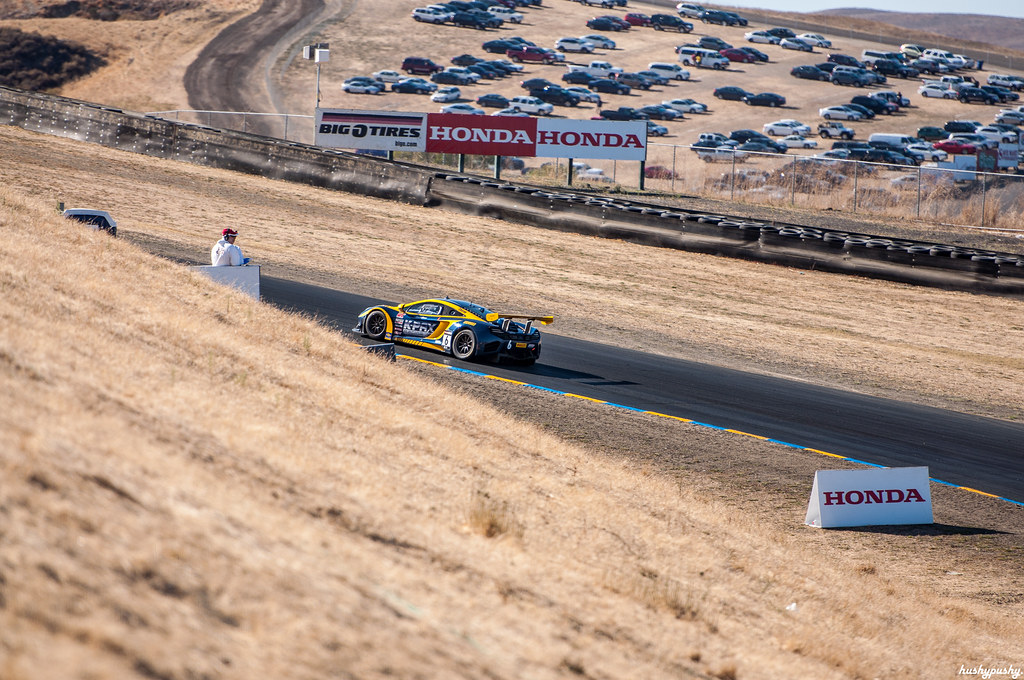 If you haven’t noticed, the major difference between the two cars is the wing: Alex Figge’s #9 has a blue wing, while Robert Thorne’s #6 has yellow. 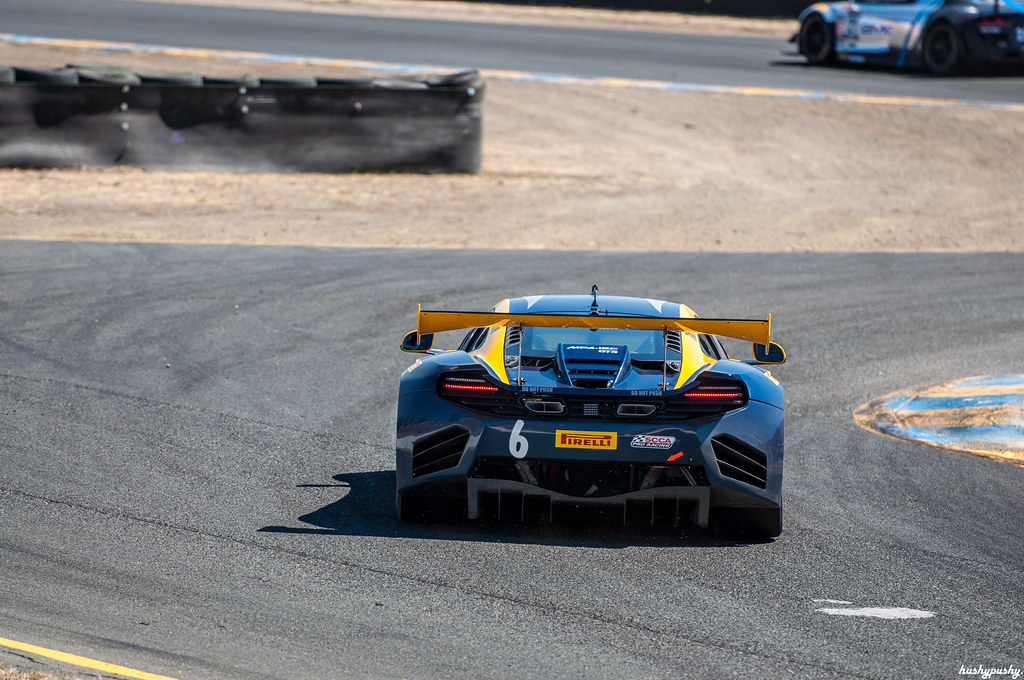 Another thing: all the McLaren race cars get Euro-spec tail lights–only the single line lights up for brakes, as opposed to the US-spec where both lines illuminate. I wonder why there’s a difference? Usually the European version is what the designer intended, and the North American version is crippled by the US Department of Transportation, but I’m not sure what the deal is here. 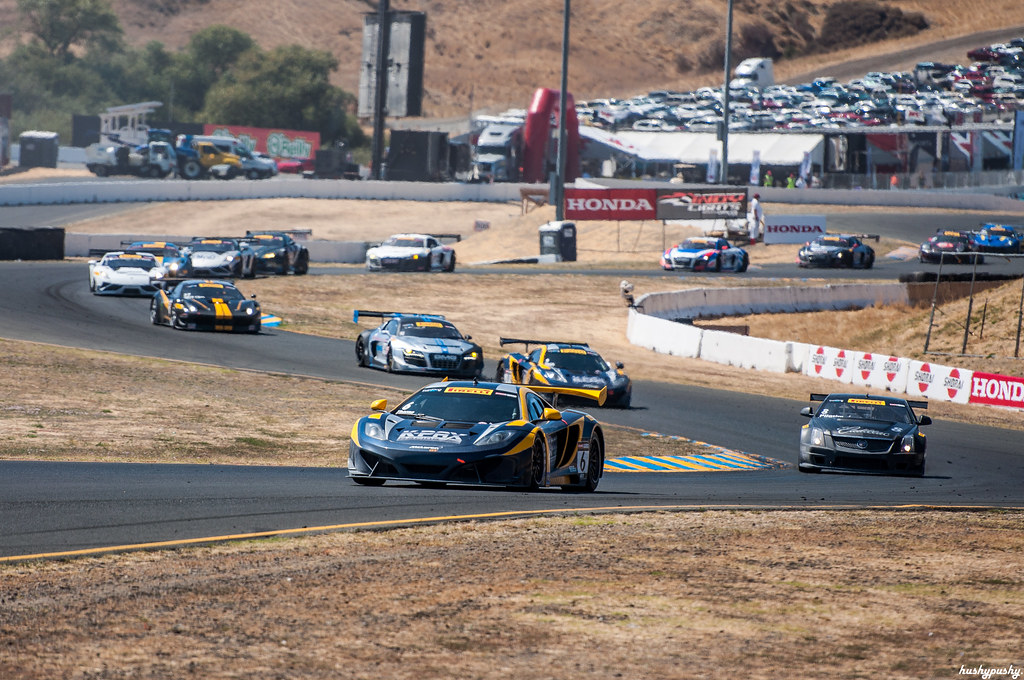 If you want to see supercars going head to head, do yourself a favor and catch one of these races–you won’t regret it. In my next post, I’ll highlight a bit of the variety that can be seen out there.