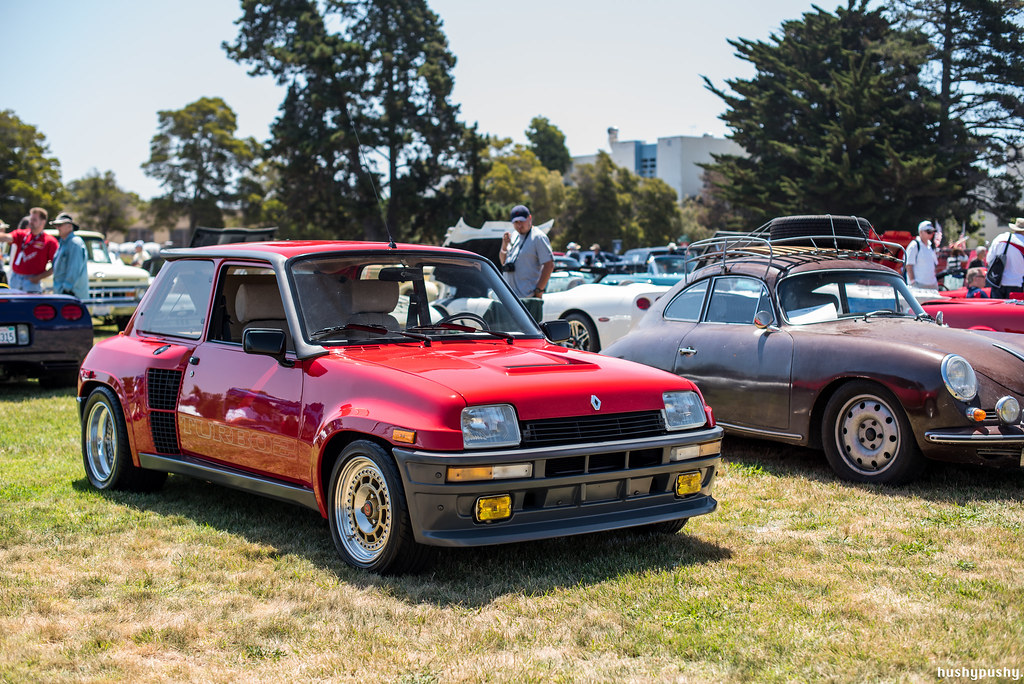 Nobody wants a face full of shrapnel. That’s why the Takata airbag recall is so scary–many cars are literally rolling deathtraps, and the parts to solve the issue can’t be made fast enough. 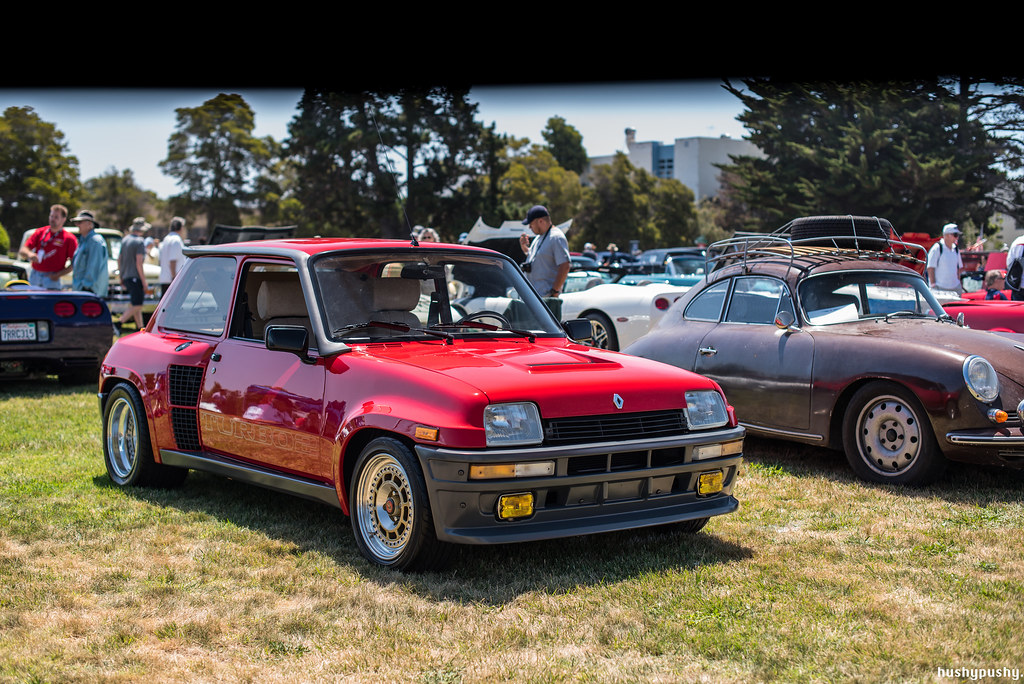 Luckily, with my Scion and an “old” Porsche, I’m completely unaffected. However, another big recall just hit me square in the jaw, and you can see it right above this paragraph. In 2015, Nikon recalled some D750’s–shortly after I bought one!–for a shutter issue. In their words, “the shutter in some Nikon D750 digital SLR cameras may not function normally, sometimes resulting in shading of a portion of images.” Unfortunately, here’s an example of that. 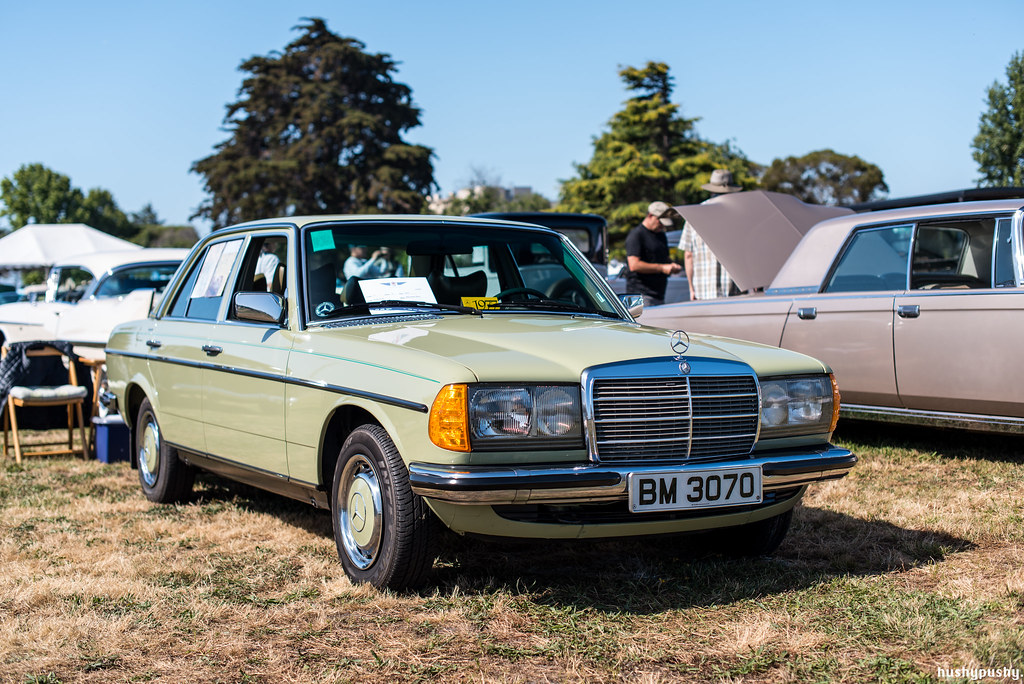 Well, I was using my camera for a lot of work (shooting McLarens at home and ChampTruck on the road) and my shutter was working fine, so I decided to roll the dice and keep shooting. Unfortunately, on this glorious Sunday in Alameda, it finally crapped out. It started to go on the fritz, and then finally gave up the ghost completely. 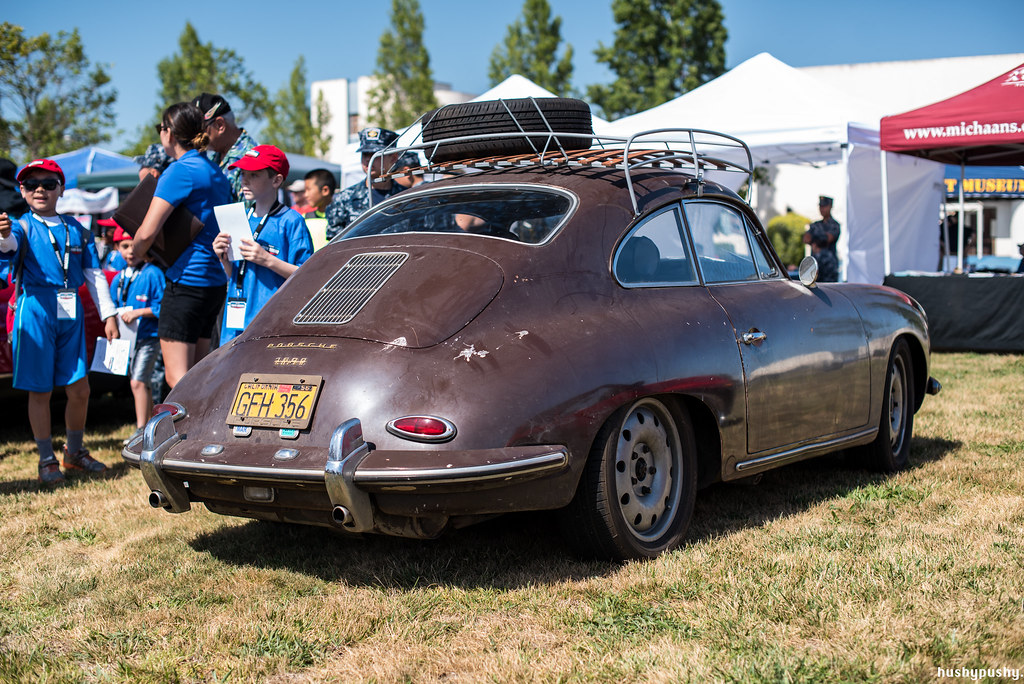 Which is a pity, because I was having a great time before that. Right when I arrived, I saw my friends Greg and Linda and their Porsche 356. They’ve definitely conquered the fear of having fun in that car–they drive it everywhere. And it showed up at a “Concours”–codeword for an event catering to obsessive polishing–wearing all its patina, dirt, and poop proudly. 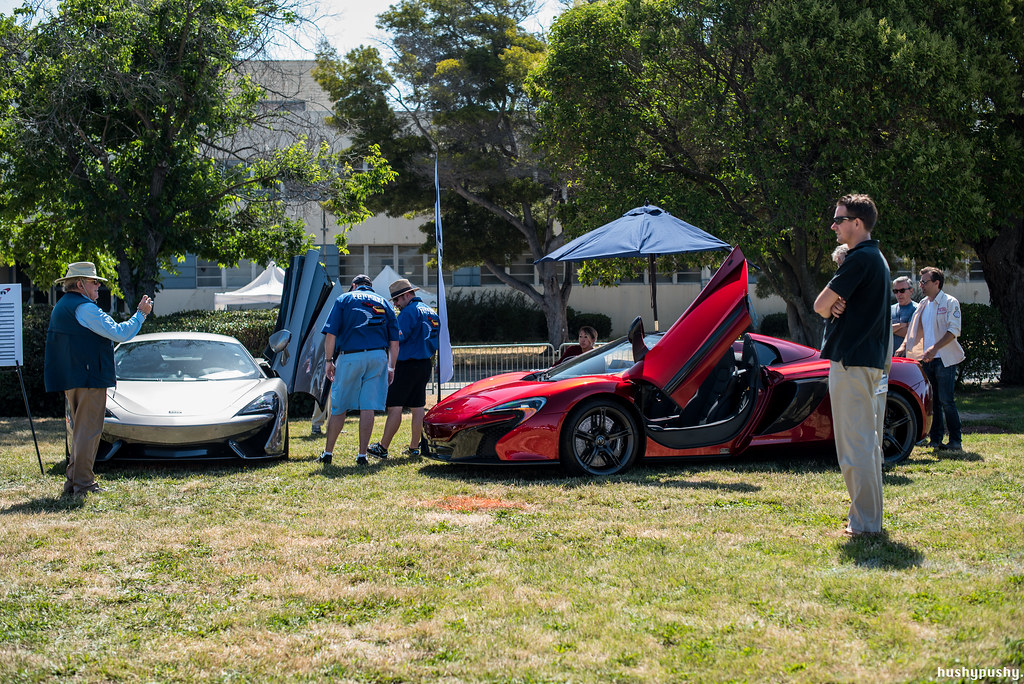 So what was I doing there? Well, showing off some McLarens. 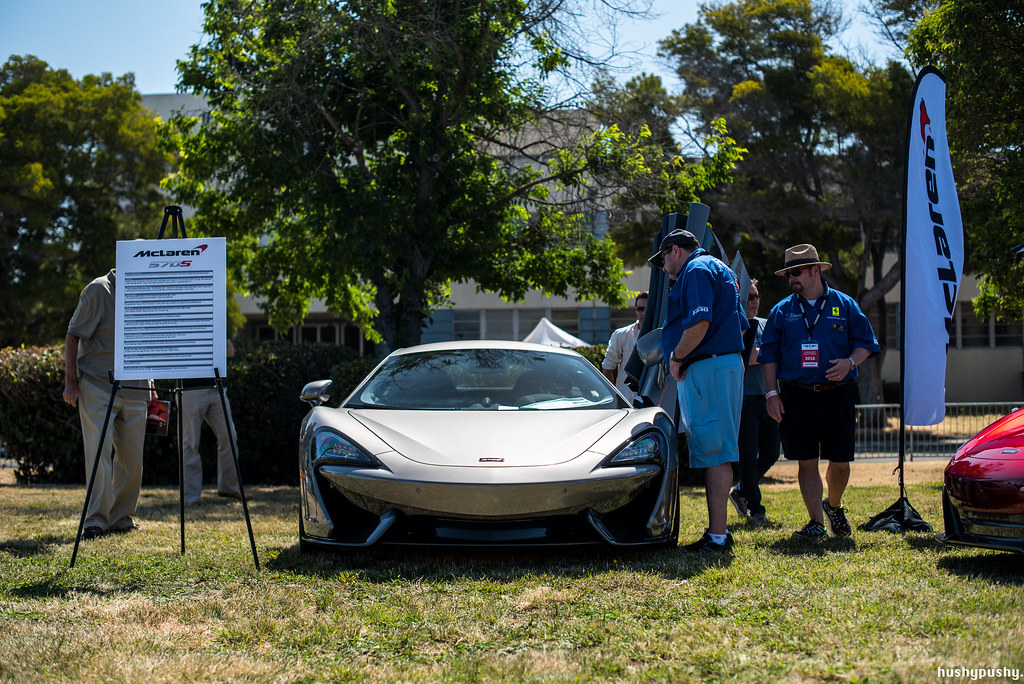 My coworker and I drove up there in a Blade Silver 570S and a Volcano Red 650S. Unlike the last concours we did, there was a pretty big crowd around us all day. 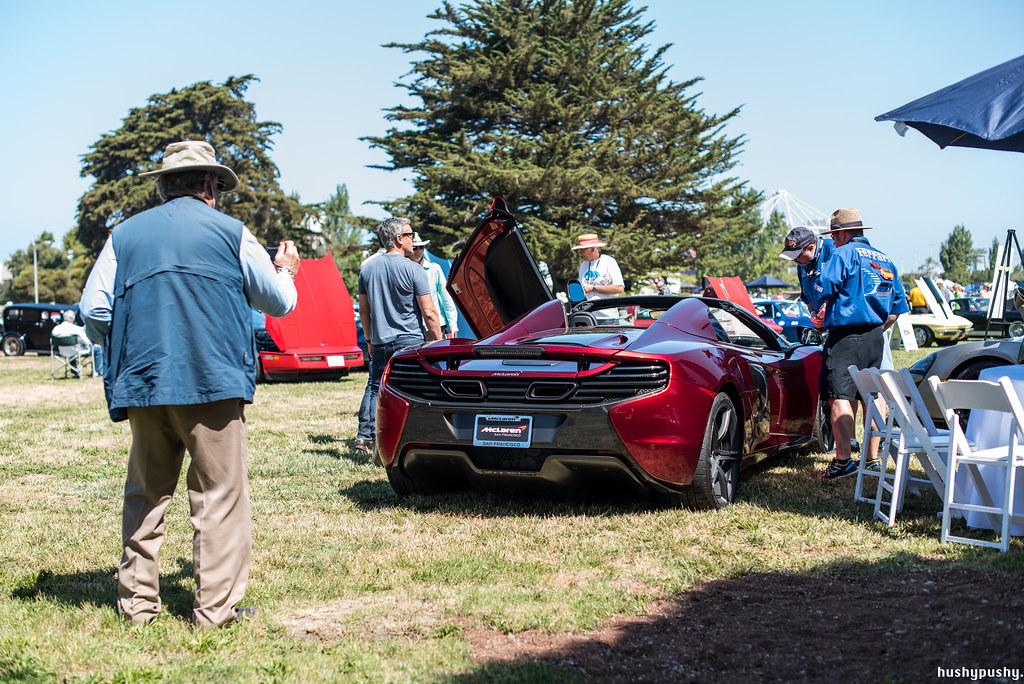 It was pretty cool to see how enthusiastic people were about seeing the car and taking pictures. People thanked us for bringing the cars out–a few people mentioned they had never even seen a McLaren in person before. I think the fact that Top Gear aired a film on the 675LT the previous weekend helped us a lot. Although, some guy did stare at the back end of the car for a while and then asked me if McLaren was a type of Corvette. 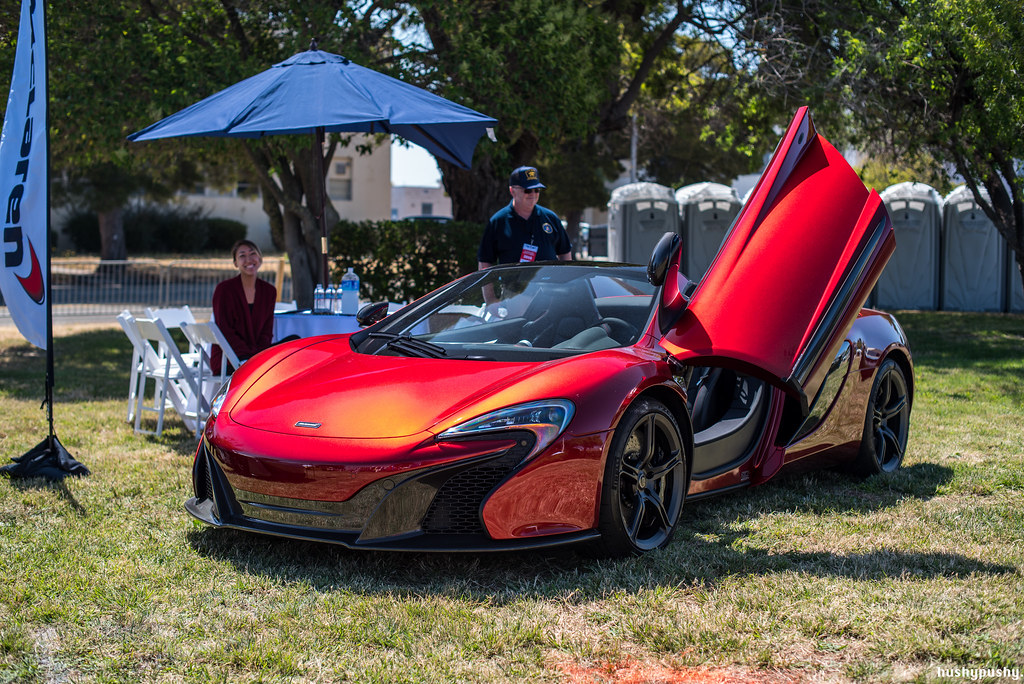 Smile! Not the most picturesque location, but you gotta admit it’s nice to be 25 feet from the toilet. 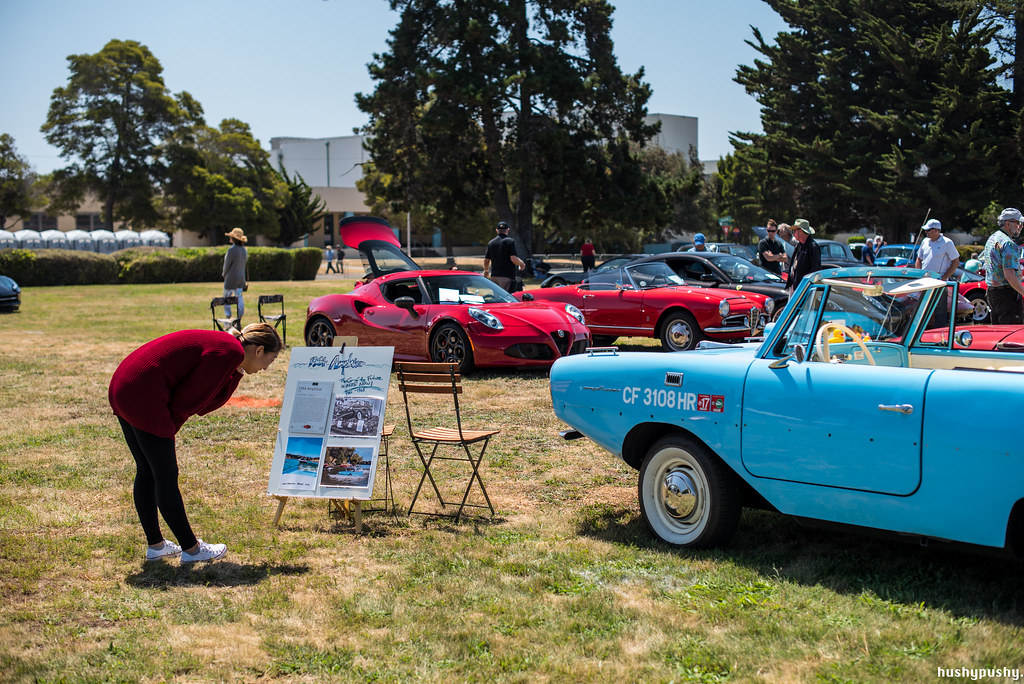 It’s not all work–we got to walk around and enjoy the show too. Jessica seemed pretty interested in this Amphicar, and I don’t blame her. What a funky little vehicle. 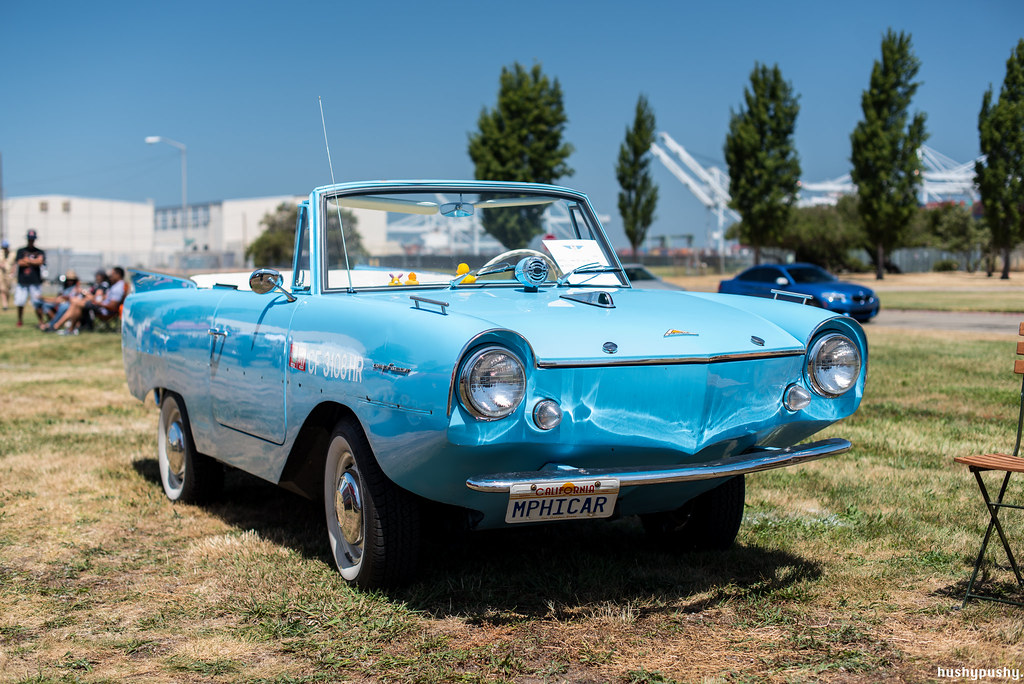 It’s a car AND a boat! When was the last time you saw one of these? 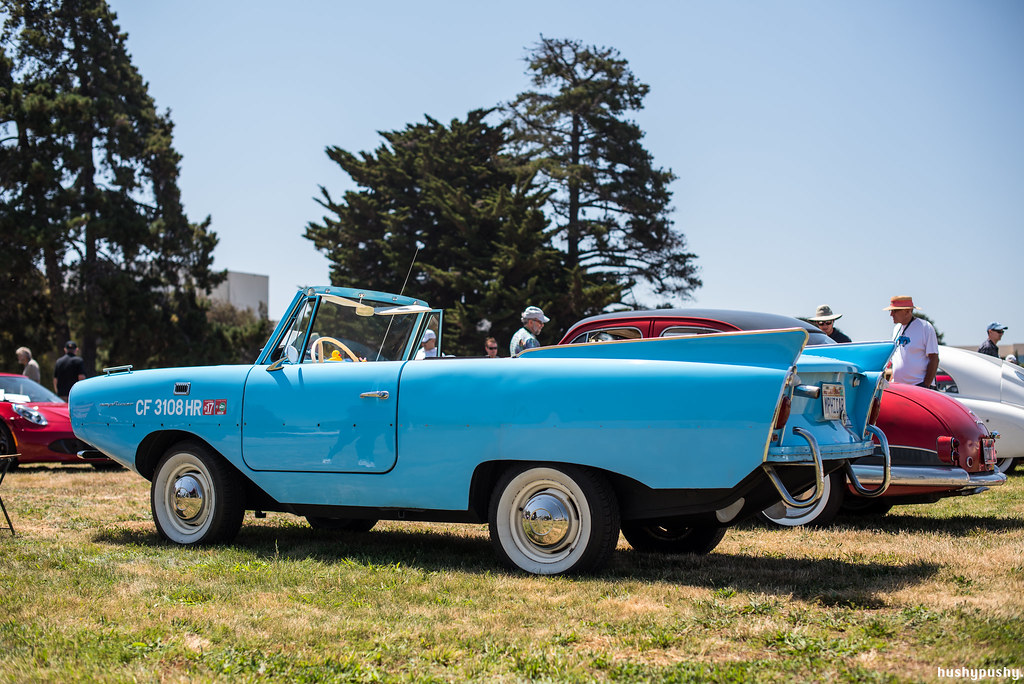 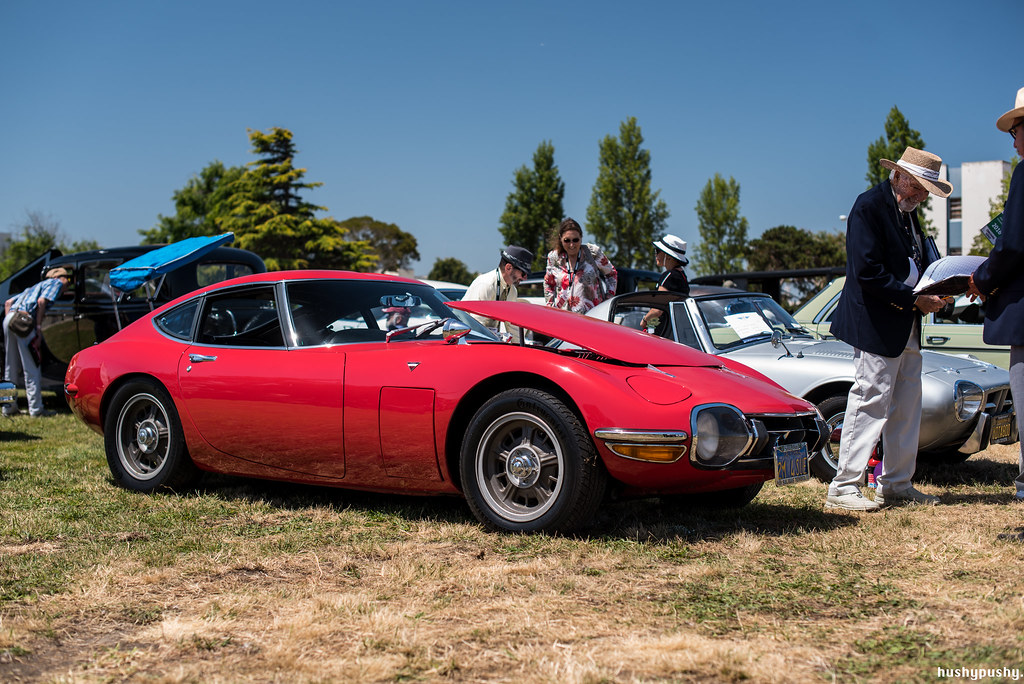 I love Japanese classics, and the 2000 GT is no exception. I always imagine it in white, but it almost has a Ferrari flavor in this red. 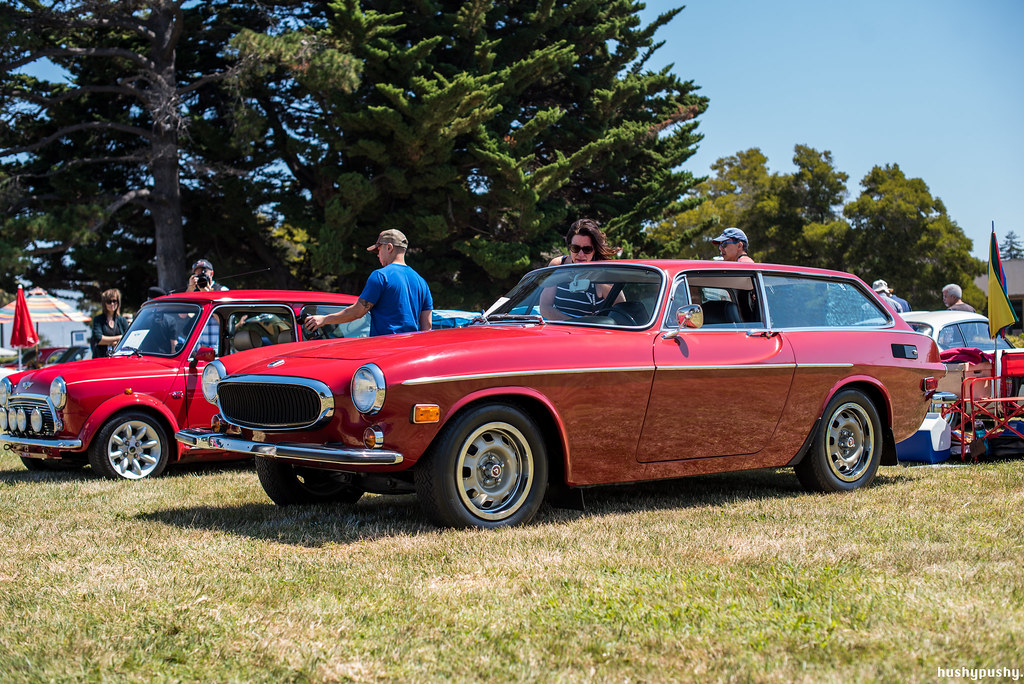 There were a lot of red cars there, now that I think about it. 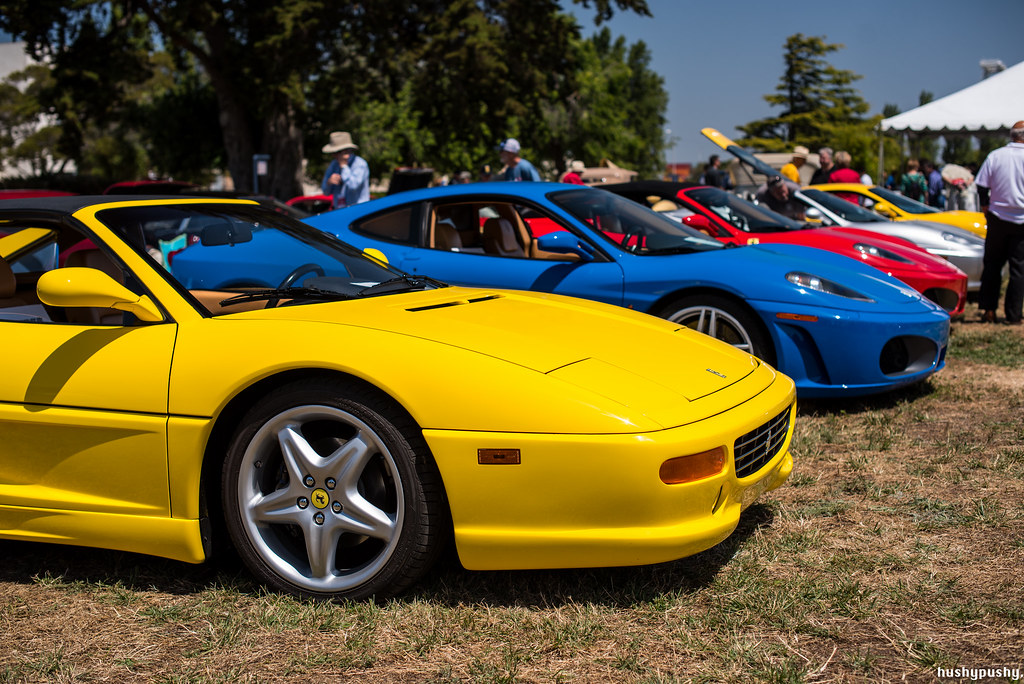 Although in the place where you would most expect to find bright red, there were some other refreshing hues. 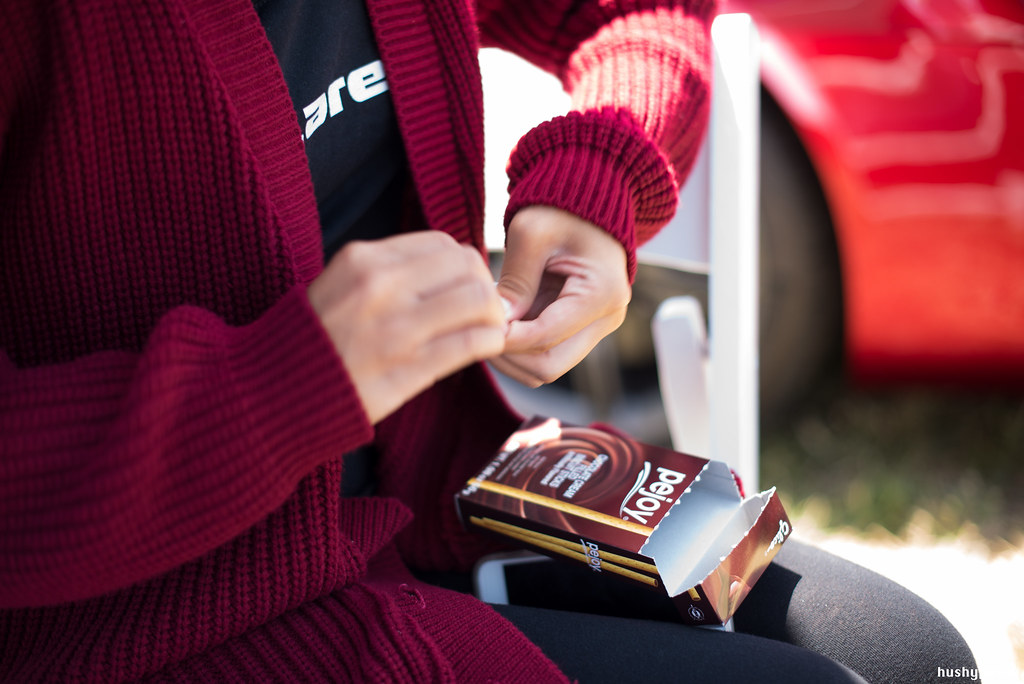 I didn’t actually take many photos on that first quick walk-through, figuring I had the rest of the day to grab some snaps. After one lap of the show, we retreated back to our spot and dove into some Japanese snacks. 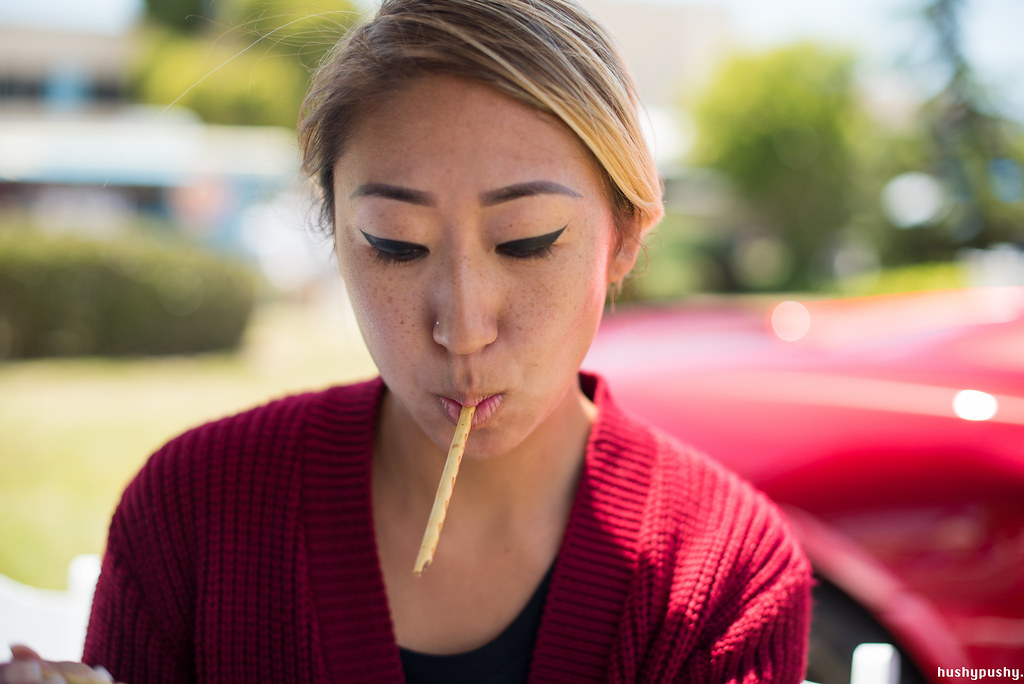 People make a big deal out of Pocky, which is a biscuit dipped in chocolate. If you like that, check out its lesser known sibling Pejoy, which is also made by Glico but is the reverse formula—it’s like a biscuit straw filled with chocolate. 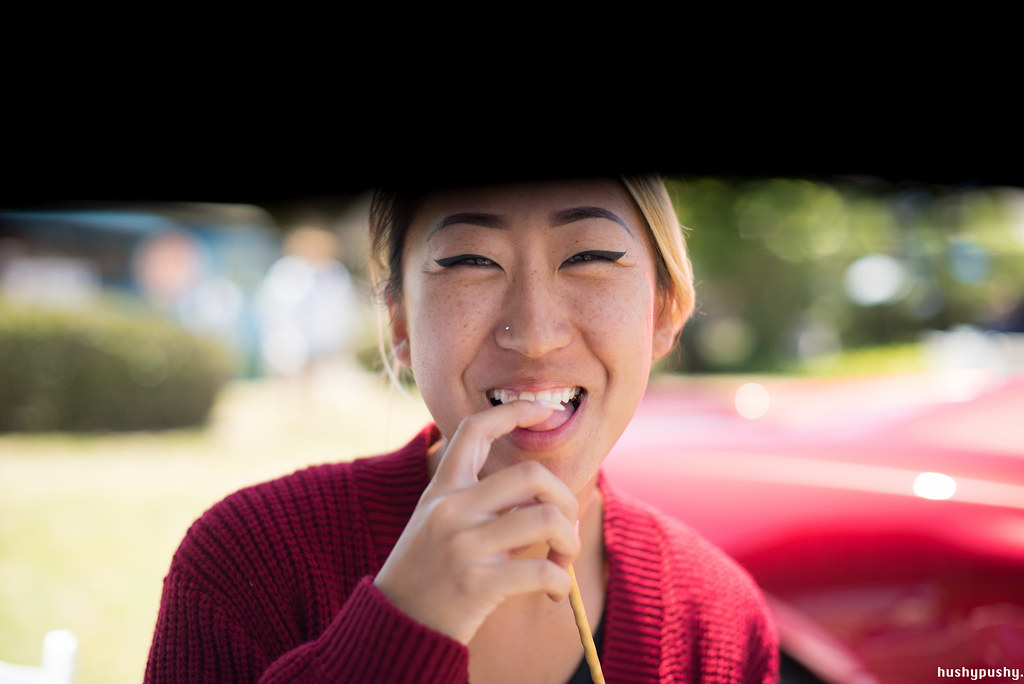 And then it happened. The shutter made some weird noises and when I checked the photos, even more of the shutter was in frame. At this point the top display of the camera read ERR instead of the aperture, and the shutter refused to properly function. I read about a few quick fixes online, but it seemed I was sunk because nothing changed.

So that’s it for now–I sent the D750 in. I still have my D90 so it’s not the end of the world, and I actually have not one, but two more event posts coming up: the long overdue Palm Beach wrap-up, plus some shots from the Sonoma Historics! So check back soon.