I am not an early bird. I’m the type of person who sleeps in on Christmas morning and isn’t very familiar with the concept of “the sunrise”. Honestly, I wish it wasn’t like that–I love the cool, crisp air in the morning as well as the lovely crepuscular rays peeking over the horizon. But, quite clearly, I don’t love that stuff enough to drag my corpse out of bed in the early dark hours to experience them first hand. 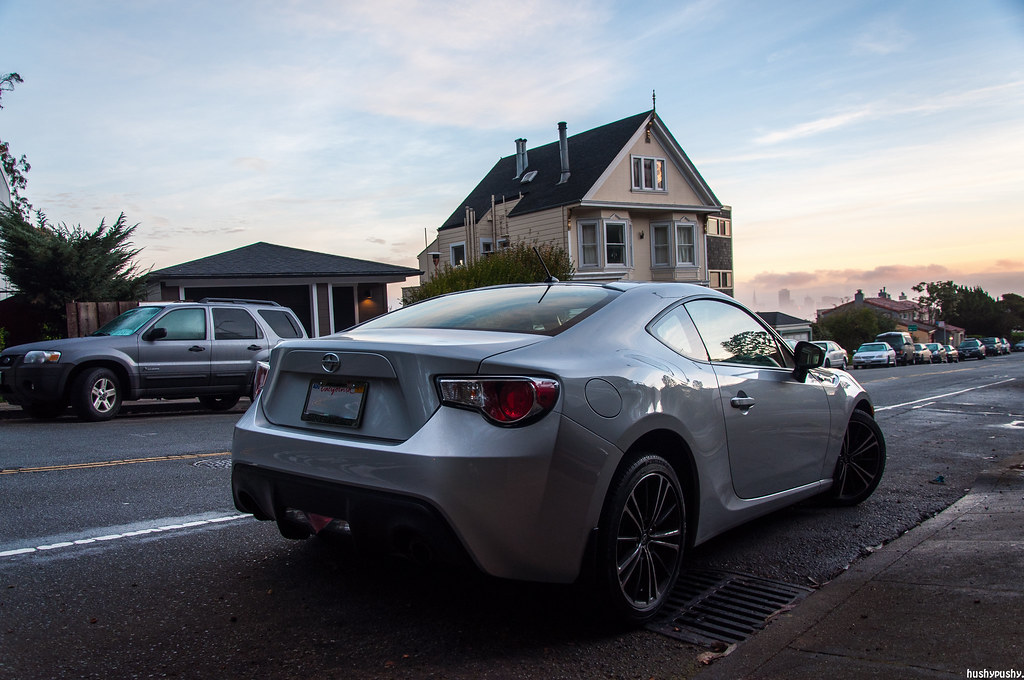 And that is why, believe it or not, I had NEVER been to a Cars & Coffee meet before 2015. Part of it is because I don’t have much interest in static car shows, but mostly because I just didn’t want to wake up so early. 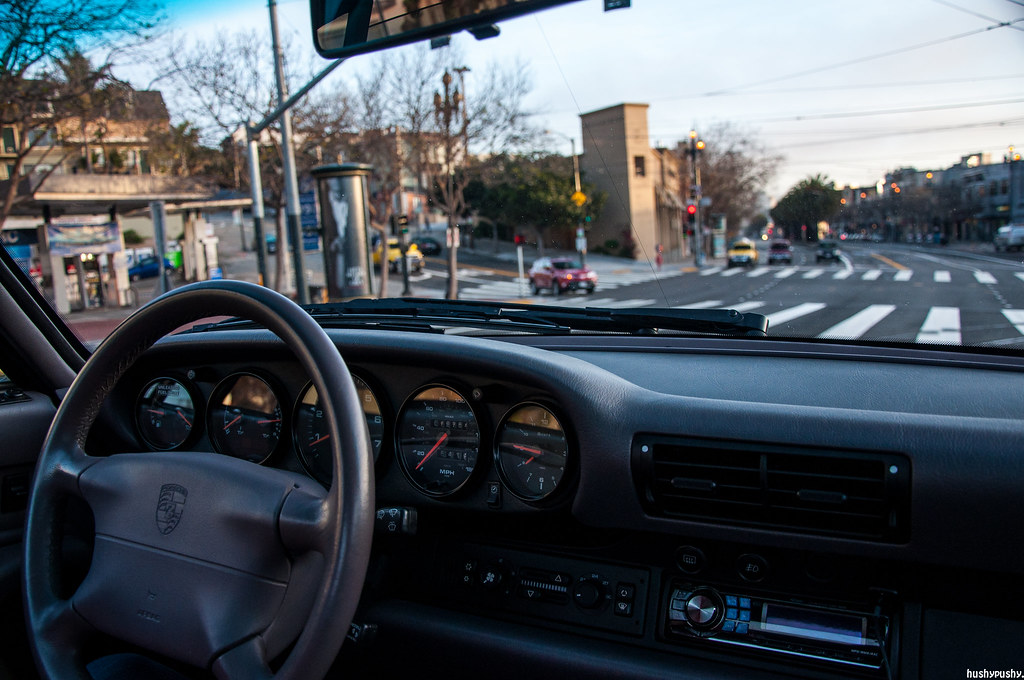 But on February 1st, I awoke in darkness and headed to San Francisco to meet my buddy Art and his newly acquired oil-cooled Porsche. After a few snags getting out the door, we managed to be on the road around 7:40. The meet, held at the Blackhawk Museum in Danville, was supposed to start at 7:30 AM, but people always show up much earlier than that in order to get a good spot in one of the main parking areas. 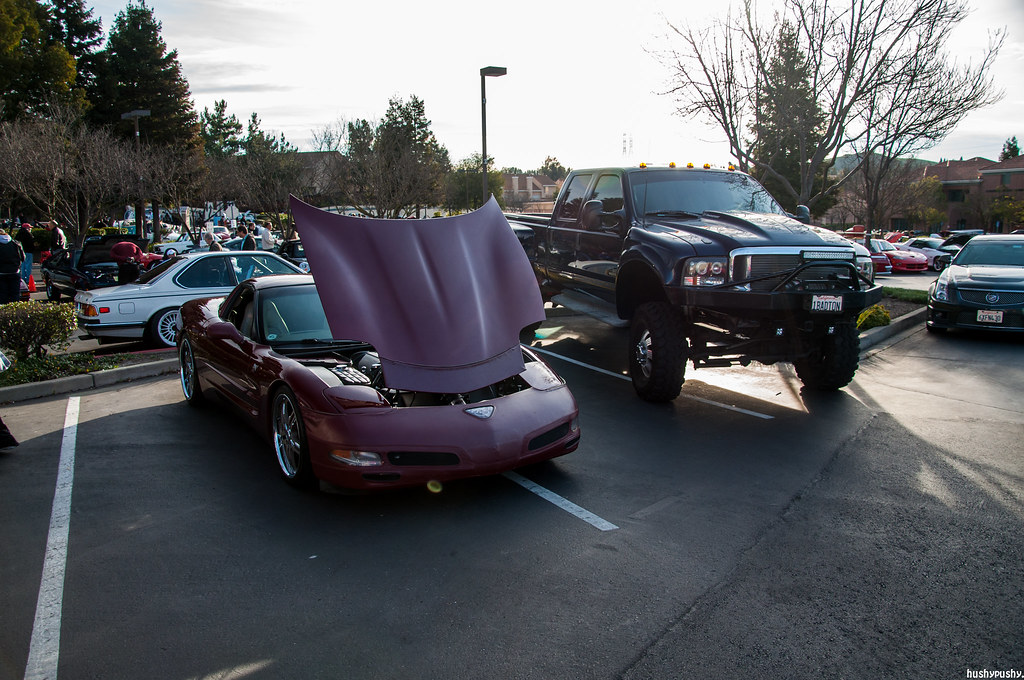 I was a bit deflated after we got there, it has to be said. Despite the fact that we were turned away from entering any one of the “show” lots in the 993 because there were so many cars there (some said it was the largest Blackhawk C&C they’d ever seen), there were these sort of “quality” vehicles and their equal amount of respect toward parking. 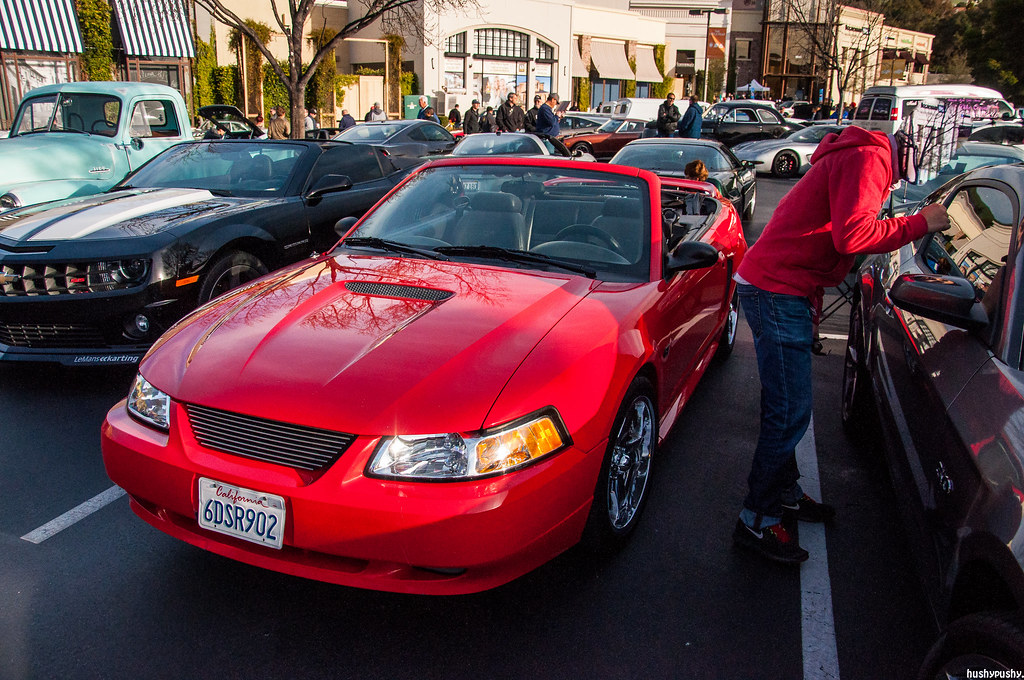 It’s very easy to pick nits and notice the things you don’t like, especially at Cars & Coffee, which has an “everybody’s a winner” attitude. If you show up early enough, you can park literally anything in the show lot. One day I’ll test this by bringing my mom’s 2004 Volvo out there…but I digress. You have to really look to find your personal stars in a place that has everything, so the point here is simple: Challenge Accepted. 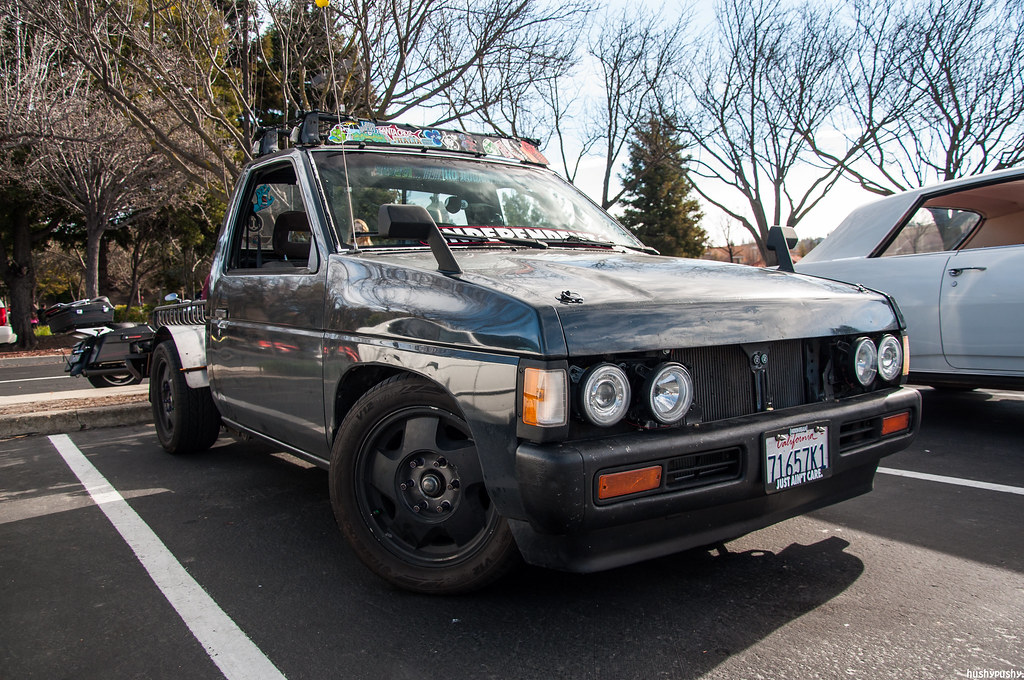 I was actually pretty intrigued by this thing, and not just because of the fender mirrors. Sure, it looked like a high school student had gotten ahold of it, but at least they were comprehensive. 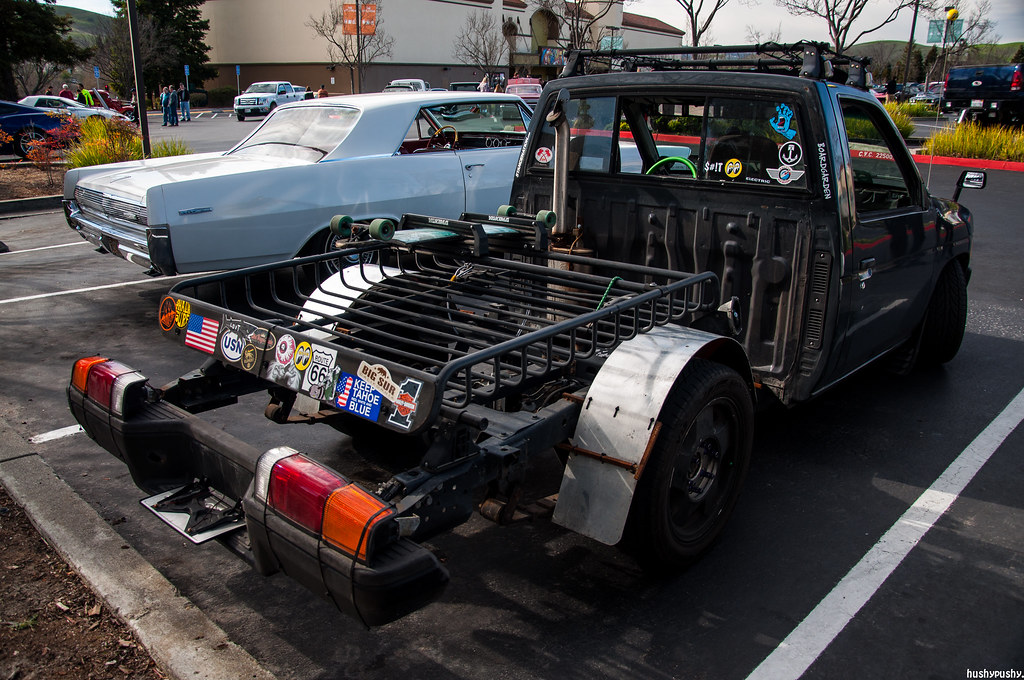 Functionality? Surely reduced. But when the rest of your high school parking lot is filled with ten-year-old Camrys and Accords, you can imagine how much of a splash this makes. 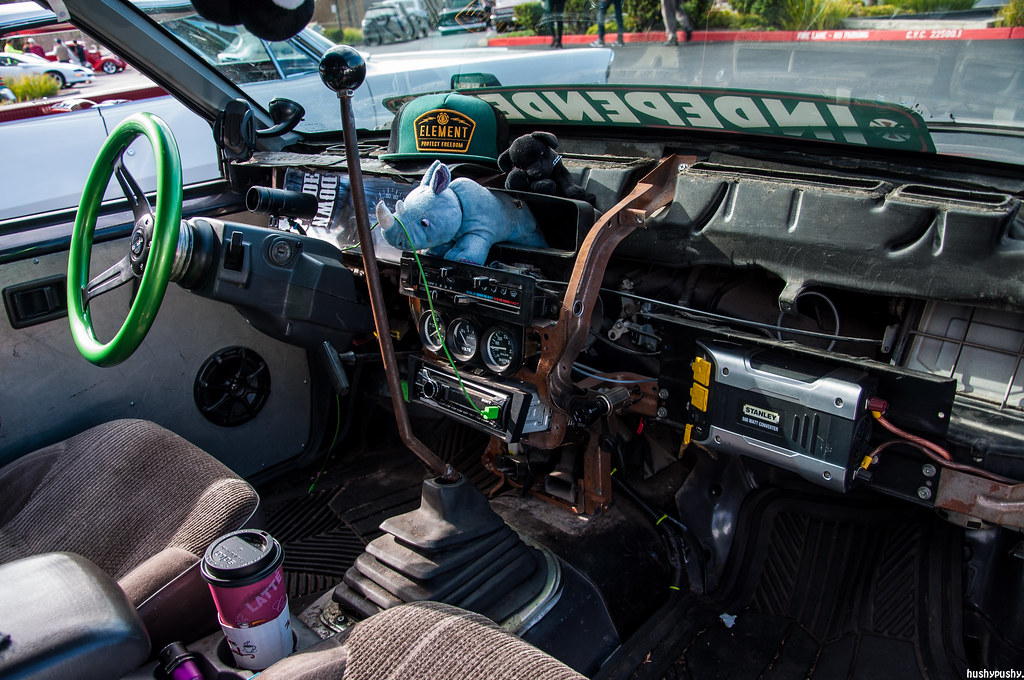 Ah, to be young again. This thing is impractical, unsafe, and ridiculous–but isn’t that the point? The owner was even friendly enough to invite me to open the doors and look inside, which was unsurprising. After all, he probably built it for attention, and that’s what it was getting. 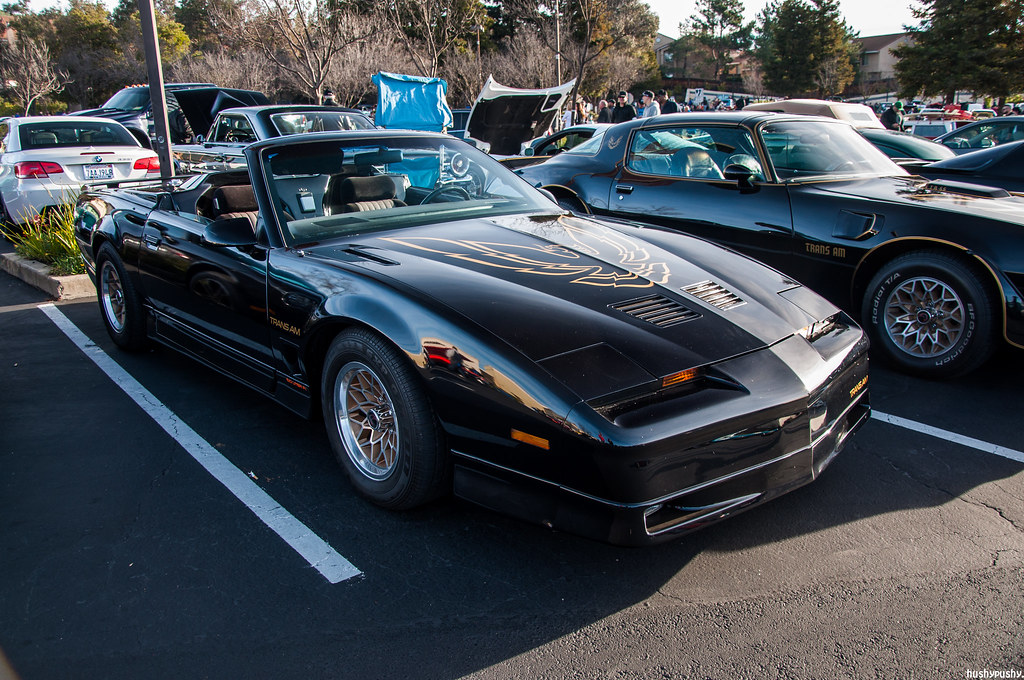 For better or for worse, that was the only homegrown contraption I saw. There were quite a few cars that looked like they’d only been driven on Sundays, like these Trans-Am’s for example. Now that’s something you don’t see every day. 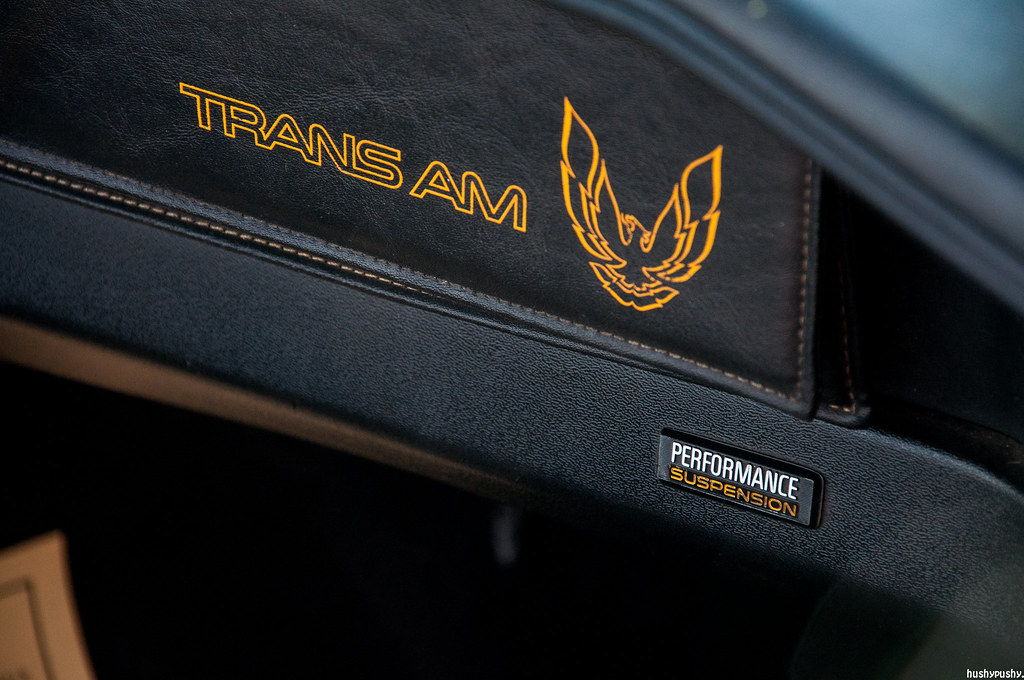 As always, it’s the little details in this hobby that really create the immersive effect; the more you look, the more you see. 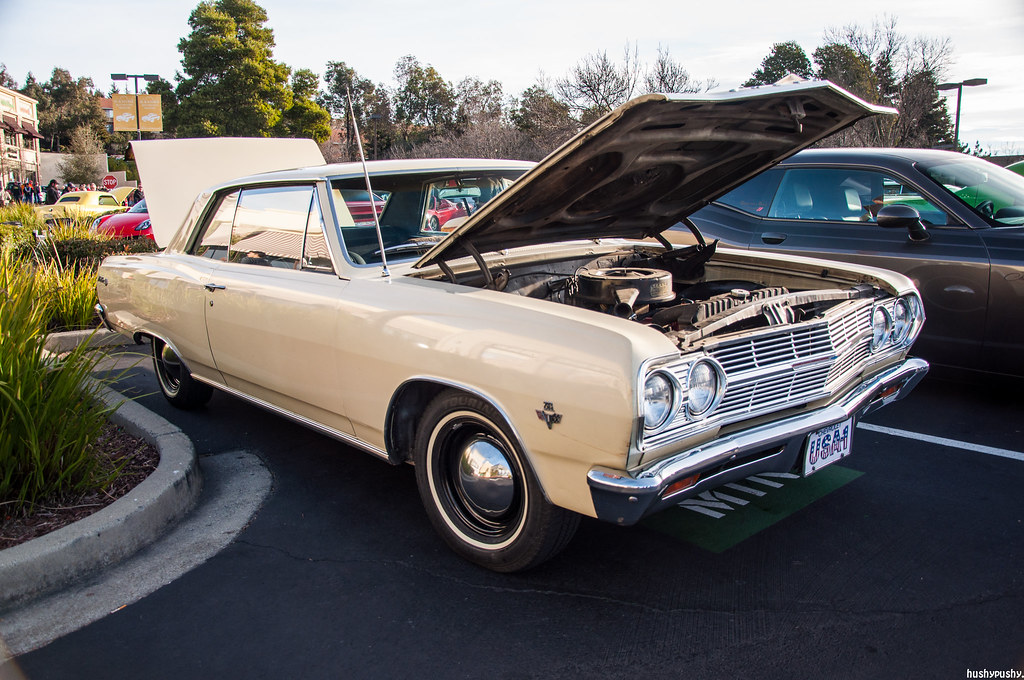 This was another standout for me, and entirely for personal reasons: my dad had a 1965 Chevelle hardtop when I was growing up. 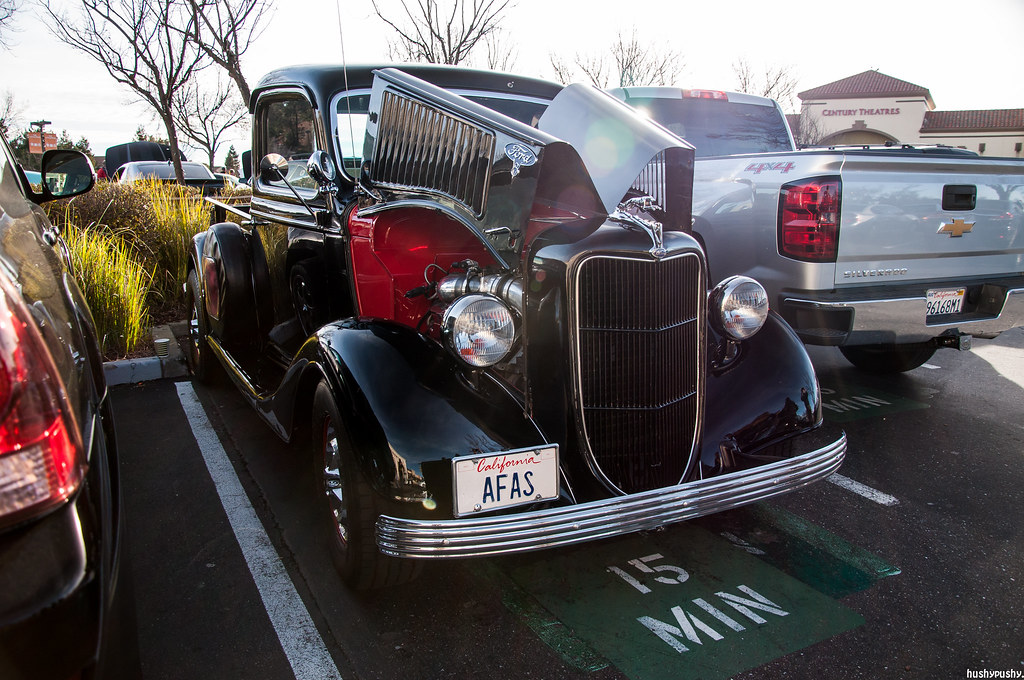 Save the best for last? Eff that. On the heels of the last paternal vehicle comes another one: this 1936 Ford Pickup that I’ve seen many times before. Over on Ellis Street in San Francisco between Larkin and Polk is a shop called “Allied Engine” and this truck is usually sitting outside, as well as other cool vintage cars. Anyway, I actually own a ’36 Ford pickup, a “barn find” of sorts; my dad bought it in 1972 and after his stroke in 1999, it has never been driven. My truck, however, is a bit sacrilegious: back in the 80s it was hot rodded with…a small block Chevy engine. Swapping SBC’s into the “wrong” chassis is definitely nothing new, that’s for sure. 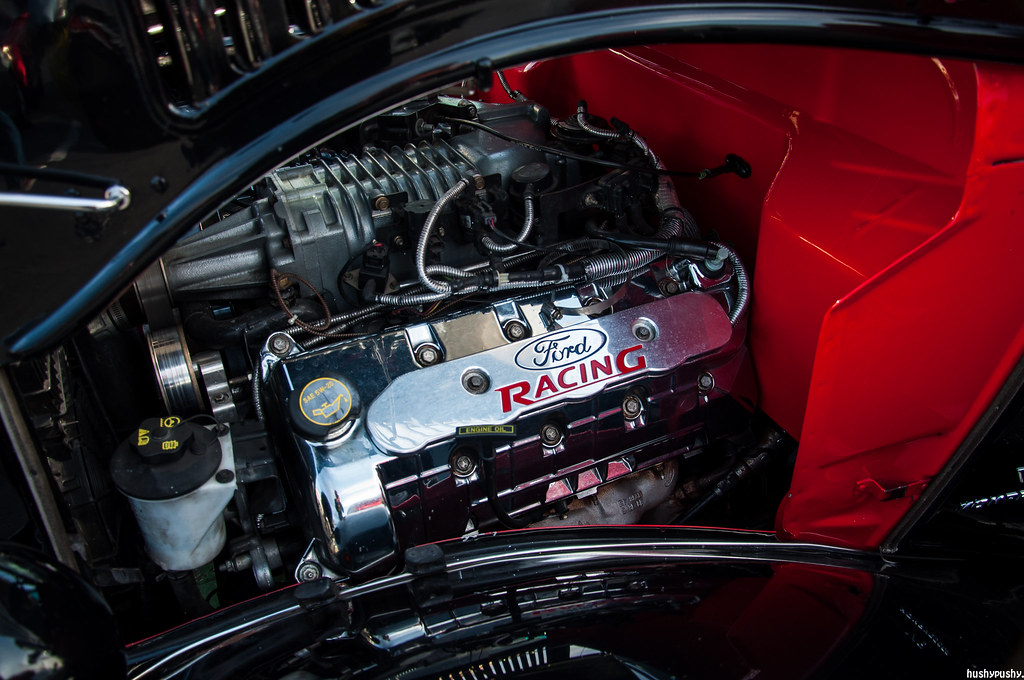 No worries about any of that here! Quite clearly, that is a supercharged Ford V8. Hell yeah! 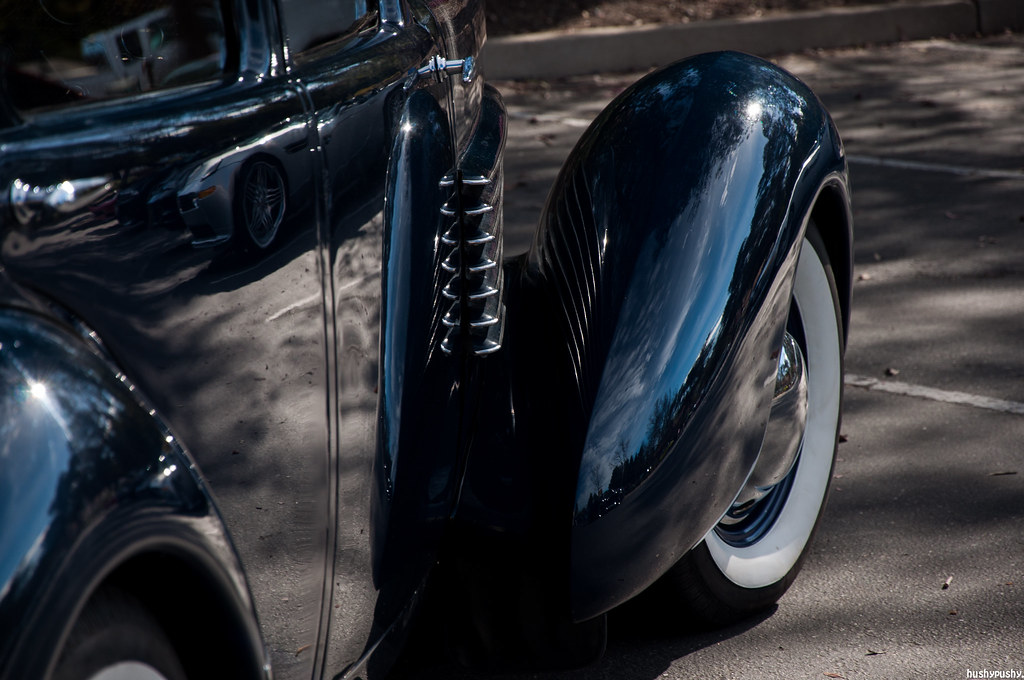 Sidestepping in time, there was a lovely Cord. 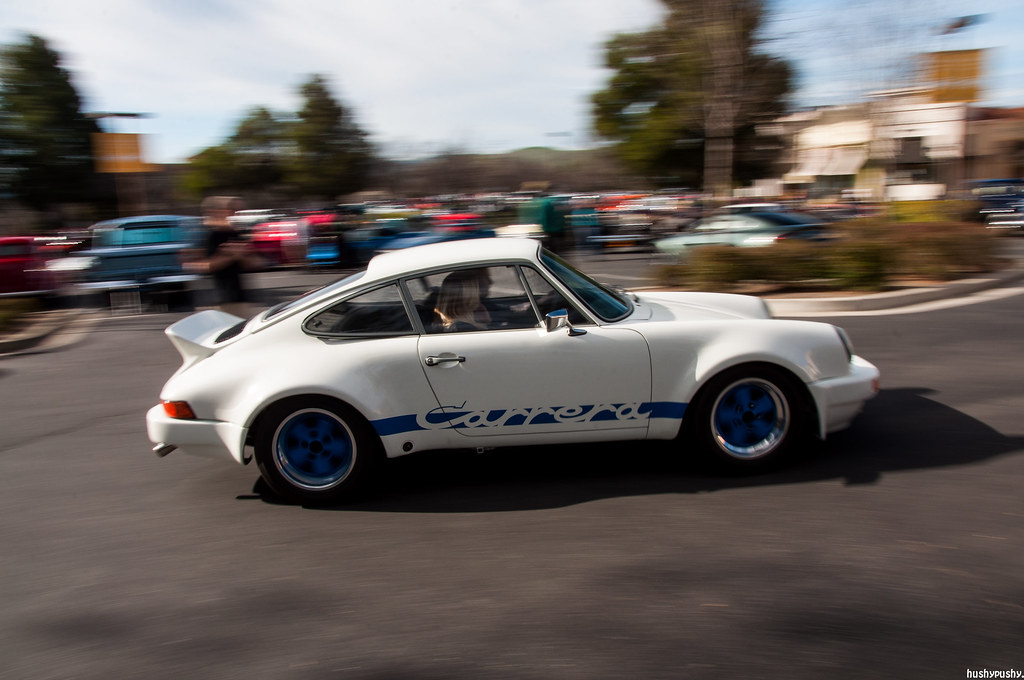 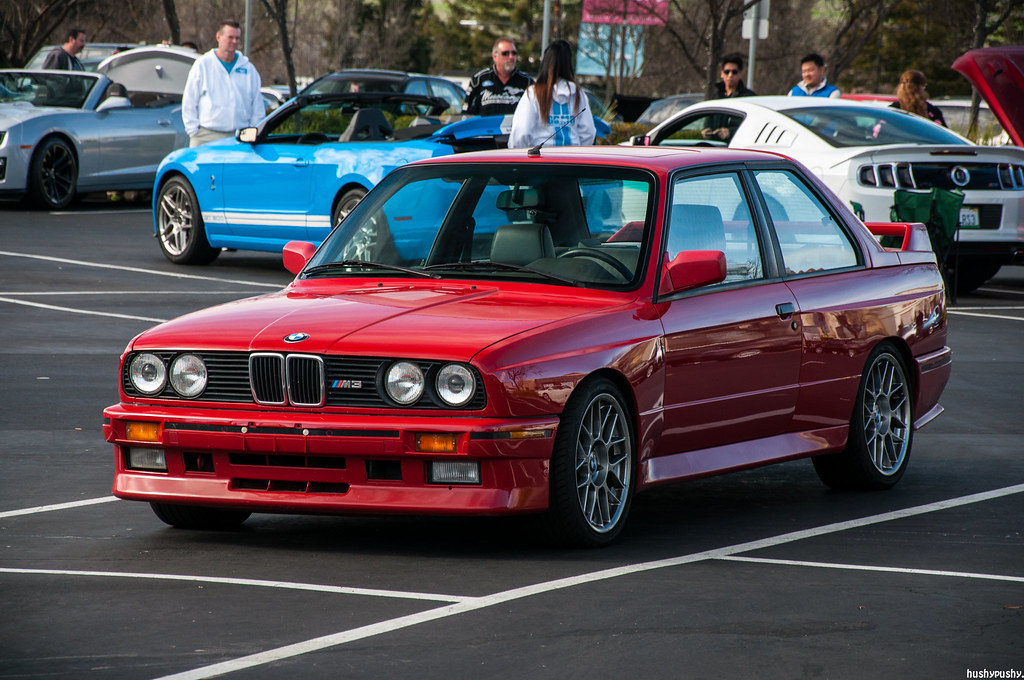 Strangely, for how many E30 M3’s were made and how their popularity has exploded in recent times, there was only one in attendance. 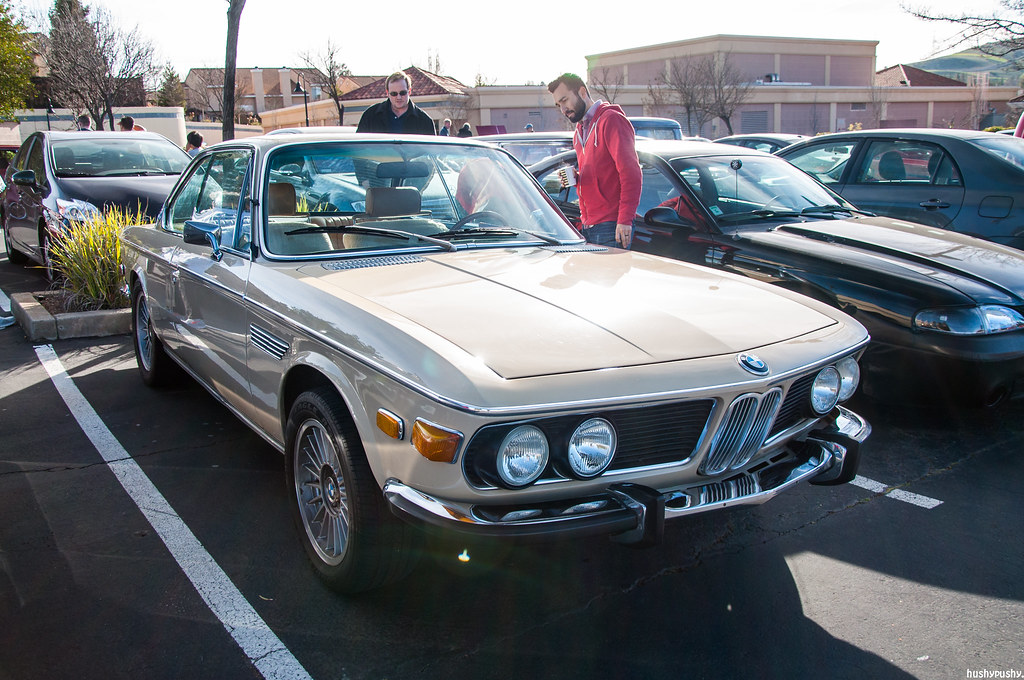 After all this, you may be wondering why I decided to wake up at 5 AM on a Sunday to see these things. Well, part of the catalyst was to see my friend Brendan and his BMW. He had recently done a few things and I was anxious to see. Plus, it’s always nice to catch up and get some face time with friends. 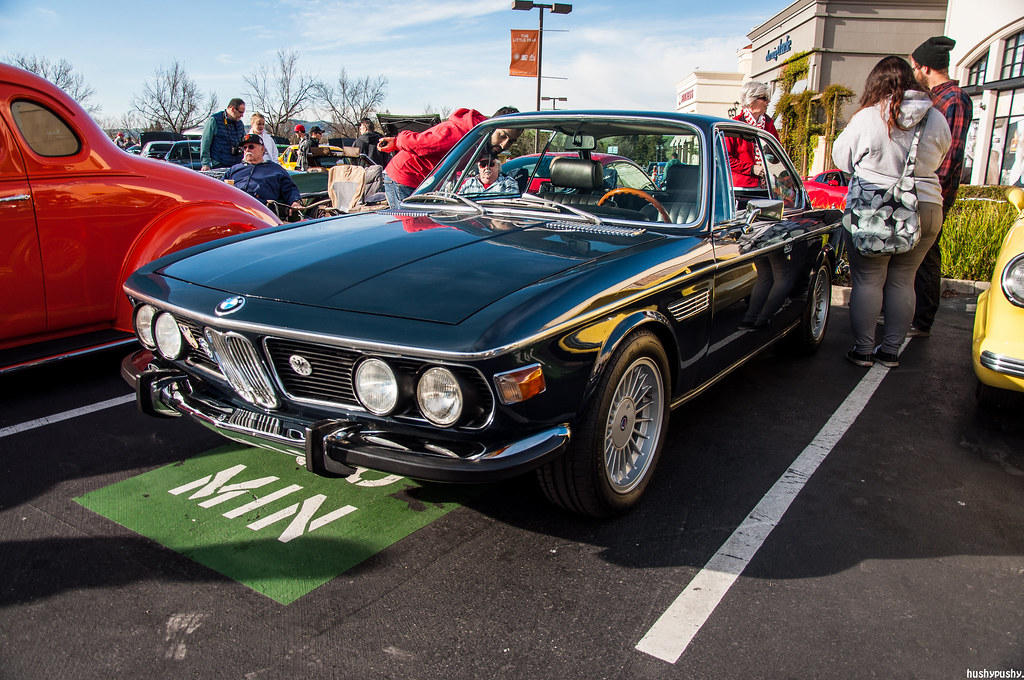 Speaking of E9’s, there was one in attendance that could be legitimately considered famous. This Atlantik Blue (NOT Atlantic Blue, which is a very different BMW color) 2800CS was the sixteenth E9 ever made! Even more remarkable, it was driven over 400,000 miles by the original owner, Murray Fowler. He passed away recently, but the new owner is an older lady who definitely loves and appreciates it. (If you’re interested in this car, get on Google and type in “Blu Max BMW”) 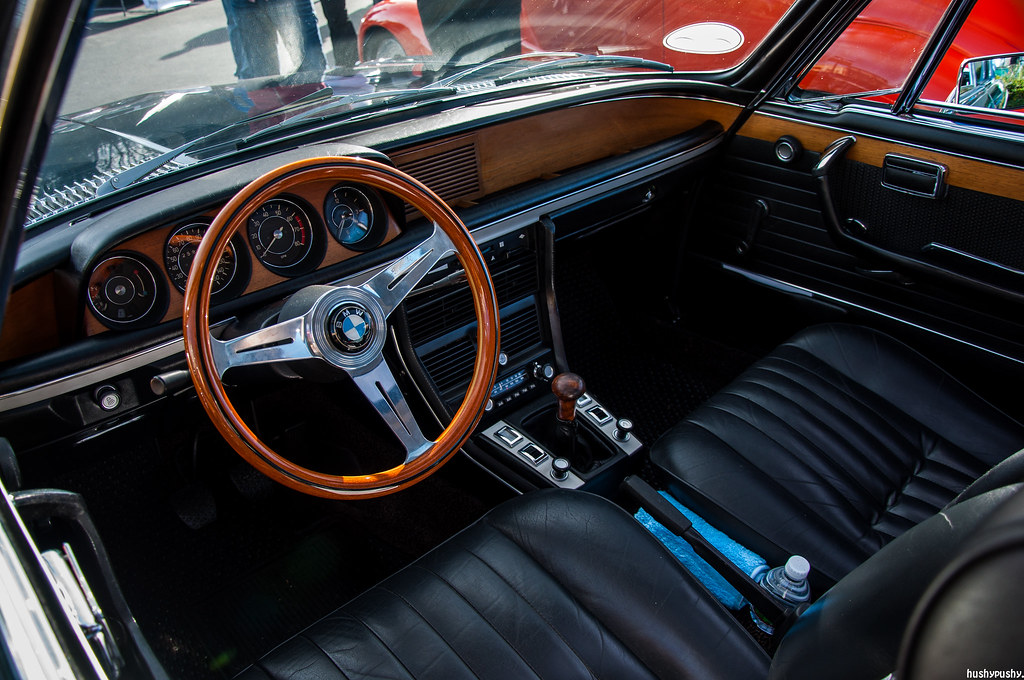 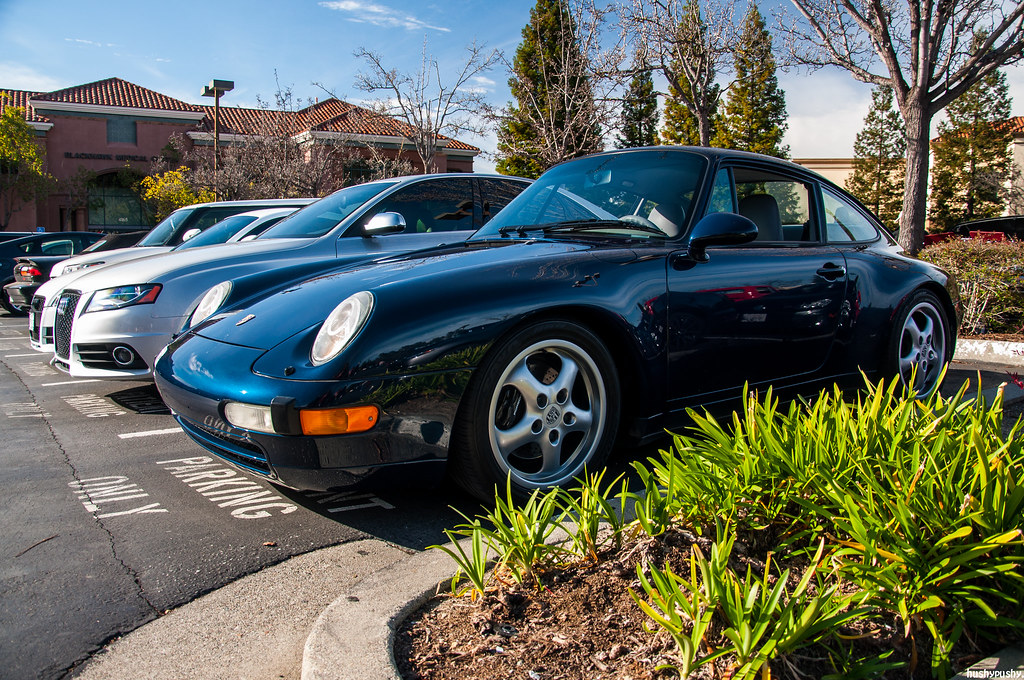 Finally, spots started clearing up, and Art moved his 993 into the actual “show” lot. By then, most of the attendees had left, even though it was only 9 o’clock. Where does everyone need to go on Sunday mornings? 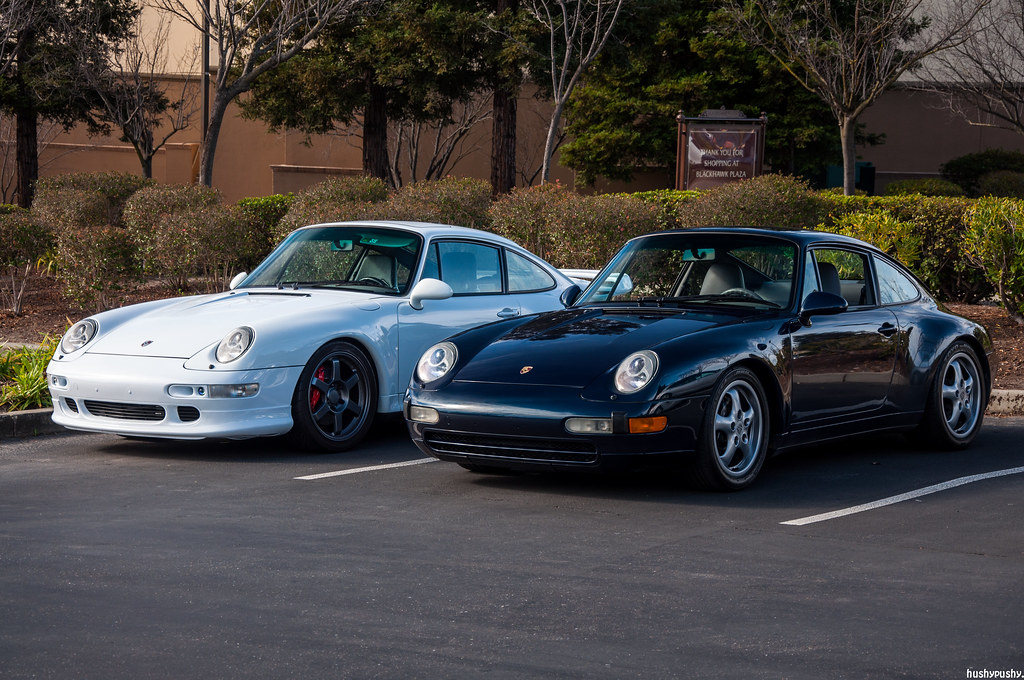 After things cleared up even more, he parked his Carrera next to this Carrera S so we could do a bit of comparison. 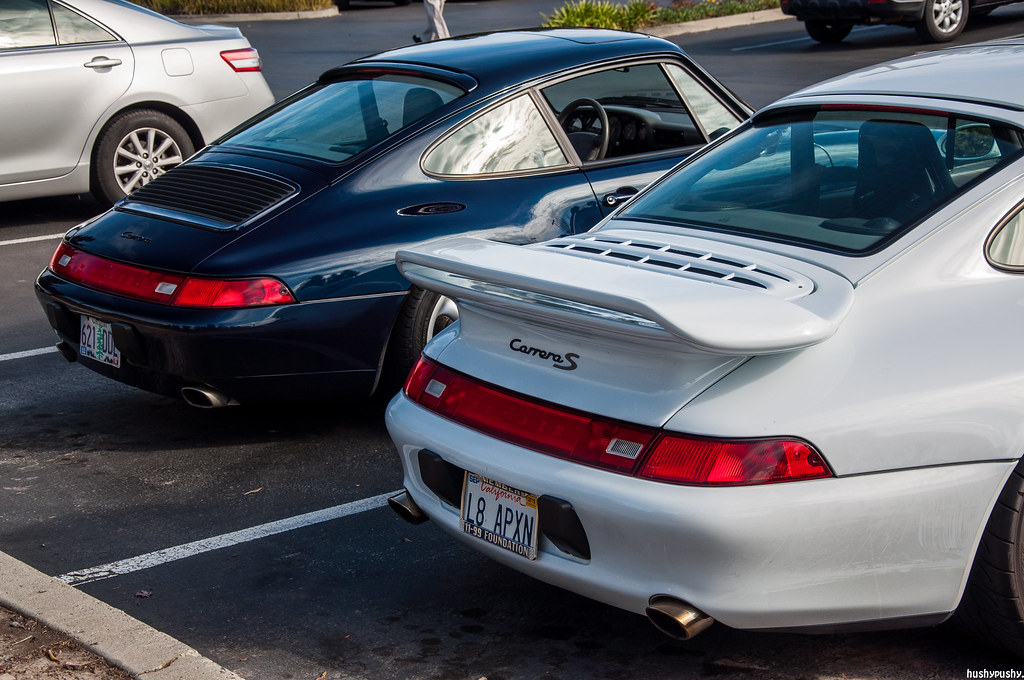 Do you prefer the narrow body with no accoutrements, or the wide body with some aero? 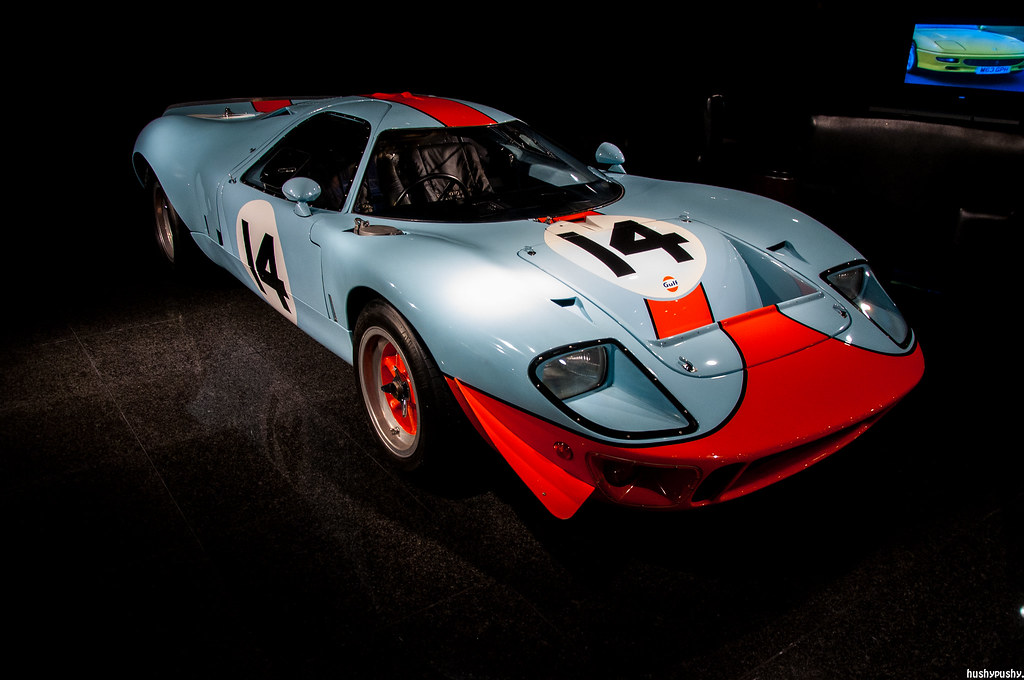 As we were getting ready to leave, Brendan mentioned that he had two free tickets to the museum for us, since he wasn’t planning on going again anytime soon. Unfortunately, the second floor was closed for repairs, but who cares? It was free! Pictured above is NOT a Ford GT40, believe it or not. It’s actually a Mirage M1, which was based on a Mk1 GT40, at least. 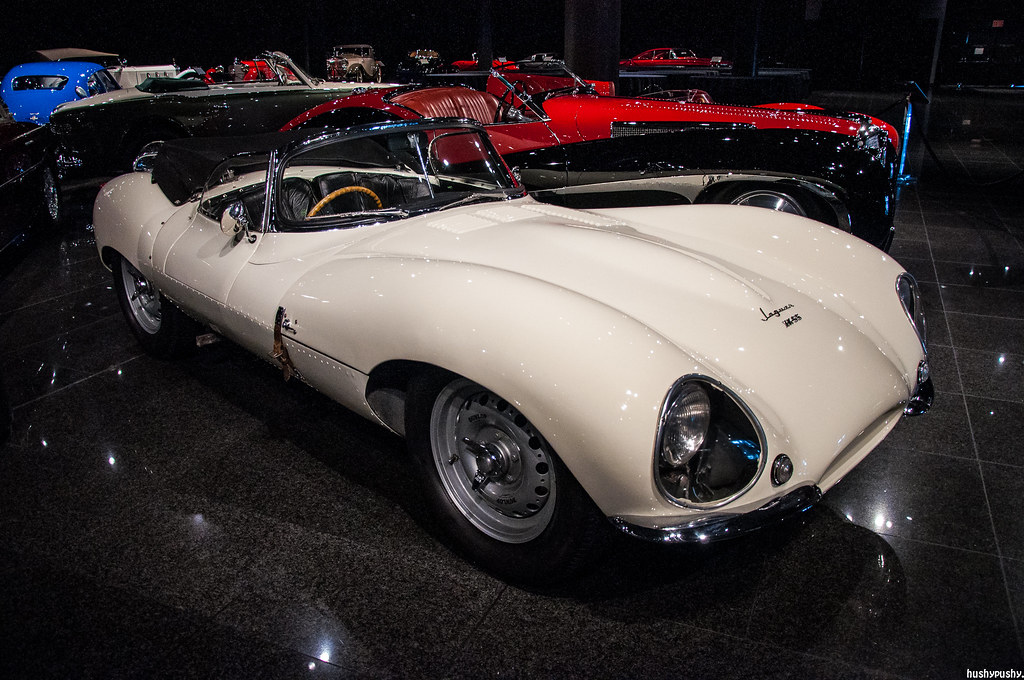 Other highlights included this Jaguar XKSS… 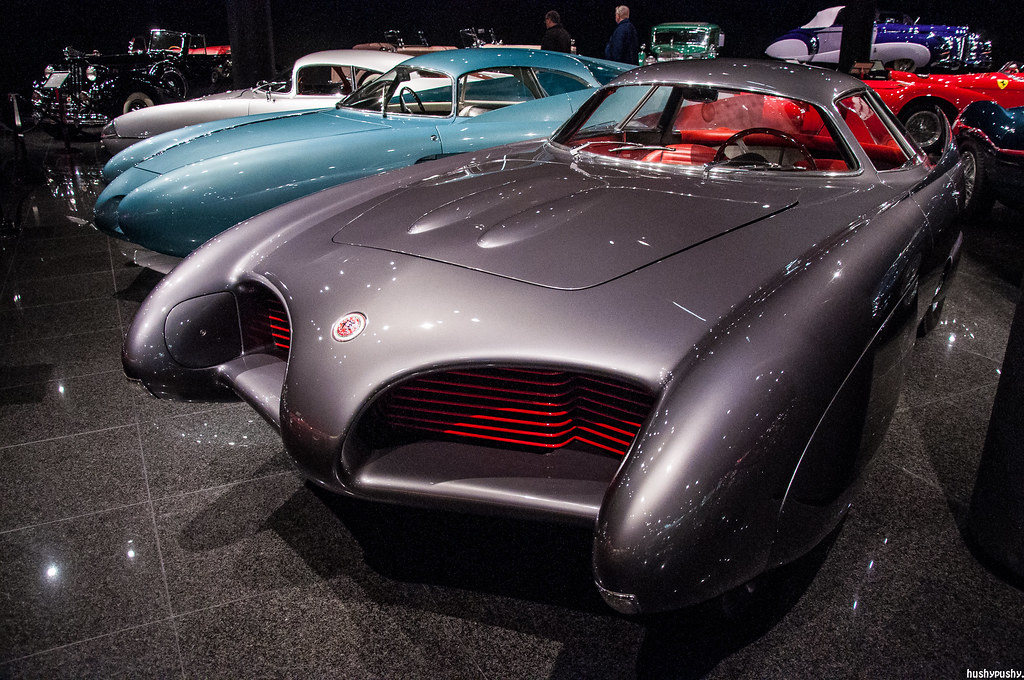 …and these crazy Bertone-designed Alfa Romeo “BAT” concepts from the 50’s. (and no, that’s not “Bring a Trailer”, it’s “Berlinetta Aerodinamica Tecnica”) 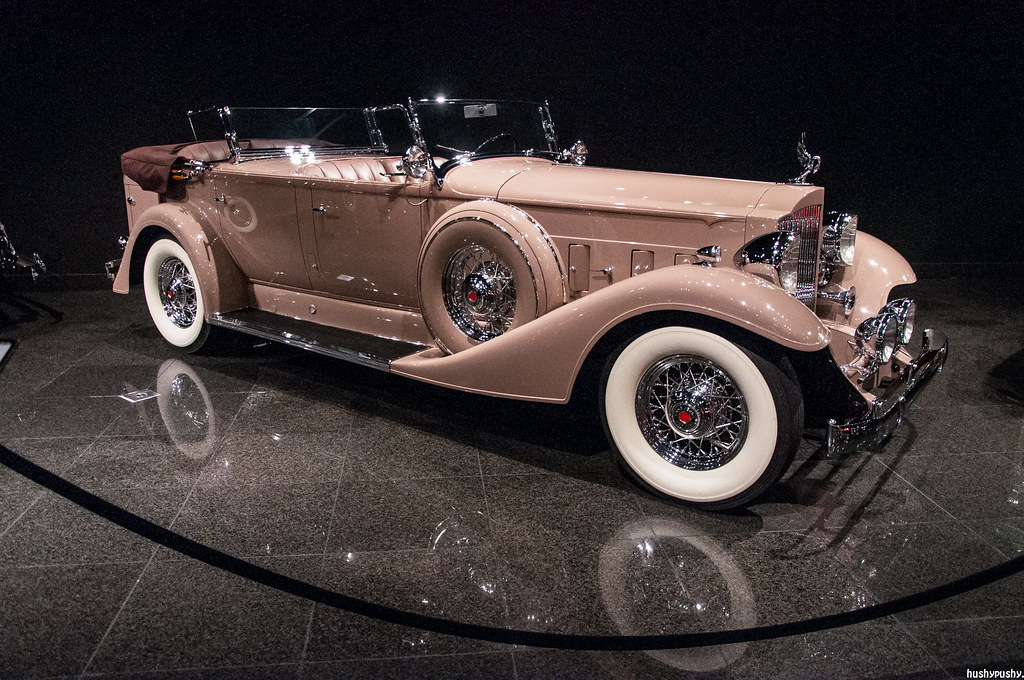 Judging by the amount of time I spent taking in its majesty, my favorite thing in the museum had to be this 1933 Packard Sport Phaeton. Only two were built that year; not surprising for such a ridiculous car built in the depths of the Great Depression. Not sure I’d want to be exposed to the elements in such an ostentatious beast.

Next on the Star Road menu is that 993 in a bit more detail. Watch this space.