Every family car needs a halo version. This is not a fact, or even something backed up by research: it’s just my opinion. One of the reasons that halo cars exist is to help a brand make a connection from the bottom to the top; they’re the link that proves your poverty-spec model contains the basic ingredients to become a fire-breathing monster. For example, my sister had a base model Audi A4, which was kind of lame. But just knowing that there’s a beefy V8-powered and fender flare-equipped version out there made her feel a bit cooler. The same goes for the relationship between the C250 and the C63 AMG, or the Cadillac CTS and CTS-V, and of course the classic BMW 3 series/M3 relationship. 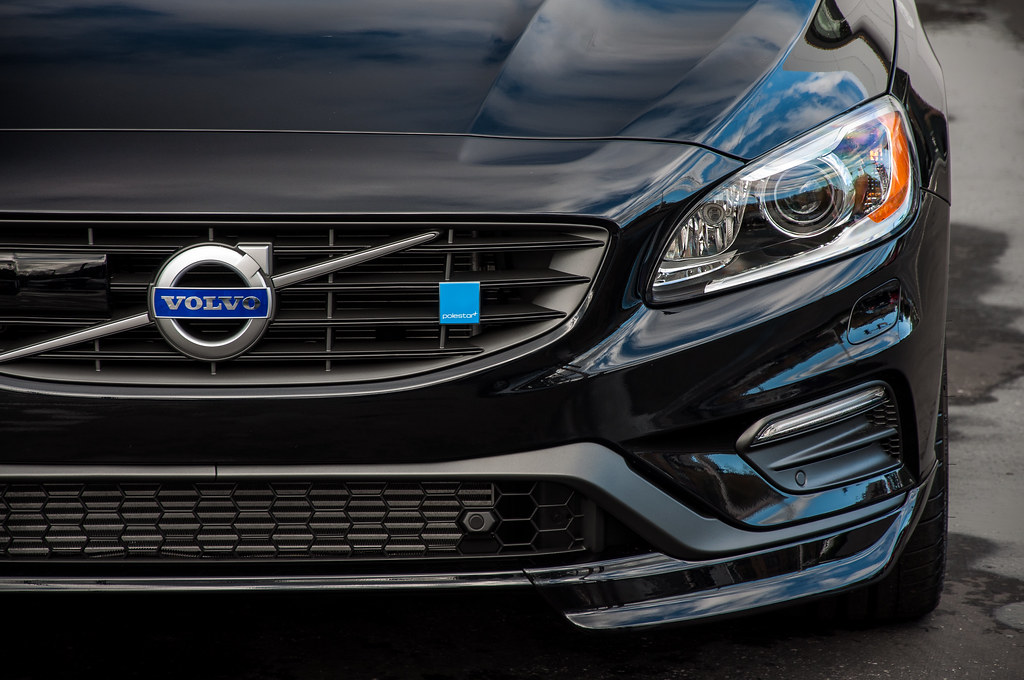 And that’s why this car is important. 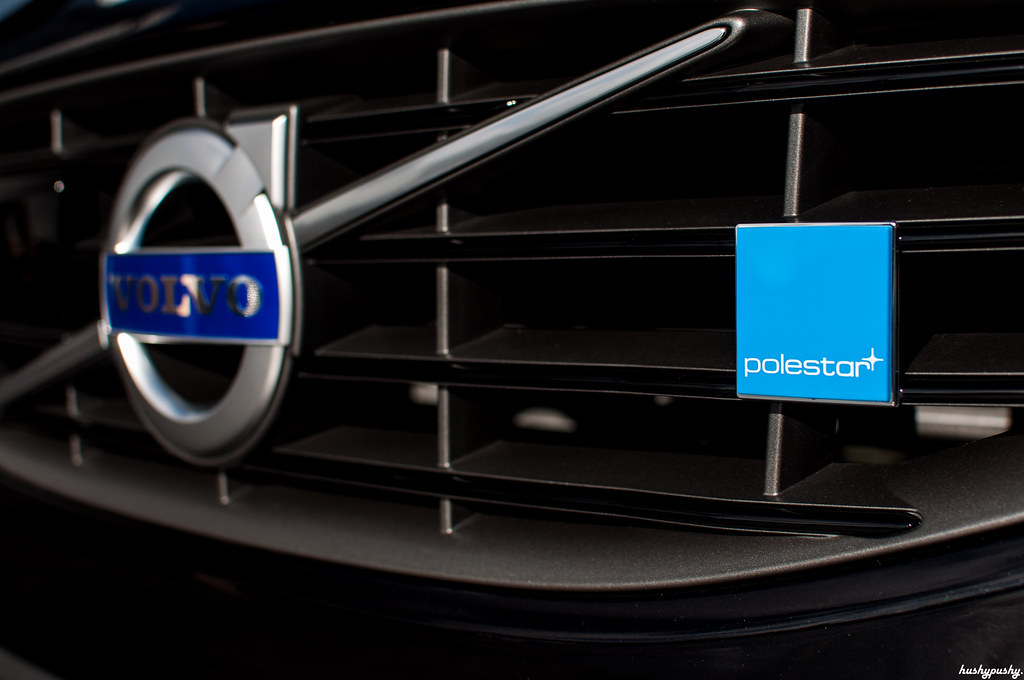 Sure, you can get a Polestar badge on a regular V60, signifying that your engine is in a higher state of tune. But the regular Polestar treatment–a simple ECU flash–pales in comparison to what this car offers. 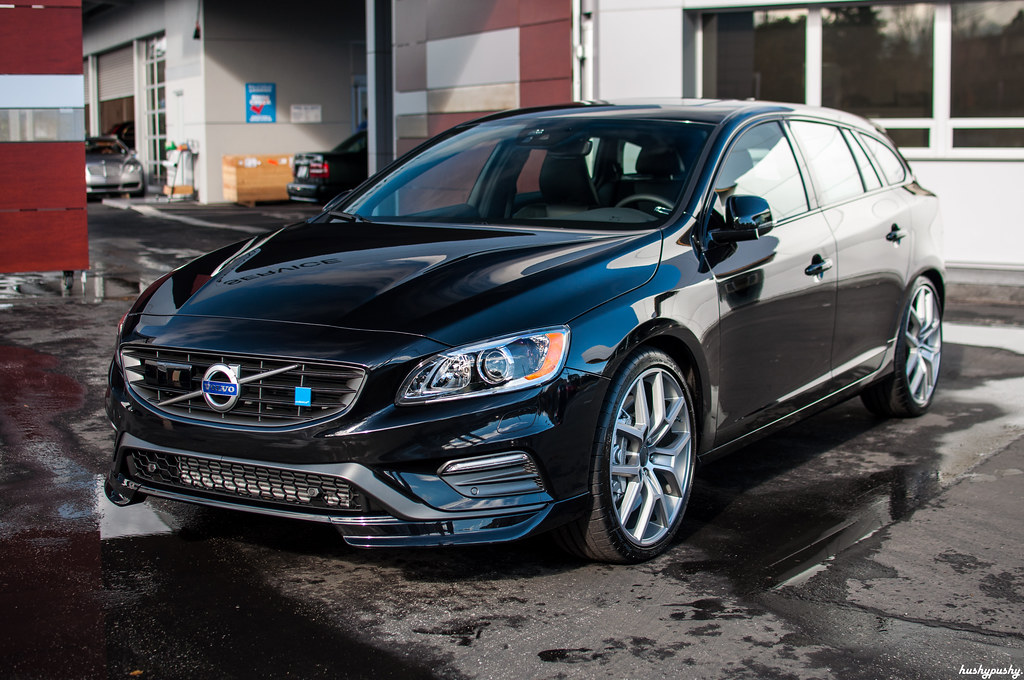 Let’s start on the outside. Subtlety is the name of the game here; the R-Design front bumper gets additional mini-lips up front… 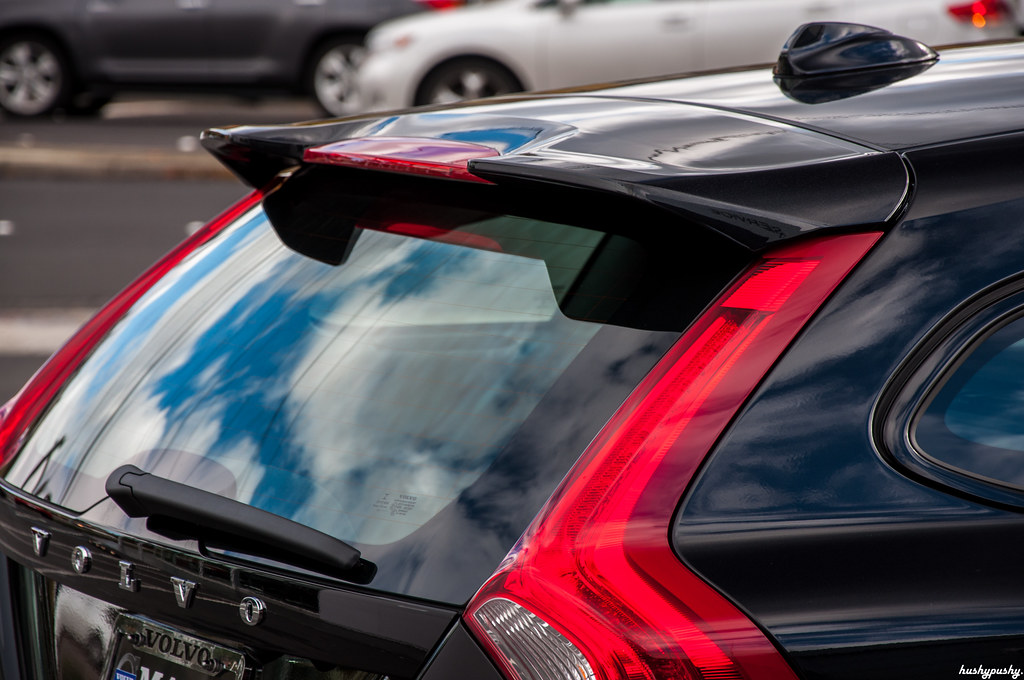 …while out back you get a larger, dual-prong rear spoiler, as well as… 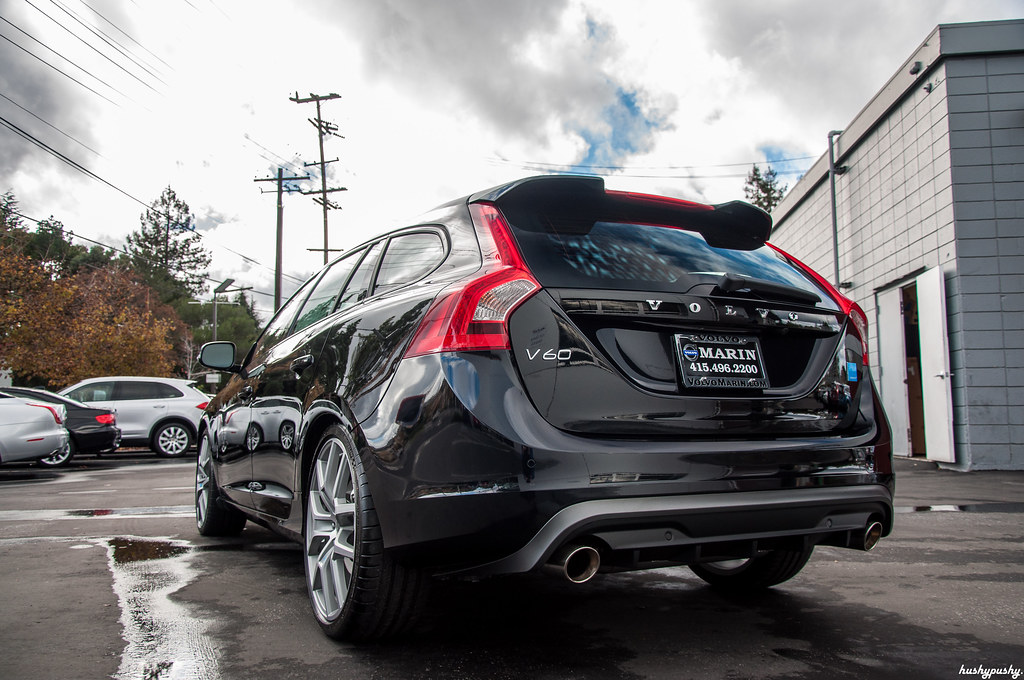 …a “rear diffuser”. Like the one on my FR-S, it’s a non-functional piece, but it does look better than the normal rear bumper. 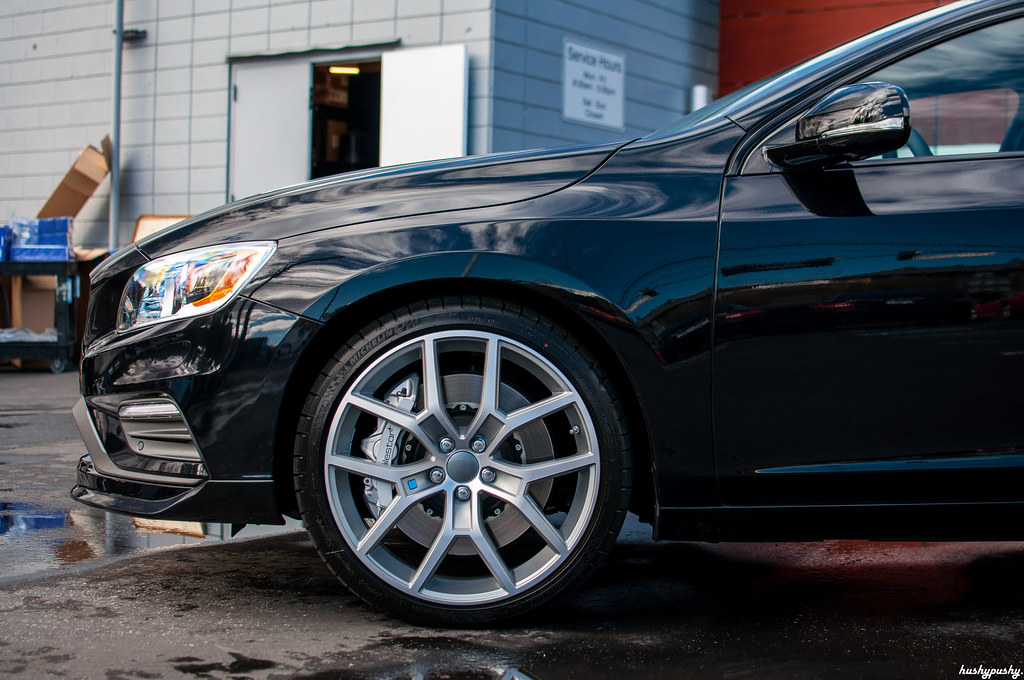 The other big visual change is those huge 20″ wheels wrapped in 245/35ZR20 Michelin Pilot Super Sport rubber. It blows my mind that when I was growing up, twenty inches was a wheel size reserved for huge SUV’s; you would never think of putting such a size on a small performance car. Now with the advent of giant brakes (by Brembo in this case), huge wheels are commonplace. 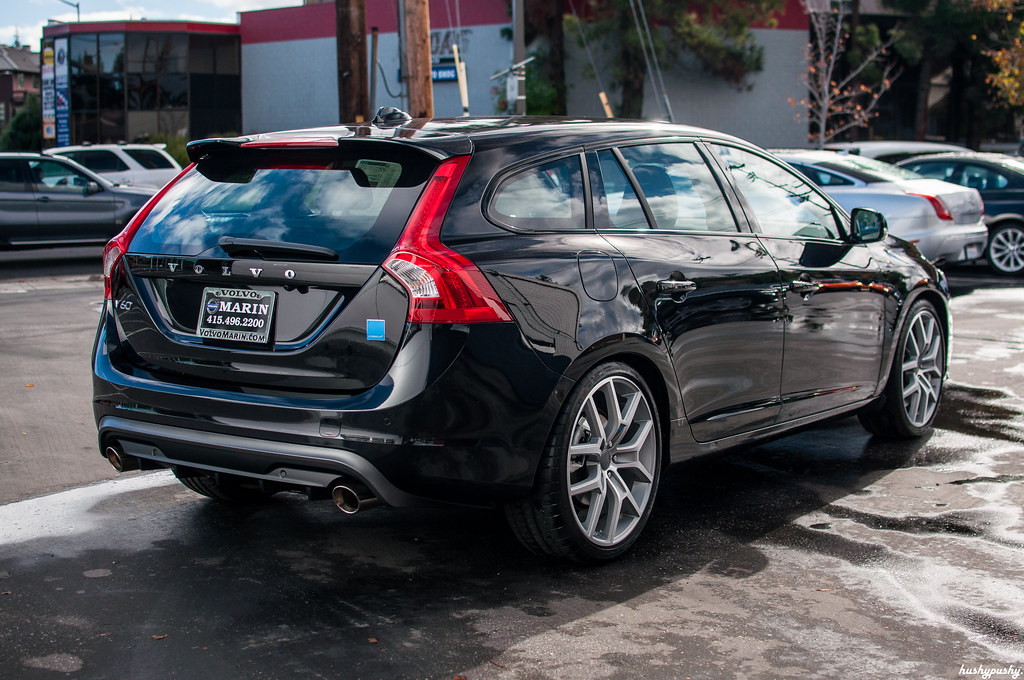 However, the biggest and most important changes are something I couldn’t really even get pictures of: Eibach springs on Öhlins dampers (which are manually adjustable!) and the Polestar-tuned Haldex AWD (which unfortunately, is not. H4x coming soon?). Bushings in the rear have been firmed up and the AWD programming is said to be more rear-biased than the standard car, which is music to the ears of any performance driving enthusiast. 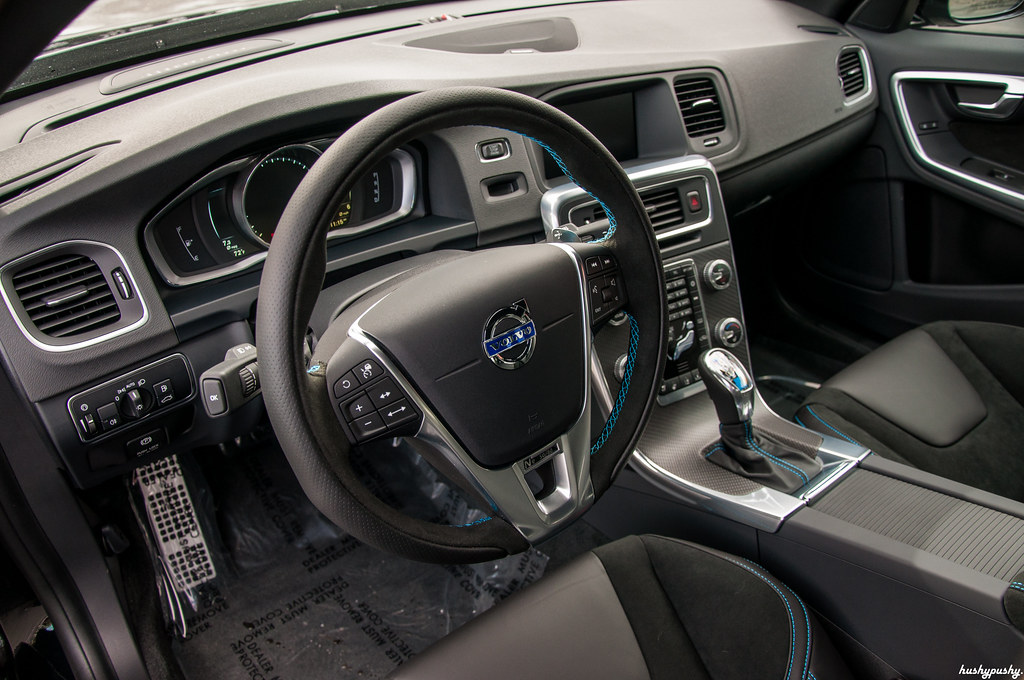 If you thought they were conservative on the exterior, check out the interior. This is where opinions diverge wildly: one train of thought says this is a very simple, clean, Scandinavian design and the new Polestar touches are a cherry on the cake, while another will say that the interior is too simplistic and cheap, and the Polestar mods don’t go far enough to turn this into a real sports or luxury car. 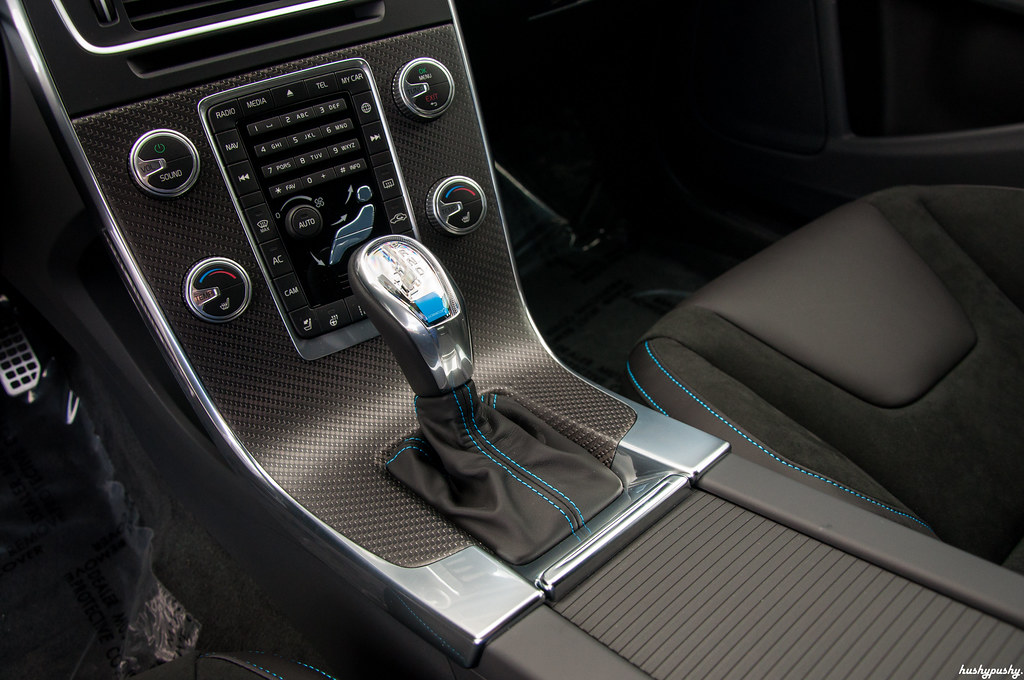 Count me squarely in the “simple is good” camp. One of the reasons I prefer the Volvo interior to the equivalent BMW, Audi, or Mercedes offerings is its simplicity. Everything is well laid out and easy to find and use. 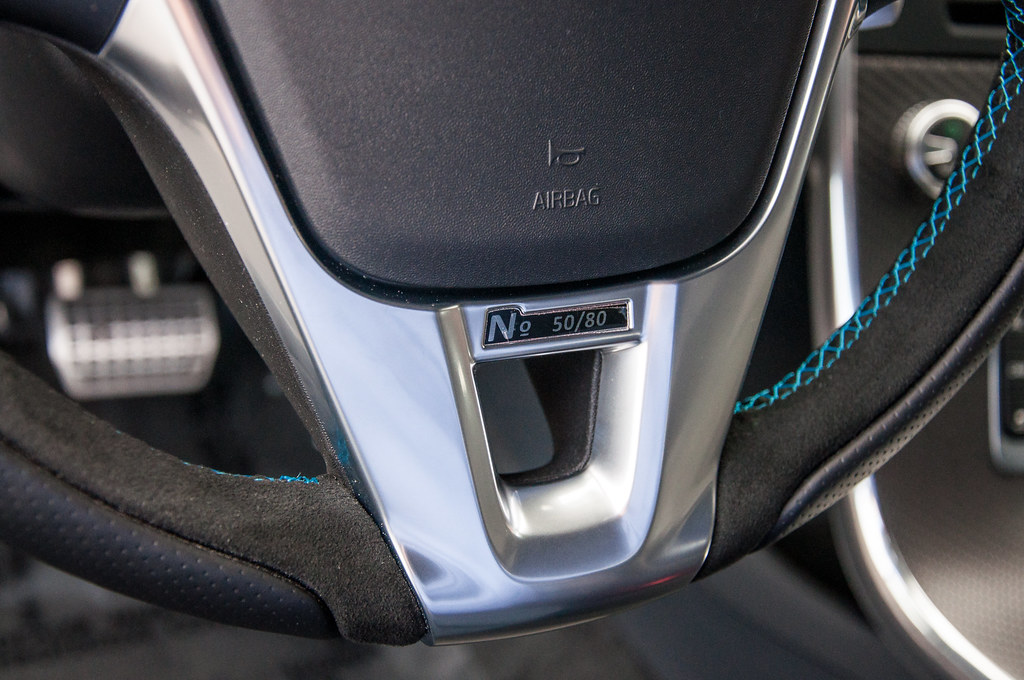 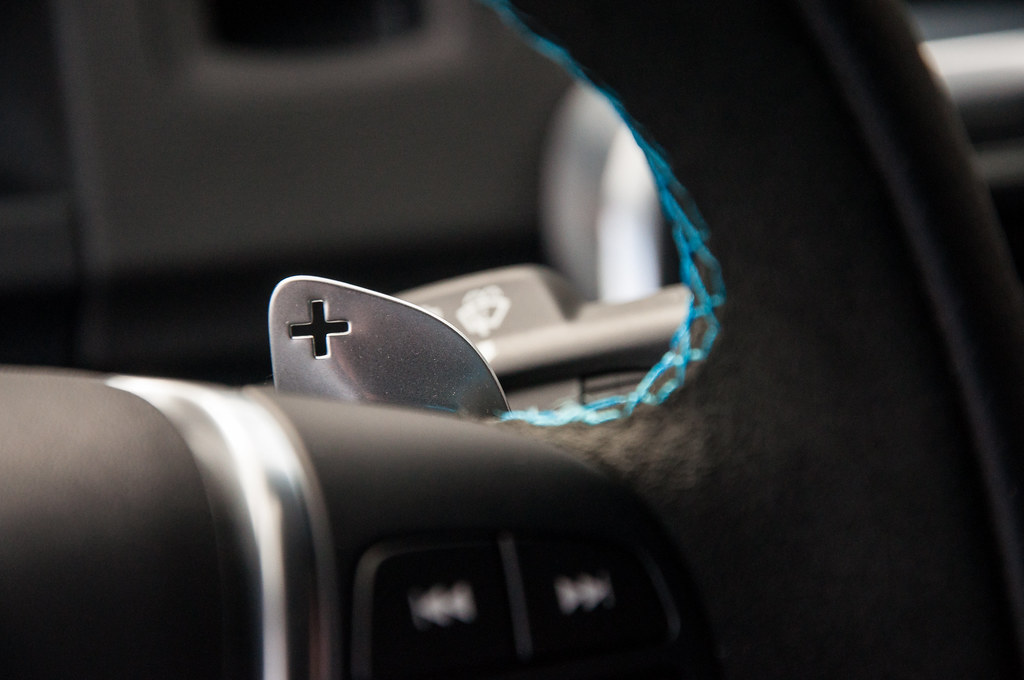 And the additional Polestar touches? Spot on. I think there’s just the right amount of flair without going over the top. 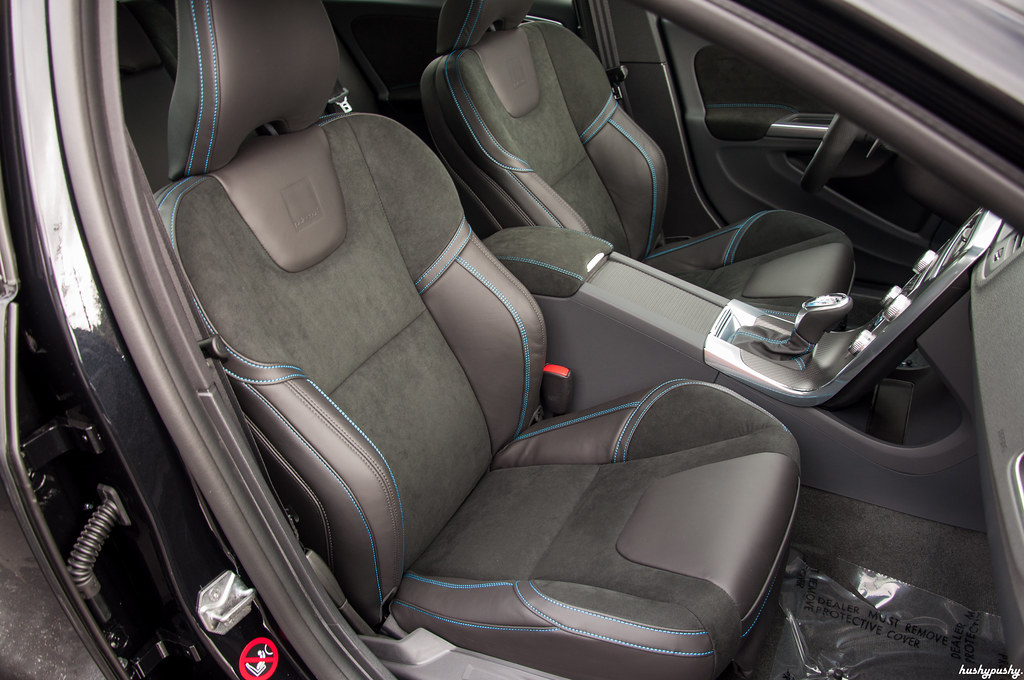 Although I have to say, these seats are borderline. They are exactly the same as the normal Sport Seats, but wrapped with a bit of alcantara and topped with blue stitching. To be honest, I really just wish it was one material–either all alcantara, or all leather. 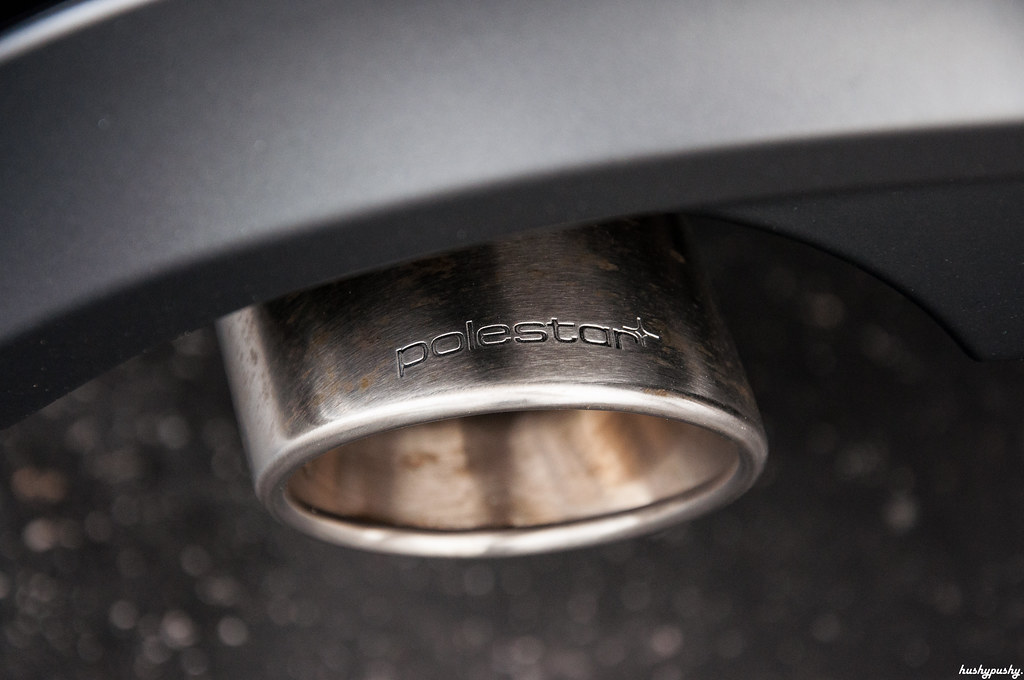 Although the tuned engine sounds fantastic through its bespoke exhaust, the engine bay itself is a bit boring. 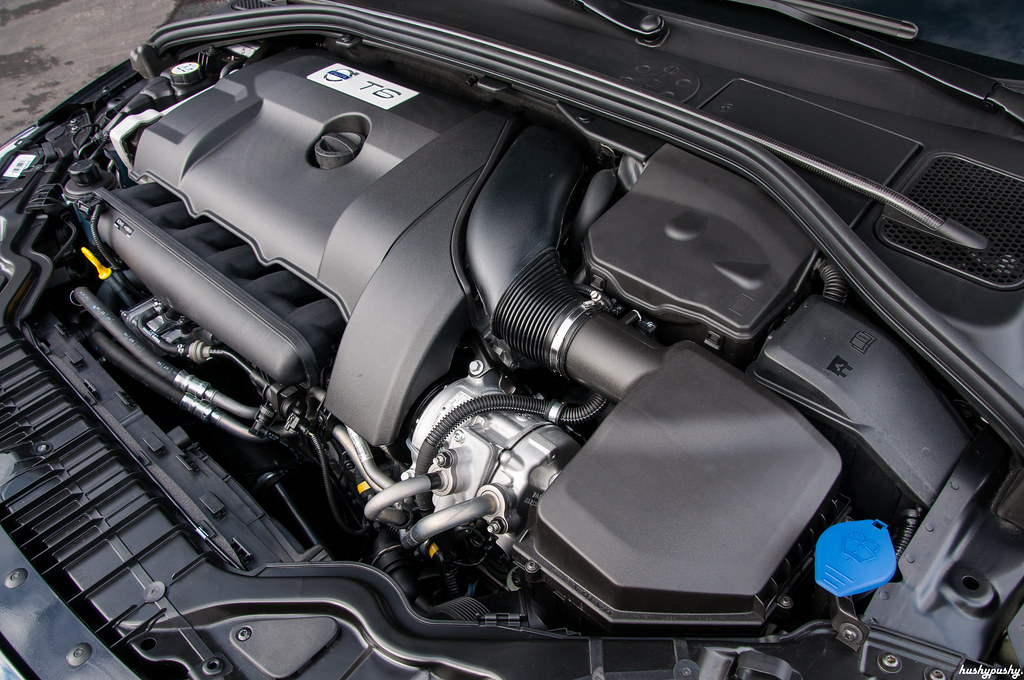 See what I mean? It looks like any other T6 engine bay. Well, except for the carbon fiber strut bar. Unfortunately, you can’t exactly see the extra 45 ponies and 49 torks this car’s tune gets you (which is about twice as much as the standard Polestar tune). I know that doesn’t seem like a lot in today’s world of turbo tuning, but reliability is the name of the game here. This car is still covered by the standard four year/50,000 mile warranty like any other new Volvo. 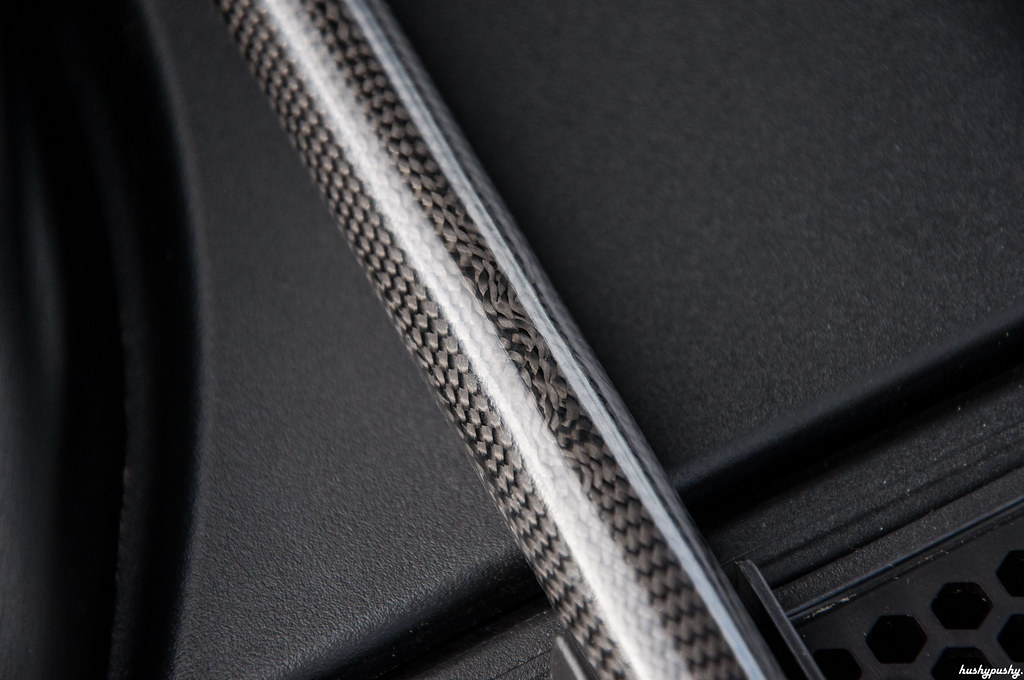 When you deal with McLaren’s and other supercars all day every day like I do, you come to expect immaculate carbon fiber weave. Unfortunately, that’s just not always the case, as you can see here. 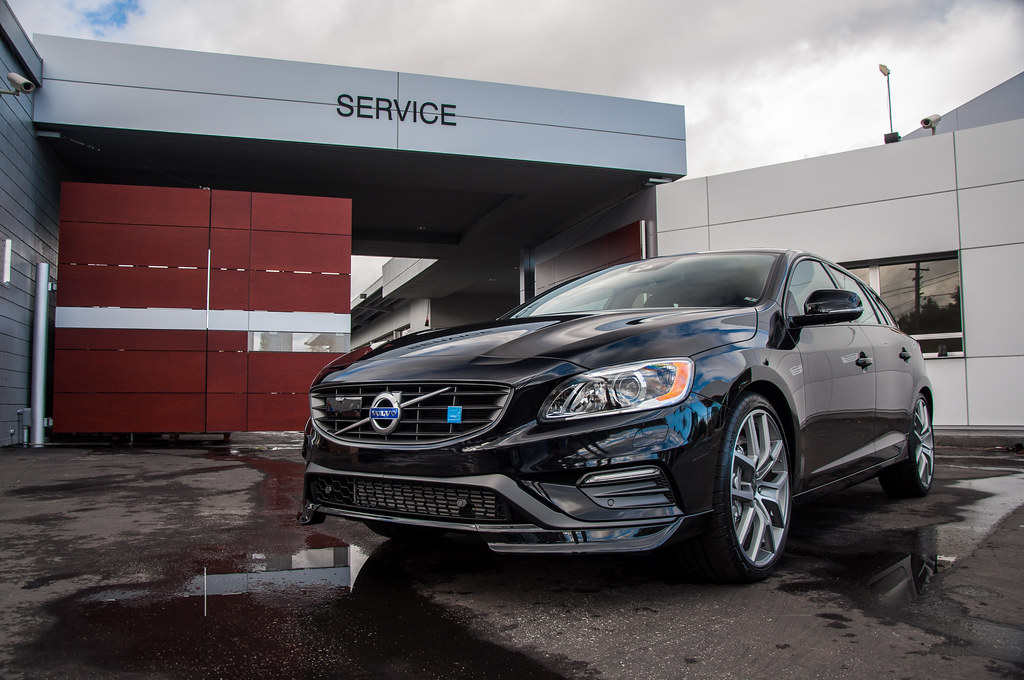 But what’s the point of this car? 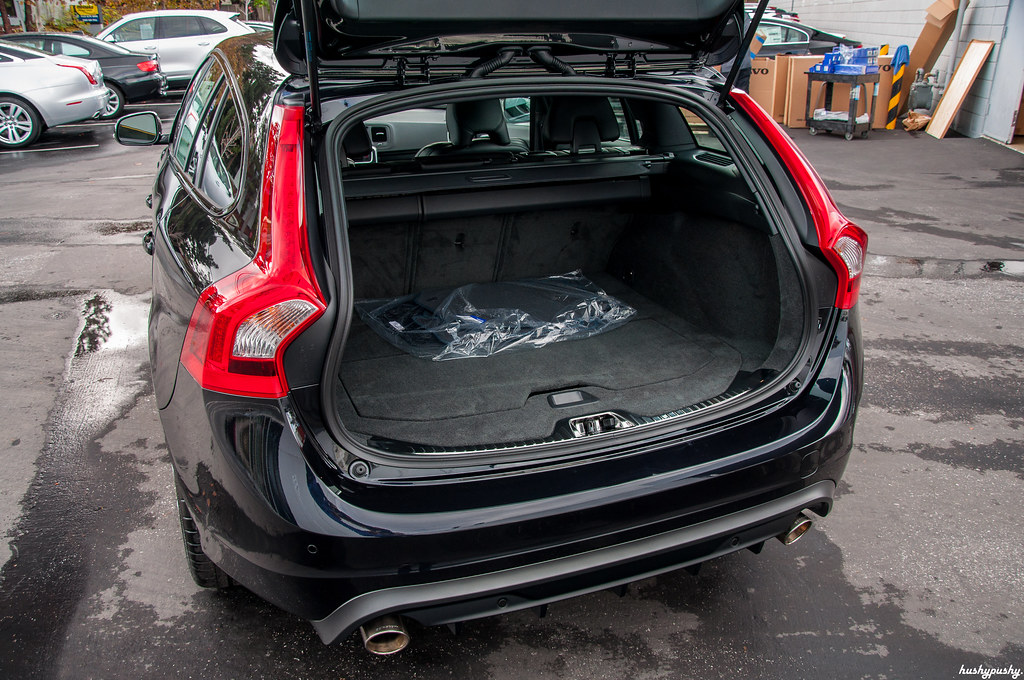 To me, the appeal of this car is that it’s a black sheep; the weird choice in a marketplace filled with strong choices. Someone who buys this car will likely face the same barrage of questions I get about my FR-S: “Why didn’t you buy XYZ car instead?” 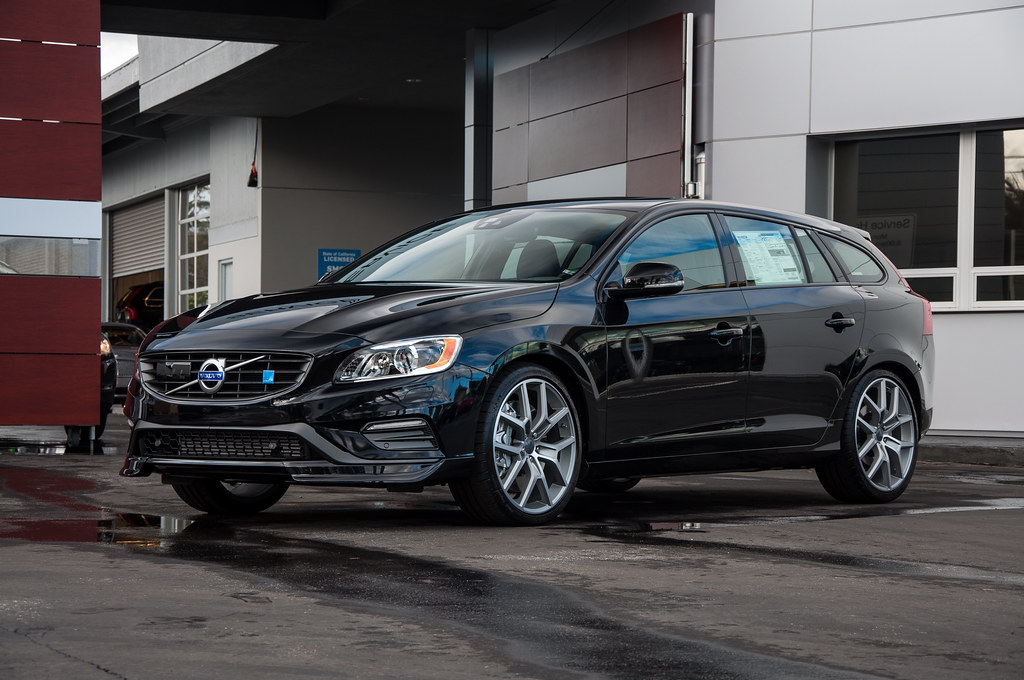 Strangely for a Volvo, but perhaps appropriate given the actual demand, this is an extremely limited edition car available via special order only. In fact, only particular “Polestar approved” dealerships can even take delivery of the car, similar to how only certain Nissan dealerships are equipped to sell and service GT-R’s. All told there will be 750 of these Polestar Volvos available to the entire world, with 120 units of that allocation for the USA: 80 V60’s and 40 S60’s. 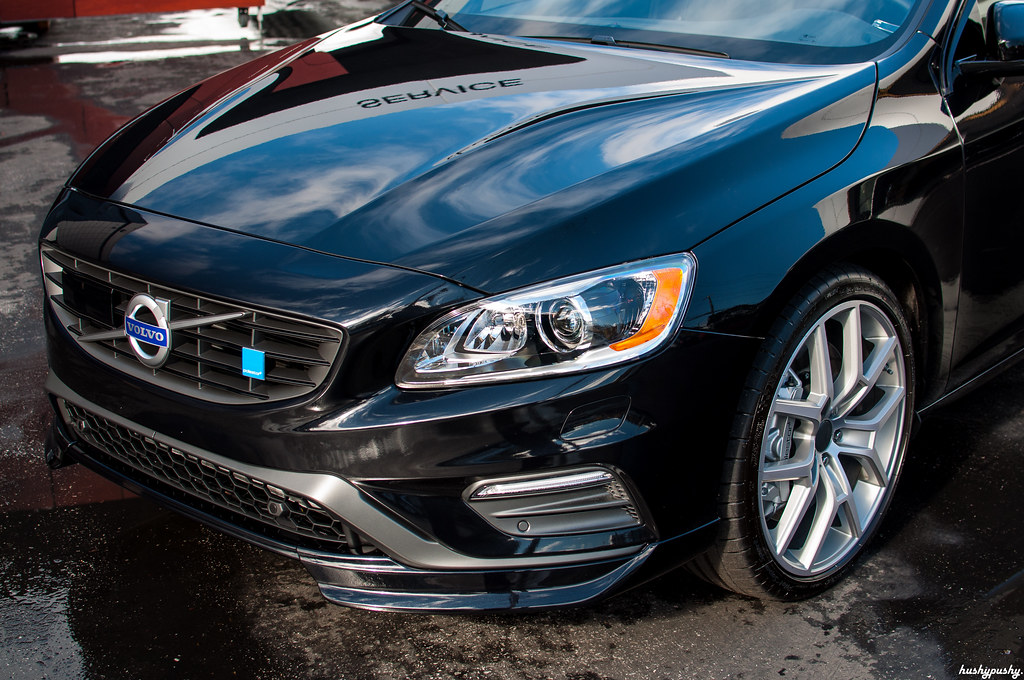 At the end of the day, this is a car you buy because you really want one. No one will read Consumer Reports, Car and Driver, or even The Car Lounge and decide that the best logical choice is to purchase a $62,000 Volvo–they just won’t. Whoever bought this car brand new did so because they had some genuine interest in it. And for that reason, if you ever see one of these on the road, tip your cap to a modern black sheep.