On a daily basis I experience my fair share of distractions at work, although I would hardly consider that A Bad Thing. In fact, what I could classify as things that distract me from doing my job are the exact reasons I created this website. Whether it’s a Cobra replica interrupting a photoshoot or car flipped over in the street in front of the showroom, it seems like not a day goes by where I’m either distracted, or can find a distraction. 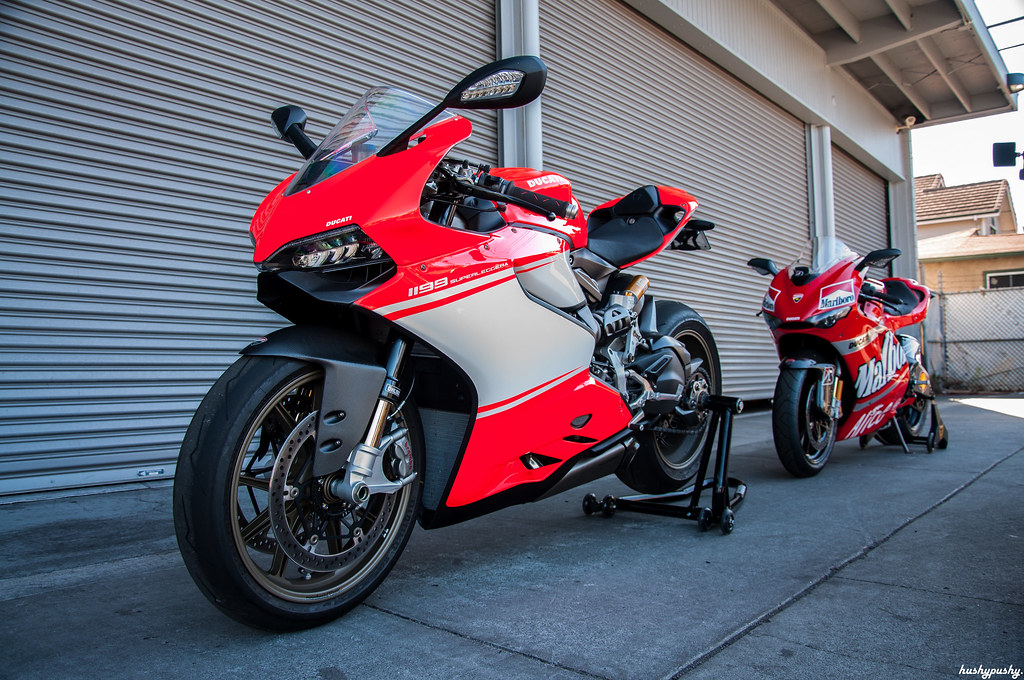 So when I saw a few Ducati’s roll up, I didn’t really think anything of it. After all, a few guys who work here ride Ducati’s, and exotic car and exotic bike dudes mingle often. 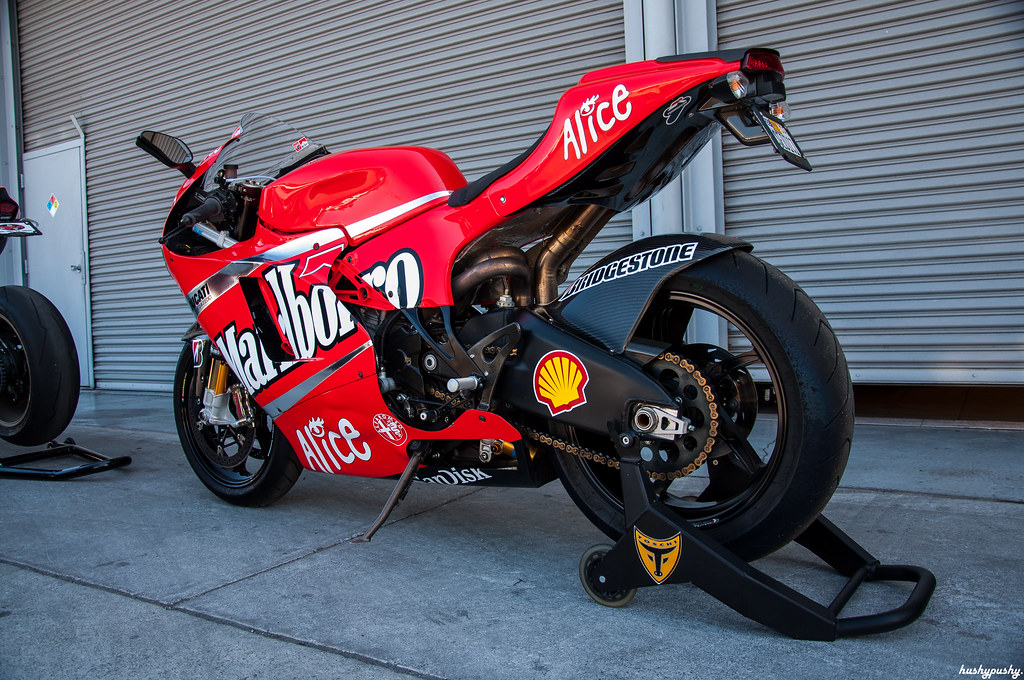 Quite literally, I have no idea what I’m looking at, other than the fact that it’s a Ducati and looks incredibly menacing. By the way, the biggest, fastest motorcycle I’ve ever ridden was a Honda CT70, which is a tiny trailbike that makes a whopping 5.5hp (and at 8000 RPM, no less!). 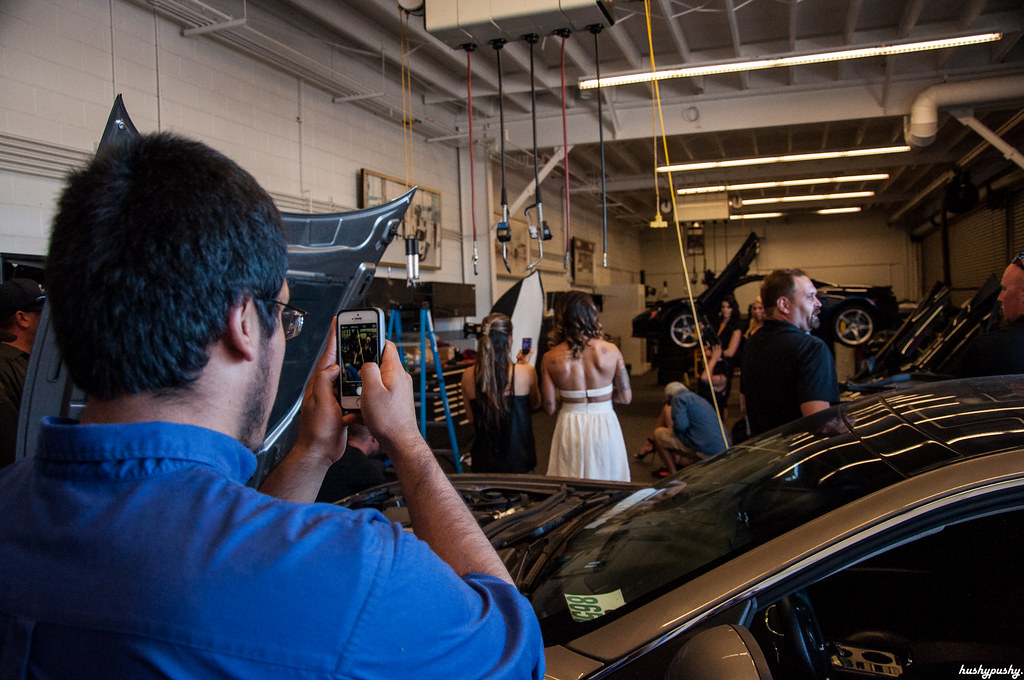 But…why are the doors to the shop closed during the peak hours of the morning? I peeked inside and I saw five models, a whole armory of semi-automatic weaponry, and a full photographic staff to take advantage of it all. Of course, the majority of the dealership’s staff (which is heavily skewed toward the male gender) stood on the outskirts of the shoot wielding phone cameras. 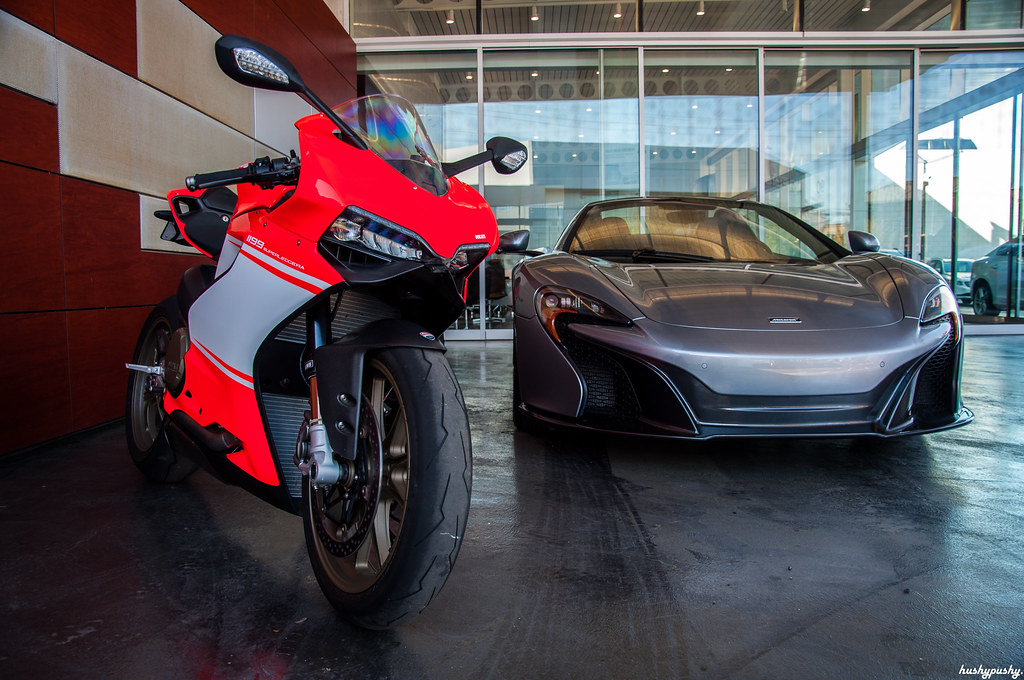 Cars, bikes, and guns: Boys’ Toys if I ever saw ’em. I know even less about guns than I do about motorcycles, but those firearms looked like the type of assault rifles you see tearing up the middle east (or Metal Gear Solid, if you’re a nerd like me). My boss commented, “Why does anyone need a gun like that?” Quite a fair point; it’s not like you need a semi-automatic assault rifle to take down anything during hunting season or down at the range.

But what about a motorcycle with 200hp, or a car that does 0-60 in 3.1 seconds? Why does anyone need a Dodge with 707hp? The answer is: we don’t. We have those things because we can. Whether you’ll ever need to burst 15 rounds/second with your assault rifle or hit 125mph in under nine seconds in your McLaren is irrelevant–the point is that they’ve been engineered to do so. 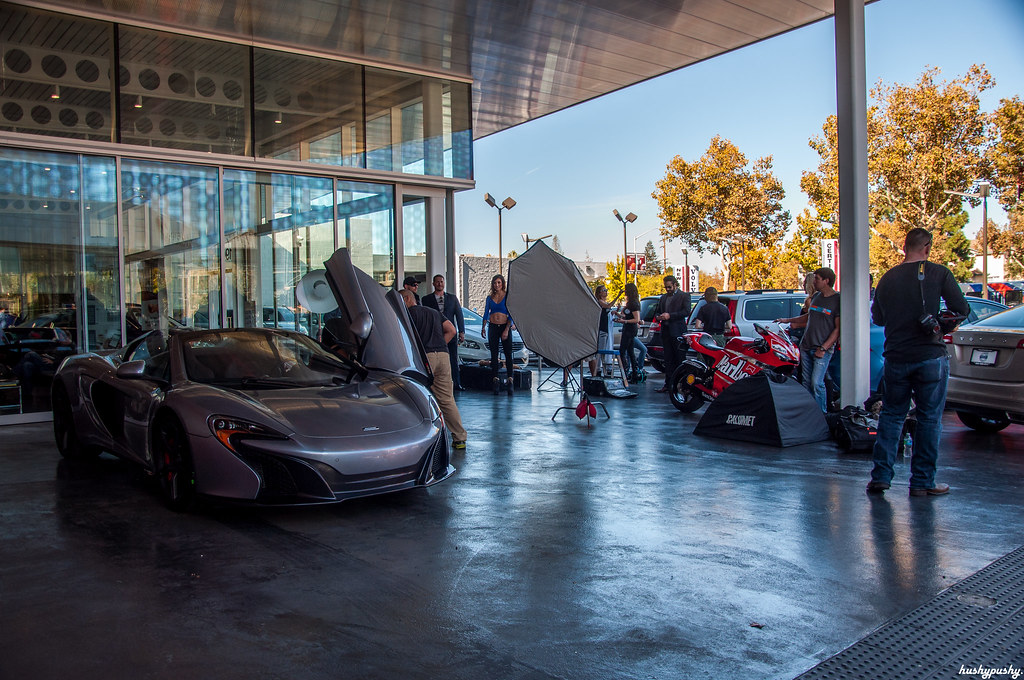 Professional shoots are fascinating. I’m used to heading out into the hills by myself or maybe with a friend and shooting a car with natural light, then doing some light post-processing. Not here, though. A squadron of models was attended to by separate hair and makeup artists, and the photographer had his assistants helping with prep and execution. 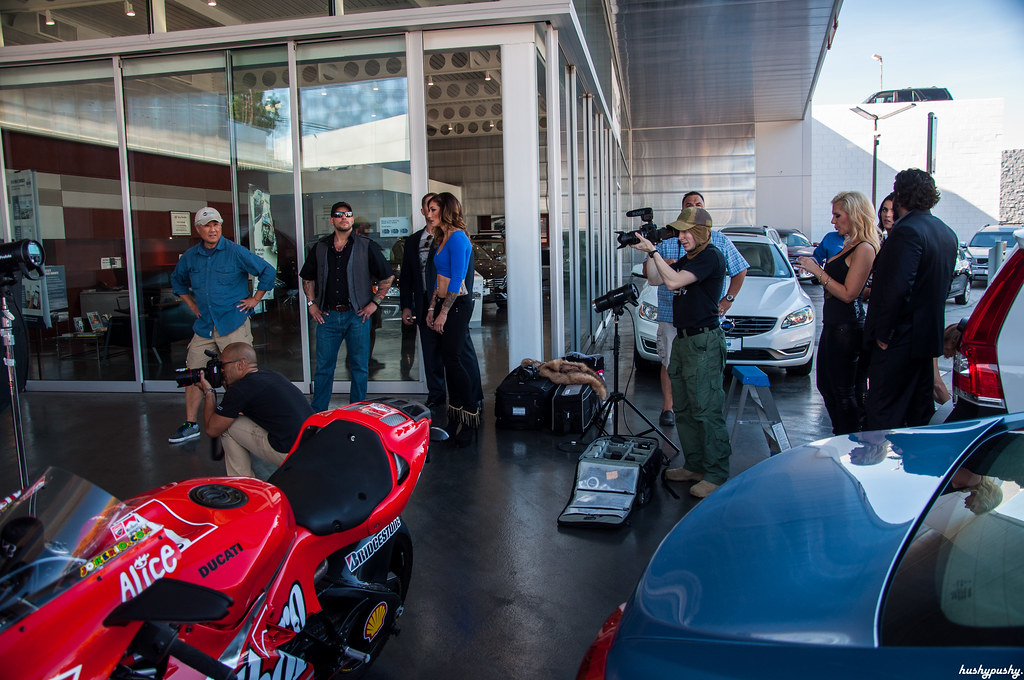 There was even a dude filming what I can only assume is the behind-the-scenes documentary about the shoot. He was the definition of Business, with his serious demeanor and Desert Storm attire. I never saw him speak a single word to anyone. 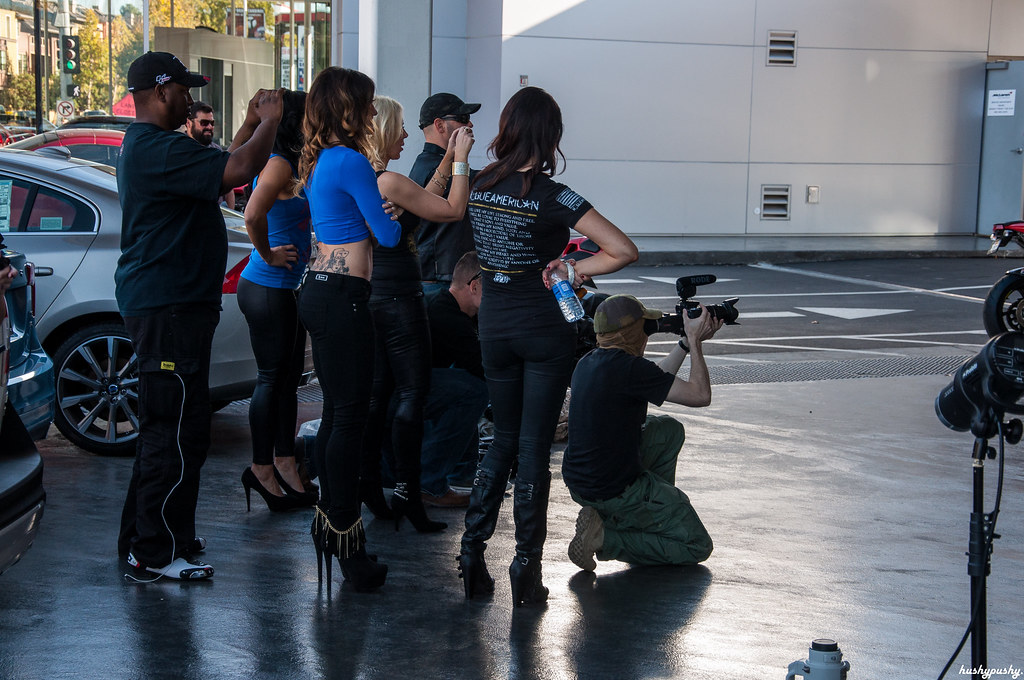 Quite a lot of standing around and watching is involved with these things. 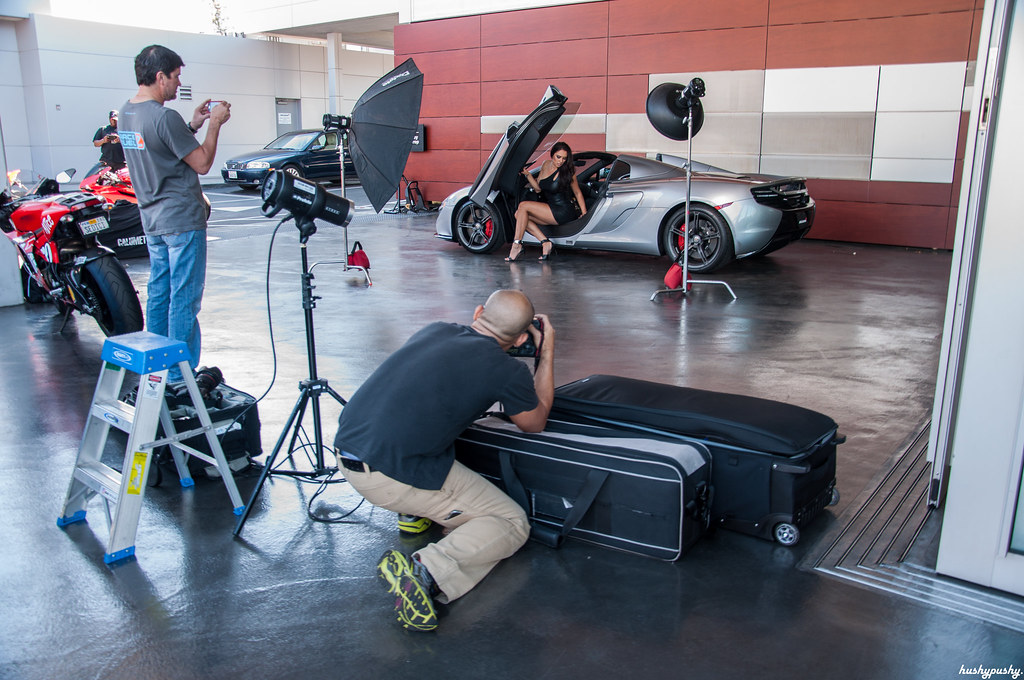 But at the end of the day, what really impressed me was the professionalism and work ethic of the team. While my coworkers were busy wearing out the digital zoom on their phones, I observed a lot about the logistical aspects of the shoot. I also started to think about how firearms are a pretty good metaphor about the good and bad aspects of living in a “free” society such as ours; but that is not the sort of thing this blog is about. And, for now, neither are scantily-clad professional models. Sorry.